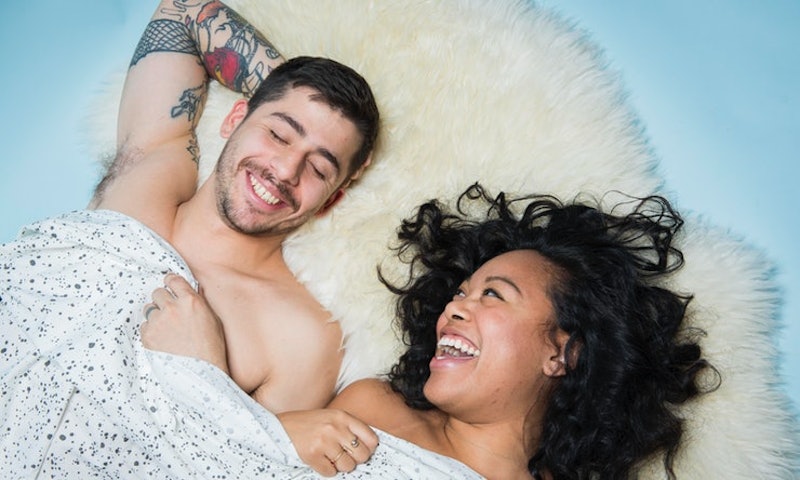 Sometimes, it can feel like we've come a long way in terms of gender equality and sex. Many women are proud to speak openly about their sexual experiences and some have even reclaimed the word "slut" and enjoy casual sex for sex's sake. But occasionally, you come across something that reminds you that there's still a long way to go.

In 2018 SKYN Condoms Millennial Sex Survey of over 4,000 millennials, there was one finding about our attitude towards women and sex stuck out as a little more serious — and a lot more disappointing. Over half of respondents — 54 percent — said that they perceive women negatively if the woman has had multiple sexual partners. This is so upsetting and is yet another reminder that even though we may think we've achieved a higher level of gender equality and sexual empowerment, we still have a long way to go.

"I’m not surprised by those findings," relationship therapist Aimee Hartstein, LCSW, tells Bustle. "As much as we might like to feel like we are fair and equal in how we perceive gender and sexuality, I’m not sure that we really are. Many women are out there owning their sexuality, and I do think that there is more space for that than in the past. However, they always run the risk that they will be judged harshly for their sexuality in a way that men never have been." It's not fair, it's not OK, but it undoubtedly seems to still be the way that it is.

And here was the even more worrying part: it was actually women who were judging other women more harshly. In fact, 61 percent of women reported looking down on women who had multiple sexual partners. Now, there's obviously a lot of misogyny and almost certainly some hypocrisy in that. If you consider the fact that we're getting more sexually open — 41 percent of respondents said that they sent nudes at least once per week — it's so problematic that we're still judging other women for their sexual choices. "Women have always judged each other more harshly than men," Hartstein says. "I think there is an instinctive/unconscious level of competition that CAN (it certainly doesn’t always) arise between women. If a woman is seen as either being too full of herself, or too confident, or too attractive; she’s often disliked by other women. I think that judging another woman for having too many sexual partners is, in part, an offshoot of that."

It's really unfortunate. The number of sexual partners a person has had is no indication of how safe they are or even how sexual they are. And it definitely doesn't say anything about how good of a person they are. You can have sex 10 times with 10 different people or you can have sex 400 times with one person. You can have sex with one person and be kinky as hell, or sleep around but be vanilla and shy in the bedroom. It's just a number. "When it comes to sexual partners, there is no correct number," Michal Naisteter, Philly-based Three Day Rule matchmaker, tells Bustle. "We don’t have a negative label for men who have multiple partners and we also lack a vocabulary that praises women for exploring their sexuality. Once women realize that slut shaming each other is damaging we can start supporting one other as we grow intellectually and sexually. Women can be sexually liberated and worthy of respect. Protip: Follow the 'Unslut Project' – a place where the women can share their stories and the word slut is not an insult."

It's so important to tackle the judgement women face for their sexual choices. How can we stop it? Well, it's important to keep owning it and pointing out the hypocrisy and the double standards. I'm amazed at how frequently I hear my liberal friends still make the occasional judgmental comment about how many people someone has slept with — even when they've slept around and had a good time themselves. It's important to keep calling people out for doing this, keep talking about sex, and keep embracing sexuality. And no matter what, it's important to not look at other women as competition.

"Despite society becoming more progressive and hook-up culture becoming mainstream people still judge others based on sexual habits and ‘kill counts’," Laura Bilotta, Dating Coach And Matchmaker At Single In The City. "... As a society we pit women against each other and that animosity is internalized, even if we don’t realize it often as women we are shaming others for their choices. In her book "Yes Please" Amy Poehler gives us the key answer when it comes to other women’s decisions (and people in general for that mater), which is 'Good for her! Not for me.' That sentiment is perfect because when it comes down to it sexual history is nobody’s business except for that person and their current partner. The rules around dating and sexuality are becoming more fluid so we need to stop talking about them in such rigid ways. In the end it really comes down to treating others the way you want to be treated, if you don’t want someone talking about how many people you have or haven’t slept with than don’t do it to someone else."

The number of sexual partners someone has is not tied to their worth or their worthiness — it's not even representative of their sexuality. So keep owning it, and keep talking about it.

More like this
How Do I Deal With Both ED & Premature Ejaculation?
By Sophia Benoit
The Best Time To Date After A Breakup, According To Experts
By Bustle Editors
Are Quality Time & Physical Touch Love Languages Compatible?
By Lexi Inks
7 Women Share Their Best Orgasm Stories
By Lexi Inks
Get Even More From Bustle — Sign Up For The Newsletter