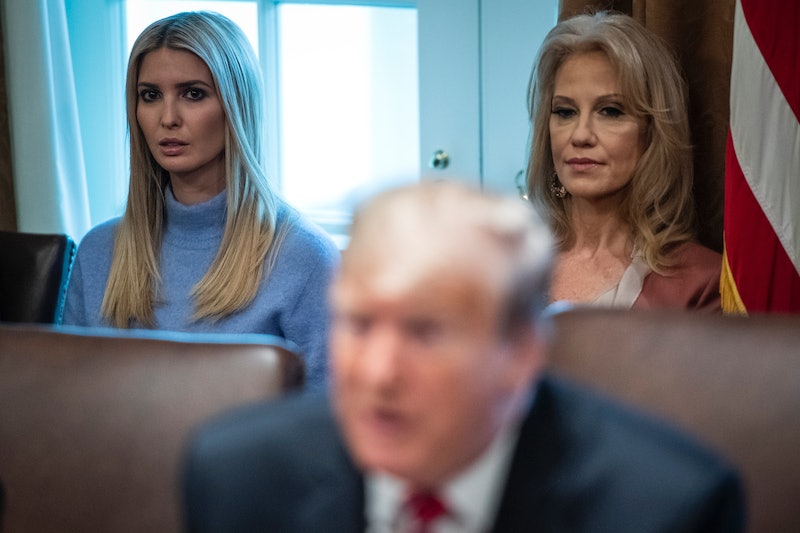 "Sweetie, your face looked very tired on television. Have you lost weight?"

That's one of more than a dozen alleged quotes revealed in the new book, A Warning, by Anonymous attributed to President Donald Trump. The soundbite, along with alleged Trumpisms that range from alarming — "Watch them start to choke like dogs." — to absurd — "[TiVo] is one of the great inventions of all times." — sets up Anonymous' claim that Trump "isn't a man of great character, or good character," but "a man of none."

Key to this claim is the idea of Trump's misogyny. Let's be clear, though: calling Trump out on his anti-woman rhetoric is a good thing, but it doesn't make a feminist or an ally out of Anonymous.

Anonymous "is just now beginning to understand what women, queer folks, and members of ethnic and religious minorities have been saying about the man in the White House." Trump's "Grab 'em by the p*ssy" comments supposedly didn't disturb the author of A Warning when they came to light in 2016. Nor did Anonymous seem particularly bothered by a now-deleted Trump tweet from 2015 — "If Hillary Clinton can't satisfy her husband, what makes her think she can satisfy America?" — a tweet they now say is full of "smoldering sexism."

"It should be evident by now that Trump is one of the more offensive public figures in recent times," Anonymous writes in A Warning. "His behavior is quintessentially unseemly, from crude rhetoric and vulgar jokes to immodest public reactions. There are far too many examples, so we will choose one category. Nowhere is this more apparent than in his attitude toward women. Many in the Trump administration are put off by his misogynistic behavior, which began well before the election."

Now that Trump's "inappropriate comments about women haven't abated" since his swearing in, however, Anonymous is concerned that what many pundits and surrogates wrote off as "locker-room talk" may actually be indicative of the man's lack of character.

"I've sat and listened in uncomfortable silence as he talks about a woman's appearance or performance," Anonymous writes. "He comments on makeup. He makes jokes about weight. He critiques clothing. He questions the toughness of women in and around his orbit. He uses words like 'sweetie' and 'honey' to address accomplished professionals. This is precisely the way a boss shouldn't act in the work environment."

Sitting in silence while a man judges women based on their physical attributes — "Beautiful piece of ass. Good shape.... Fat. Fat ass. Stupid. Nasty woman. Dog. Ugly face. Dogface. Horseface. Disgusting." — is not the sort of white knight behavior that Anonymous seems to think it is. Nor is their assertion that women "don't need 'safe spaces' set up in the West Wing." We have dozens of laws and regulations to ensure that the workplace is, in fact, a safe space from sexual harassment and discrimination, among other evils.

How Anonymous can bemoan Trump's comments against women, and then go on to say that there's nothing, really, that should be done to protect women from Trump, is beyond any capacity to explain. The author of A Warning seems scandalized to admit that "Trump's commentary on specific women in his administration sometimes will happen right in front of them," as if such comments would be A-OK when made behind a person's back.

Of course, the anonymous author of A Warning isn't the only person not speaking out about Trump's alleged anti-woman behavior as it occurs. It seems clear from reading the book that no one in the White House is interested in anything other than tacitly reinforcing Trump's misogynistic behavior.

Anonymous recounts the following alleged comment from Trump about migrant people, which they claim to have heard secondhand from an aide: "We get these women coming in with like seven children.... They are saying 'Oh, please help! My husband left me!' They are useless. They don't do anything for our country. At least if they came in with a husband we could put him in the fields to pick corn or something."

The story concludes with the allegation that: "The handful of attendees in the room shifted uncomfortably in their chairs but said nothing."

"At times, his sentiments border on what many women today would call predatory," Anonymous concedes. They go on to discuss Trump's 2013 tweet about rampant sexual assault in the U.S. military, as well as the Access Hollywood tape, leaving the rest of us to wonder — just where the heck has Anonymous been all this time?

Anonymous' A Warning is out now from 12 Books.