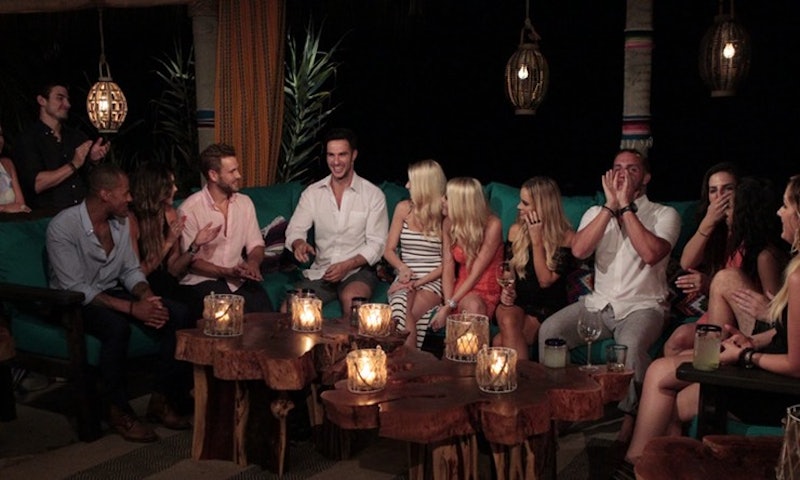 On Sunday, June 11, Bachelor fans were shocked to learn that filming of Season 4 of Bachelor In Paradise would be shutdown due to "allegations of misconduct" reportedly involving two of the cast members. In a statement to The Hollywood Reporter Warner Bros. confirmed that production was suspended:

We have suspended production and we are conducting a thorough investigation of these allegations. Once the investigation is complete, we will take appropriate responsive action.

Earlier: Throughout Monday, many past contestants and contestants from this particular season have been offering their messages of support and any insight that they could give fans as to what happened. Exact details have not be shared, but an anonymous contestant shared their story with People about how filming shutting down occurred. The contestant understandably chose to remain anonymous, but painted quite the story of the situation as it unfolded, and it sounds like many of the contestants were shocked.

“We were told to stay in a certain part of the [resort] while they figured out what the hell had happened. We knew something bad had happened; there was a dark energy that came around the house. You have to understand that we weren’t even there a week. The game hadn’t even really begun yet.”

According to People, there was allegedly a sexual incident that involved contestant DeMario Jackson and an unidentified female contestant in which the female contestant allegedly may not have been able to give consent. According to TMZ's reports, this female contestant is Corrine Olympios. TMZ has reported that sources close to Olympios claim that she was not able to give consent, but allegedly doesn't "fully blame" Jackson, because, like her, he was allegedly drunk. Reportedly, she allegedly feels production should have stepped in. TMZ also reported that sources close to Jackson alleged that he and Olympios did engage in oral sex, but that things were fine the next day until a producer allegedly filed a complaint regarding the alleged incident. Bustle has reached out to Jackson and Olympios for comment, but has not yet received a response.

The contestant speaking to People continued,

“They stopped taping anything, and we were just kind of there, waiting in limbo. We couldn’t talk to each other about what we knew. On Thursday, one of the camera guys told me that they were probably going to shut down production. I didn’t realize that it was that serious until then. I was like, ‘wait, they’re thinking of canceling the show?’ It hadn’t even crossed my mind that they’d do that.”

The contestant claimed that the possibility of filming again for this season is unlikely:

“[The producer] was like, ‘I don’t think that’s realistic.' She said that there was an investigation going on, and that could take days, weeks or even months. And by that time, we all have lives and jobs and things to go back to, so it just wasn’t going to work out. They told us that we’d be considered for future seasons and opportunities in the franchise, but that this adventure was probably over.”

The source claimed that the other cast members thought that the situation should have been stopped before it got this far, because many of them had quit their jobs and planned this show far in advance. Still, even while they were on set, the source said that many things weren't known. They said, “I don’t know everything that happened. Obviously I didn’t suffer like other people are suffering, but still. It just sucks.”

All in all, it sounds like a very difficult and heavy situation for everyone that has been involved. Hopefully a resolution can be found quickly and safely.