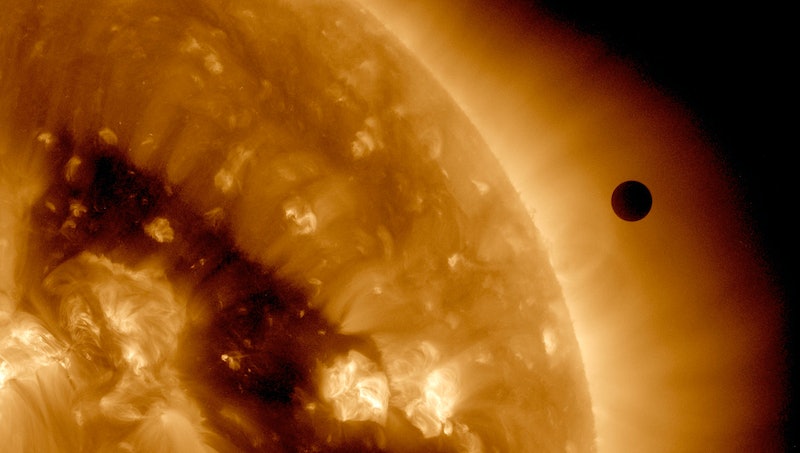 After years of research, astronomers have made a huge scientific discovery that could change the way they study the galaxy. Researchers confirmed the achievement on Thursday, July 12, in the journal Science, stating that astronomers have detected a ghost particle that has solved a century-old mystery. What exactly is a "ghost particle?" It might sound like something spooky and otherworldly, but (unfortunately) this is not confirmation that ghosts exist. Instead, it's a revelation about the galaxy.

Ghost particles are also known as "neutrinos." According to Space.com, "Neutrinos are nearly massless subatomic particles that have no electric charge and therefore interact rarely with their surroundings. Indeed, trillions of these 'ghost particles' stream through your body unnoticed and unhindered every second." Although they're all around, they are incredibly difficult to detect, and scientists have been struggling to do so for a very long time.

Why are ghost particles important? While most neutrinos come from the sun, a small percentage have extremely high energies, and were rocketed into our planet from very, very deep space out of a huge black hole. Because neutrinos are nearly impossible to detect, astronomers have not been able to find one to trace it back to where it came from — until now.

It was discovered by the IceCube Neutrino Observatory at the South Pole, using more than five thousand sensors buried more than a mile beneath the ice. These sensors detected one single ghostly neutrino as it interacted with an atom, and then scientists were able to trace the particle back to where it came from, which was an entirely other galaxy — a "distant blazar, a huge elliptical galaxy with a fast-spinning supermassive black hole at its heart."

This is the first time scientists have found something like this, and the discovery allows them to learn so much more about the universe and light. The Washington Post explains exactly how important this discovery really is, saying, "This is physics at its most mind-boggling and extreme. Researchers compared the breakthrough to the 2017 detection of ripples in space time caused by colliding dead stars, which added gravitational waves to scientists’ toolbox for observing the cosmos."

Neutrinos are important because they convey information across time and space. They travel through the universe and cannot be harmed or lost, and scientists call them "messengers." Heidi Schellman, a particle physicist at Oregon State University and computing coordinator for a different neutrino detection project, the Deep Underground Neutrino Experiment, who was not involved in the research, told The Washington Post, "They're very clean, they have simple interactions, and that means every single neutrino interaction tells you something."

In other words, ghost particles will reveal important and otherwise unknown information about the galaxy to those that study them. The only thing is, you need to be able to detect them in order to find out this information. Now that scientists have done it once, hopefully they'll be able to do it again. Schellman says that pairing neutrino detections with light observations could answer long unanswered questions about things like "distant cataclysms, test theories about the composition of the universe, and refine their understanding of the fundamental rules of physics."

Not only were astronomers able to trace the neutrino back to where it came from, they also answered an unsolved mystery: the source of cosmic rays. As Space.com says, "Cosmic neutrinos go hand in hand with cosmic rays, highly energetic charged particles that slam into our planet continuously." Detecting the neutrino allowed scientists to realize that blazars are "accelerators of at least some of the fastest-moving cosmic rays as well." This has been something astronomers have been wondering about since 1912.

Considering the fact that the detection of one neutrino could answer a mystery like that one, we can only imagine what detection of more of them could reveal about the universe. It's a pretty wild thought. As astroparticle physicist and IceCube spokesman Darren Grant said, "It's a brand new vision on what's happening in the universe." That's very exciting indeed.