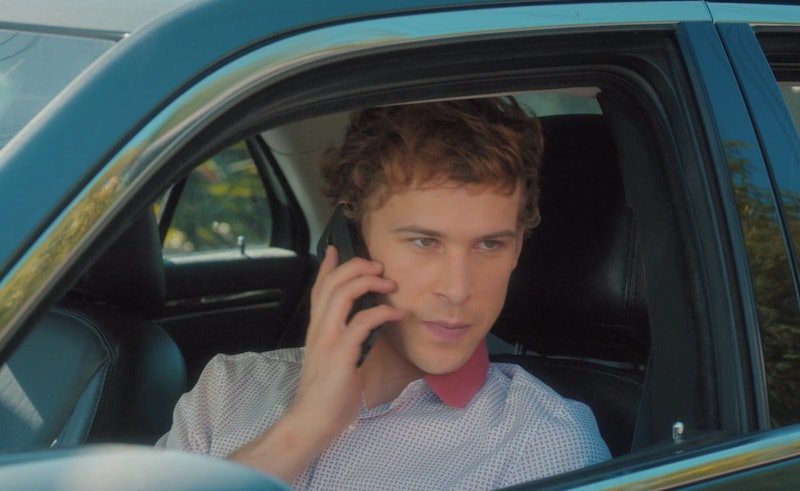 Spoilers ahead for Jane the Virgin Season 5, Episode 9. You'd think after all of this time on Jane the Virgin, Luisa (Yara Martinez) would be a bit more careful with the people she lets into her life. After all, she's the one who started this whole sequence of events, accidentally artificially inseminating our protagonist way back in the pilot. But here we are in Season 5, and Luisa is in the middle of Bobby and Sin Rostro's plot on Jane the Virgin, whether she's aware of it or not.

It's so exhausting to go through the endless Luisa cycle: She declares that she's changed! Rafael tells Jane that Luisa's changed! Jane believes that she's changed, and then Luisa goes and does a bad thing. And repeat. And that's exactly what happens in "Chapter 90," with Rafael finally allowing his sister to meet his children. And while it's high time for Luisa to meet her nieces and nephew, it's unclear what her motivations are, and whether she realizes what her new best friend, Bobby (Tommy Dorfman), is up to.

Audiences will recall that we first saw Bobby in the first episode of Season 5, when an imprisoned Rose held a video conference with all of her henchmen, which consisted of six women and the aforementioned minion. In the following episode, he went to Luisa's door at the Marbella with pie, claiming that he lived just down the hall. And Rafael's sister, the gullible person she is, invited him right in. While we know that he's working for her ex-girlfriend, Sin Rostro, it's unclear whether she knows what's going on.

Cut to Episode 8, where it's clear that they'd developed a rapport. Bobby called Luisa on the phone, convincing her to ask Rafael to meet his children. "I don't know," she told Bobby. "I want to, but we have such a rocky history." However, her new friend pushed her to ask him, since she's "sober as a judge" these days.

So here we are in Episode 9, where Luisa does indeed ask Rafael to meet her nieces and nephew. If she didn't have such a checkered past, it would be a reasonable request. But after some thinking, Rafael and Jane make it happen, and it seemingly goes great. Mateo asks his aunt a few brief questions before begging his dad to let them go to the beach together. However, it appears that this was all a ploy to get them out of his apartment so that Bobby could do...something.

Just then, Rafael gets a call from Dennis — Michael's former partner — informing him that all of Rose's money from her black market scheme, Satin Road, was transferred into an account under Luisa's name. At that same moment, Rafael's sister gets a text from Bobby, asking how it's going. "Perfect. You?" she responds. "Also perfect," he writes, currently breaking into Rafael's place to do something nefarious.

So while it's too soon to tell what exactly Bobby's doing, it's clear that this is what Rose was referring to when she told her underling to move up the timeline. There's also that mysterious number that Luisa showed Rose back in "Chapter 83," which could very well be Luisa's bank account number that was mentioned in "Chapter 90."

Furthermore, this also begs the question of whether or not Luisa's involved this time around. I'd like to think that she's being blindsided by Bobby, because the alternative would be that she's betraying Rafael for the umpteenth time. And the happy-go-lucky expression she has on her face when she responds to her newfound friend — and that Bobby's text was so cryptic — would seem to support that theory.

There's also the fact that in Episode 1 of this season, audiences saw Rose's female henchmen, whom Rose called her "angels." And since Sin Rostro is so fond of disguises, is it outside the realm of possibility that this isn't really Luisa at all, but one — or perhaps several — of these women posing as Rafael's sister? While it doesn't clarify what Bobby is doing in Rafael's apartment or what Rose wants with Mateo, Anna, and Elsa, it would explain why we were introduced to these women several episodes back. If this is the case, perhaps when Bobby entered Luisa's apartment with pie back in "Chapter 83," he kidnapped her, and replaced Rafael's sister with Luisa 2.0.

So whether Luisa is in on Rose's latest scheme (if it really is Luisa at all), it's too soon to tell. But hopefully she's oblivious to the whole thing and that Dennis can prevent Bobby from causing any real damage before it's too late.