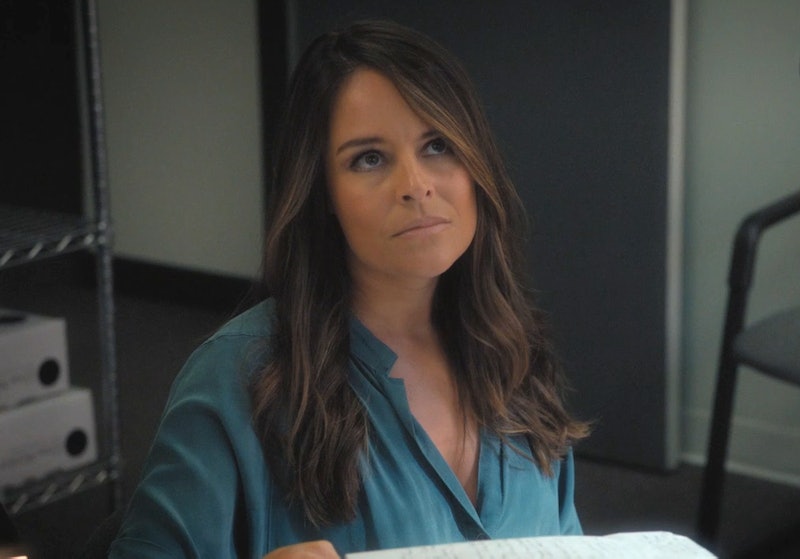 Although Sin Rostro is locked away in prison, Rose seems to always be one (or 10) steps ahead of the authorities. In "Chapter 83," Dennis asked Luisa to question Rose about a 12-digit number they had found in Michael's files. Rose's fiery response showed that the number on Jane the Virgin must be pretty significant to old Sin Rostro. And now that Michael finally has his memories back after Rose wiped them, he might actually be able to provide some insight to his former Miami police detective partner Dennis on why he had written the numbers 610232218179 in Sin Rostro's file.

As Dennis explained to Luisa in "Chapter 83," this number was buried in Michael's files and the police think it has something to do with where Rose is hiding her money. Back in Season 3, Michael uncovered a secret 12-digit bank account number (with the help of "rich guys" Rafael and Rogelio) using Mutter's Bible code. This bank account led to the revelation that Rafael had been adopted — and the identity of Rafael's birth parents remains a mystery.

But since Jane the Virgin has already done the secret bank account storyline, it doesn't seem likely the show would repeat it again. It's not completely out of the question since Jane the Virgin has repeated a number of outrageous plots before — like evil twins, unexpected pregnancies, and people returning from the dead. But Dennis surely would have figured out in the past four years since Michael's death if that number simply led to a bank account.

As for other numbers that hold importance, social security numbers are nine digits, so that doesn't work. But the number could be an international phone number. The international code for Australia is 61 and according to the Australian government website, Australian phone numbers are eight digits and preceded by a two-digit area code. The area code for Sydney is 02, so this could be a number of someone in Australia's biggest city — although, the Australian government website did note you would remove the zero of the area code when calling internationally.

Again, a phone number seems too easy since Dennis could have simply called it by now. So this must be a code or password to something else — especially based on Rose's reaction. Rose was upset that was Luisa was working with the police and told her as fake flames surrounded her, "Tell them there's no chance in hell, they'll ever figure out what that number is."

Another option is that the number isn't as significant as the show is making it seem. Rose could have reacted so strongly to seeing the digits because she was just upset that her longtime love Luisa was betraying her by working with the police. But Sin Rostro is clearly up to something in prison since she was able to video chat with her "angels" — including Bobby, who is now posing as Luisa's neighbor.

Michael had spent the beginning of Season 5 more concerned with coming to terms with his dual Jason/Michael identity. But now that Michael has his memories back and is staying in Miami, he might get back to the Sin Rostro investigation. Because while she might already be in jail, Michael absolutely has the motivation and intel to uncover whatever else Rose is up. So his return could be what puts an end to Sin Rostro's reign of terror once and for all.