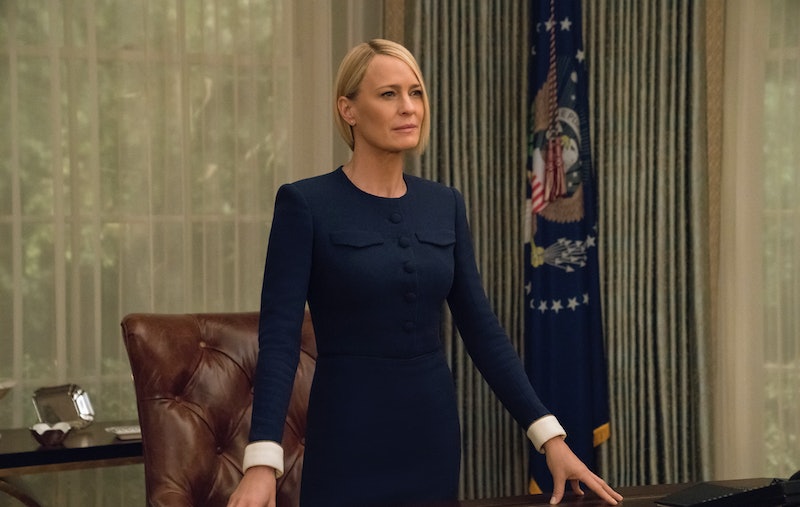 Claire Underwood is a flawed, terrifying, powerful woman who finds herself situated in House of Cards’ fictional White House, and in true character, she’s got an Oval Office to drive that point home. There are “lady quotes” on Claire’s office rug, as Annette Shepherd calls them, and they have a real significance behind them, though the show doesn’t tell us exactly what they say.

“I like your lady quotes,” Annette tells Claire as she walks into the Oval. “What is woman? “What is woman? A de Beauvoir question,” Patricia Clarkson’s character, Jane, replies, invoking the name of author Simone de Beauvoir. Claire confirms that the writer’s famous book is one she knows well. “That’s right — The Second Sex. Remember that class, Annette? How strange it was as a teenager to be taught feminism by a man in French.”

Jane says she hated the book — found it long-winded, though it’s not without its merits. “But you gotta admit, she was right about everything.” The show doesn’t give viewers all the details about the quotes found on the rug, but some of the quotes found within The Second Sex could certainly apply to the experience of powerful women, especially those who have made their way to the White House.

De Beauvoir began to write the book in 1945, according to The Guardian — it asserts that characteristics and stereotypes of gender are “imposed” on people by society, the outlet continues, and critiques the ways in which men and women struggle against one another. As outlined by Goodreads, The Second Sex offers plenty of scathing, hard-hitting, iconic quotes that Claire would totally have on her rug.

“Representation of the world, like the world itself, is the work of men; they describe it from their own point of view, which they confuse with absolute truth,” one quote reads. “No one is more arrogant toward women, more aggressive or scornful, than the man who is anxious about his virility,” reads another. Brutal, right?

And it’s not just Frank Underwood-esque men that the quotes hearken back to. “Women’s mutual understanding comes from the fact that they identify themselves with each other; but for the same reason each is against the others,” another says. That’s quite a message when put against the backdrop of Annette, Jane, and Claire in the room together — all powerful women who are inherently opposed to one another, even though they all understand what it’s like to exist in a male dominated world.

Perhaps later in the season, House of Cards will give us more insight into what specific words are found on the rug. But just the discussion of The Second Sex is an important one. Up until now, Claire has found herself constantly taking a backseat to her husband — expected to follow Frank’s lead even though she was capable of so much if she were ever able to escape his shadow. He’s now no longer alive, and still causing problems for her, so it’s no wonder that as she walks into the Oval Office each day, she’d like a reminder of who’s really in charge these days.

Though this kind of supposed feminism exuded by Claire might have viewers cheering her on, it’s almost its own kind of sinister, given what we know about her character. She’s the kind of anti-hero you’re simultaneously enamored with and terrified by. She’s no beacon of morality — not by a long shot. Between her own crimes and her knowledge of Frank’s, she’s a foreboding figure — no matter how badass she might seem or what quotes are on her rug. But that just makes her character’s future all the more intriguing and complex.