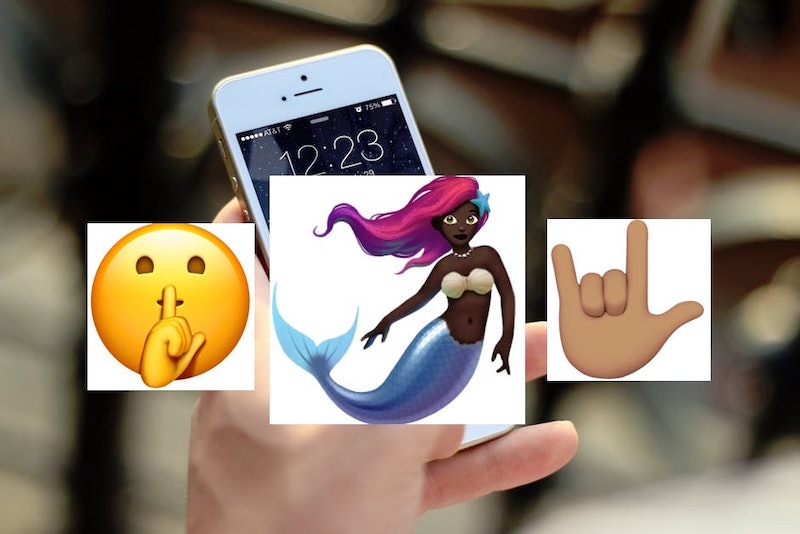 Last month we got a whole slew of new words added to Merriam-Webster's dictionary, from sriracha to "Internet Of Things" to (unfortunately) alt-right. Additions like this are necessary because the lexicon is constantly changing, and perhaps never quite as fast as it has in this Year Of Our Raging Dumpster Fire 2017. Fortunately, there are now even more ways to express your rollercoaster of emotions now, thanks to the new emoji on the Apple iOS 11.1 update. I think we can all agree that sometimes an emoji can paint a thousand words, and frankly, at this point, we all need a bit of a typing break.

Thankfully, that typing break comes in the form of dozens of emoji that are heading to our unsuspecting keyboards and into the eye lines of our soon to be very confused Baby Boomer parents. The emoji addition is part of Unicode 10, which previously added 56 emoji to the lineup; this new update will bring 30, and mostly revolves around food, expressions, activities, and (woot!) even a gender-neutral emoji.

Apple already previewed some of the upcoming emoji on World Emoji Day in July, giving us plenty of reasons to get jazzed, including an emoji woman with a headscarf, a breastfeeding emoji, and, naturally, zombies. This latest preview of the upcoming update is all the more exciting, though, because we're a heck of a lot closer to actually being able to use them. According to The Verge, these new emoji will be available to test in beta on iOS 11.1 as early as next week; Apple has not yet set a solid release date on when it will be available to the public at large, but considering the hullabaloo surrounding the new emoji reveal, I imagine it will be sometime within the next month.

In the meantime, you can start drafting all your upcoming texts and tweets by taking a peek at the new emoji Apple let everyone preview. In addition to the ones already announced in July, here's what you can expect to see in the update:

Apple is introducing a non-binary emoji in different ages and skin tones, taking even further strides in making sure that everyone is represented by an appropriate emoji and acknowledging the cultural shift toward more acceptance and understanding of people who don't fit into the original heteronormative emoji mold.

Among the new animal emoji are a dinosaur, a giraffe, a zebra, a hedgehog, and what appears to be a cricket (but, as The Verge points out, could also be a grasshopper). Looks like your infamous Land Before Time group chat is about to get 70 percent more lit.

Now you can ~express~ yourself when you go curling, rock climbing, sledding, or — everyone's fave winter activity — laying around in your towel after you shower, staring at the wall, and wondering where you're going in life!!

Now you can compose your favorite fairy tales in emoji form. Also, sorry not sorry in advance for using the mermaid emoji in all situations, with no context, so often that people wax poetic about the woman I once was before I liberally abused my emoji mermaid powers.

Listen, I don't know who petitioned for the broccoli emoji, but just know that I'm judging and that I think our resources as a society could be put to MUCH better use. That being said, Apple has made it up to us with the addition of a pie emoji and a Chinese takeout box emoji as well.

You can get your #fashion on with the addition of new clothes emoji, which include a hat, gloves, a scarf, and a trench coat, which I imagine will come in handy for all your Instagram sleuthing.

Yo, I have no idea what it means if your crush sends you this, so y'all are on your own for this one.

Your friend the Smiley Face Emoji has a lot of emotions to process in 2017, which appears to have led to it becoming a detective, going slightly bonkers, shooshing you (I know it's shushing, but doesn't it look like shooshing?), and cussing up a storm. All in a day's work.

This emoji is a visual representation of the American Sign Language hand sign for "I love you"; now we just need an emoji of Han Solo doing that face he makes when he says "I know."