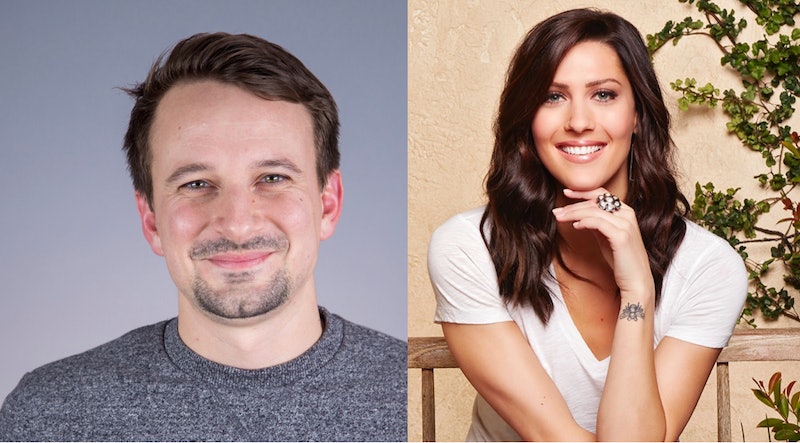 Bachelor in Paradise Season 3 star Evan Bass knows Bachelor franchise love. (He married Carly Waddell after meeting her in Paradise and they have a daughter together.) Now, read what Evan wants to say to Becca's Bachelorette contestants.

So you’ve just spent a week (or seven) filming one of the longest running and most popular reality shows of all time. You got sponsors to send you clothes (hopefully, because that many rose ceremony suits would be $$$), you put your best foot forward out of the limo, you really started having feelings for Becca, and you even found someone to run the produce section of your grocery store while you were gone (#JusticeForGroceryJoe). But, alas, you didn’t make it all the way. Maybe, like Joe, you were prematurely ejected on the first night, or maybe you made it to the Top 2 only to leave broken-hearted. But, either way, you made your debut on Monday's premiere and now you're going to be subjected to all that people seeing you on national TV can bring.

Like you probably do, I felt anxious when my time in the spotlight came during JoJo's Bachelorette season. I somehow, and for no apparent reason, made it to the Top 10 — so I had some reservations about how my time on the show would pan out for viewers. I jumped in a hot tub on a date when I clearly shouldn’t have (which was never shown), I said some pretty stupid things in the men-to-men chats (never shown), I was unnecessarily neurotic (always shown), and I was also a little silly to believe that I would find love with a very popular Bachelorette.

I had many sleepless nights thinking about how the show would portray me. I definitely made some mistakes, but I had some cool moments too (like catching a 40 yard pass from Jordan Rogers on an NFL field). So, my good men of Becca's season, how can you handle the onslaught of viewers and blood thirsty tweeters? Don’t you fear, for I am about to tell you the keys to dealing with life after The Bachelorette.

Lesson #1: Embrace The Love And The Hate

You will have fans, you will get DMs, you will have invitations of sex offered at every bar you go into (seriously), but I don’t care how much adoration is thrown your way — you will always have the detractors telling you how awful your hair or your shoes are. Or they will latch on to something you said and twist it to make it sound awful. They will take one silly little glance or remark out of context and then use that as a hot poker to jab at you. And regardless of how wrong they might be — it’s going to hurt.

So you have two options — completely stay off social media (lame) or embrace the love and the hate. Unfortunately, you can't have it both ways. It’s either all or nothing. If you read any comments whatsoever, you will be subject to both sides. But, if you’re brave enough to face the blistering storm of hate, you will find something exceptional on the other side. There are very few places on the planet where you can get such blunt and honest feedback as going on reality TV. Yeah, maybe how it looks on TV and how people are reacting online doesn't fit how you really said something or remember it, but you can use social media to your advantage in the long run — regardless of how “bad” you may come off.

After JoJo's season, for a while I laid in bed and read the nasty tweets. Sure there were four or five nice ones while The Bachelorette was airing, but there were hundreds (felt like millions) of negative ones. I even had the pseudo-Godfather of The Bachelor and perennial Nice Guy, Sean Lowe, throwing shade at me.

So I hid low and googled PR companies to help me, because I just didn’t feel strong enough to weather the troll storm on my own. I never ended up using them, but it's safe to say I was FREAKING.

Then one day, I realized that every single person I met in real life said they loved me. I got constant praise wherever I went. On Twitter I was a pariah, but in real life I was a beautiful unicorn (or something). I did weather the storm — and here's how I made it out on the other side. Contestants, take note.

Make Fun Of Yourself

I decided to start having fun with the haters. I would retweet them and then say that yes, I was in fact delusional (which I can be) that yes, I loved starting drama (which I do really enjoy). I soon realized that people loved that sh*t!

When you accept your flaws it completely takes the power away from the Internet trolls. They have NOTHING ON YOU if you agree with them. And, in fact, it shows that you have a higher level of intelligence then them because they are the ones throwing darts behind a computer — and you’re the one with the strength to go on a TV show and try something cool and new with your life.

Hang Out With Your Friends

There may be options to do events or fun things with other Bachelor people, and you should totally do those. But, remember the people in your life that were there before. They loved you not because you went on a silly show, but because they know the real you.

Despite popular sentiment, Bachelor friendships are rarely more than synthetic opportunist moments where all you talk about is the freaking Bachelor. (Notable exceptions: me and Wells/Derek and Carly and Jade/Kaitlyn).

Make A Desperate Plea For Paradise

You know who to talk to. If you didn’t like how you felt about yourself on The Bachelor or Bachelorette, beg for a second chance on Paradise. Even if the producers rebuff you, there's always the year after. People reappear on these shows all the time. And, if they do say yes, learn your lessons and try to do better. And, for crying out loud, be humble.

Get Off Your Freaking Phone

No matter how far you made it, either as a night one castoff or Top 4 contender, you just had one of the most impactful experiences of your life without ever touching a screen. The immediate response for many people leaving the show is to jump back online, post a lot, gain more followers, and find advertisers — but I would highly recommend leaning into your newfound ability to exist without dependence on your phone.

I remember each show I went on there would be a period in time where I would have “phantom phone syndrome.” I would literally feel my phone vibrate in my pocket or see the sunlight reflect off my phone next to me but it wasn’t even there. Withdrawal is a real thing when it comes to phones. Don’t let the addiction back in so easily.

Remember, This Is All Temporary

There’s another batch of guys and gals coming right after you who will take your place in the minds of viewers and tweeters. So, no matter how tough it gets, the pain will fade, people will recognize you less, and you’ll just have a really cool life experience you can impress people with at cocktail parties for the rest of your life.

So, relax, breathe it in, make fun of yourself, chill with your friends, and know that maybe, just maybe, you’ll eventually find the love of your life (perhaps in Paradise) and make a beautiful baby like me :)

More like this
Bachelorette Gabby Kissed Her New Fiancé On 'Dancing With The Stars'
By Jake Viswanath
Here's Exactly When Rachel & Tino's Fight Happened After 'The Bachelorette'
By Grace Wehniainen
Clayton & Susie Broke Up, Citing "A Significant Amount Of Pain" After 'The Bachelor'
By Jordyn Tilchen
Erich Addressed His Text Message Scandal & Twitter Is Divided
By Kadin Burnett
Get Even More From Bustle — Sign Up For The Newsletter