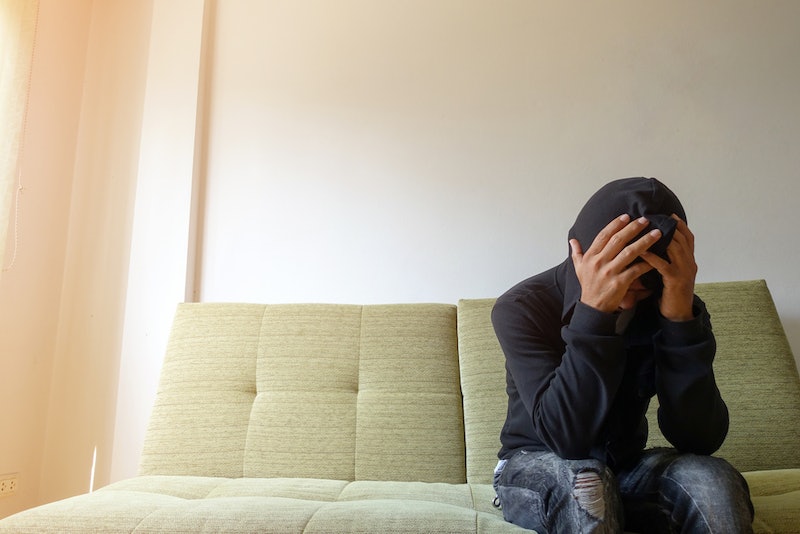 Ah, blue balls, an elusive term many believe is a myth devised by men to give a medical reason for why they should orgasm. Yet, when they throw around the term to try and win some pity, we can't help but remind them that we've also felt sexually frustrated before, and that yes, they will in fact live. And while I will make fun of a guy who uses the age-old excuse, I can't help but secretly wonder, do blue balls actually exist? What is this fabled phenomenon, does it happen all the time, and what do blue balls feel like?

Well, turns out science says that blue balls is 100 percent real. According to the University of California, Santa Barbara, epididymal hypertension (better known as the old blue testicles) results when blood flow from arousal is trapped within the genitals. When a man becomes excited and ready to do the deed, arteries that carry blood to his privates will enlarge, while veins carrying blood away from his bits will restrict, allowing the blood to remain in the area and cause an erection. The testicles will also enlarge to 25-50 percent their normal size, all getting ready for the big moment. But, if that moment never happens, the blood that has been pooling in the genitals doesn't return to normal circulation. What often results is that the now deoxygenated blood will leave a blueish hue in the, you guessed it, ball region, causing feelings of discomfort and intense pressure.

But some say men aren't unique in this area. In fact, a term was devised for the female equivalent of blue balls known as “pink balls,” because we experience a similar frustration related to blood not flowing out of our vagina when we don't orgasm. But because we tend to be the superior sex, we deal with it with dignity, and grace.

So now that you know that this seemingly exaggerated condition exists, I've decided to ask a few guys on all ends of the sexual spectrum exactly what it feels like to have your junk become discolored and angry with the world. Spoiler alert: I still don't feel bad for you, guys.

“So basically I hadn't gotten any in a while AND I was on vacation in France. I was sharing a bed with a friend and there were also two other people in the room so there really wasn't much time in the room or alone to relieve myself. It was really just a dull pain, nothing intense, but pretty constant. I had enough of it so I went out to a bar and found a guy to go home with so that I could orgasm and get rid of the pressure.”

“It feels like there's a lot of pressure built up down there and something's backed up, which makes it sore.”

“It's like having to sneeze but you can't. That feeling of just general disappointment and frustration, together with a tense, heavy and painful sensation. In the balls area. For some people it's so bad that it hampers their ability to walk. With me, it's just annoying as hell and gets me angry until I can find a way to relieve myself.”

“The blue balls come from the blood that engorged everything down there, and it loses oxygen and can give an appearance of a bluish tinge. But I find it more appropriate to relate the color with how sad the situation really is. It makes you feel blue.”

I see what you did there, Sam.

“There's no such thing. It's a ploy we uses so that women will feel bad about not having sex with us.”

What a strange combination of profoundly disturbing and oddly poetic.

“The only time I ever experienced blue balls was when me and this girl I was seeing got really drunk, and she fell asleep in the middle of foreplay. I just remember letting her sleep, but walking around my friend's house the rest of the night like I just got off of a horse I was riding through miles of rough terrain. My friends knew right away, and started calling me Sheriff Blue Balls. I think the ridicule was more frustrating than the actual feeling of it.”