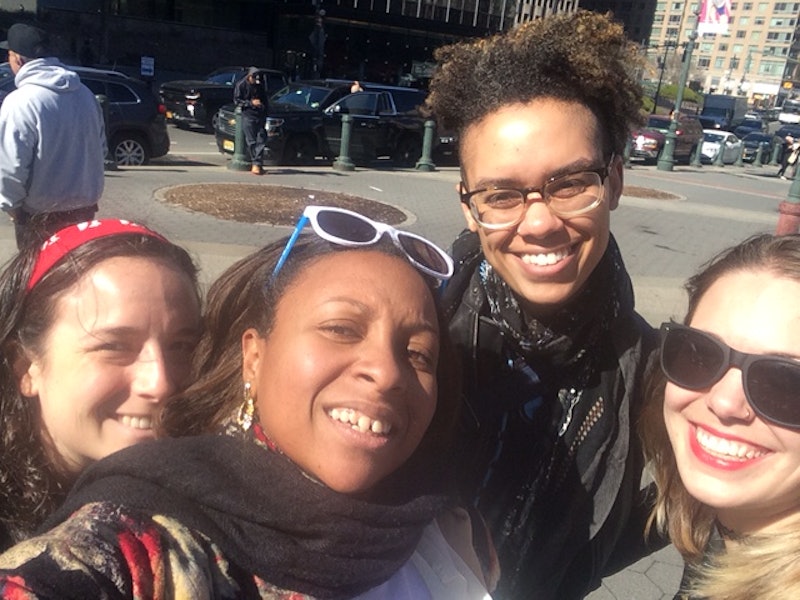 Yesterday, in solidarity with women striking and rallying all over the world, Bustle and our sister site Romper went dark for A Day Without A Woman. For 24 hours, Bustle was silent on all platforms, not posting any content to the website or any of our social media handles. Employees were given the day off and encouraged to use A Day Without A Woman in the way that would be most productive to them, and were especially encouraged to recognize the privilege of being able to take the day off by helping women who could not, whether through volunteering, rallying, protesting, encouraging others to donate, or engaging in self-care.

So on March 8, Bustle employees spread far and wide across New York City, Washington, D.C., Los Angeles, and other cities, supporting women and causes that were near and dear to their hearts. In fact, in one serendipitous moment, several groups of Bustlers ran smack into each other at the first rally of the day in just south of Central Park — and as we shared photos to social media, many of us realized that even when we didn't run into each other, other Bustlers were never far away. Here is some insight into what Bustlers did on A Day Without A Woman.

"Along with other Bustle employees, I did outreach with Voices of Women about domestic violence signs and support information before heading to the Washington Square Park Rally."

"I'm really lucky that my employer gave us a paid volunteer day off, and I felt that, as a white woman who is more economically equal than many, it was important for me to lift up or give back to marginalized communities. I spent the morning volunteering for a domestic violence organization in Manhattan, and then donated to my local Planned Parenthood. The rest of the day I used for self-care, because #TreatYoSelf sometimes just means resting and preparing for the next fight."

"I spent the afternoon volunteering at the She's the First headquarters, helping out the team with brainstorming and other tasks. She's the First is a non-profit that provides scholarships to girls, so they can become the first in their families to graduate high school. I left feeling so inspired by the work they do, and it was a perfect way to spend the day."

"The night before A Day Without A Woman, I had the privilege of attending Chimamanda Ngozi Adichie's book launch for her new feminist manifesto, Dear Ijeawele. Her feminism is everything I want my own to be: intersectional, inclusive, pragmatic, relatable. At one point in the conversation, she said something I'll never forget: "The ultimate goal of feminism is to make itself redundant." That blew me away — to hear it put so simply and accurately. We're marching so women in the future — our daughters, our granddaughters — don't have to.

We're marching so women now — those who aren't privileged enough to take the day off work — don't have to.Having the day off work was an enormous blessing — thanks, Bustle! — and I knew I needed to step up for the women who didn't have that opportunity. I donated to Planned Parenthood and head out to the streets with my sign — inspired by Chimamanda, naturally — to make some noise for women's rights. Some people will argue that protests don't matter. But anyone who has marched know that they do — they very, very much matter. Human rights issues need to remain visible. Politicians need to know we're angry. Marginalized women need to know they're supported. But the work doesn't stop after the protest. I'm using the momentum and inspiration of the women I marched with yesterday to keep fighting in every way I know how for the next four years."

"I spent the morning as a volunteer cat lady at my local animal shelter. Several badass women — shoutout to my new hero Stephanie — taught me how to play with, feed, and pet the cats to keep them healthy and make them feel safe and cared for. Sure, I sustained some battle scars at the claws of Nova and Leo, but this cozy misfit in my lap is Simba and we're totally best friends now. So, you know, worth it."

"It was very important to me to work and not participate in A Day Without A Woman. As passionately as I feel about feminism, A Day Without A Woman was done in solidarity with the International Women's Strike, which has a platform that called for the "decolonization of Palestine" and cast opposition to Israel as part of feminism. One of the organizers, Rasmea Odeh, is also a convicted terrorist. Seeing these aspects of the strike alienated me. Reading through the platform, I realized there were a number of stances a feminist may not necessarily agree with, such as in regards to unions or environmental issues. These are important issues, but mandating that a feminist can only be part of a movement if she supports all of these views may push some people out of the community. I am very grateful my office supported my decision not to join it and respected why I was not a part of the strike."

"For A Day Without A Woman, I met up with other Bustle employees to make signs and attend the rallies taking place at Central Park around Trump Tower, as well as the later one in Washington Square Park. I already donate to Planned Parenthood and the ACLU, but in celebration of the day I made an extra donation on their sites. After the evening rally, I headed over to Brooklyn to support another Bustle employee who was giving a humorous (but incredibly informative and poignant) talk in a series of lectures about the patriarchy. I also flipped off Trump Tower more times than I usually do in a given day for self-care."

"The night before A Day Without Women, my friends and I got together to collect donations for WIN. During the time, we also wrote interview tips for women entering the workforce and thank you notes to all the women who have inspired and encouraged us in our lives. It feel great to be surrounded by positive, amazing women, and got me ready to fight the following day.

On A Day Without Women, me and a few of my co-workers volunteered with Voices Of Women — an organization that advocates for victims and survivors of domestic abuse. As someone who was in an emotionally abused in college, this was an especially meaningful cause to me. The work I did yesterday inspired me to do more work with VOW going forward."

"For A Day Without A Woman, my coworker Mary and I gave a talk at ManhattanJS about our collaborations HelloGoobi and Hot Mess Studio!"

"I attended the Women’s March organizer’s gathering in Midtown with a few other editors. It was so moving to hear the words of the wonderful speakers and to feel the energy standing in those crowds — by the time we started marching on to the Trump hotel was so pumped up with the energy of badass feminists that when we ran into more of our coworkers I practically tackled them. I was so excited to see all of the women who inspire me in the office every day continue to inspire me out at the strikes."

"I started the day off by attending a women's strike rally on 59th Street near Central Park, and then later took the protest party down to Washington Square Park along with hundreds (thousands?) of other women standing in solidarity with one another and with those who couldn't take the day off to strike. It was an exciting day, but it was also a really powerful reminder that we need to act every.single.day. to make sure women of all backgrounds have a platform to make their voices heard."

“I spent yesterday attending the two biggest protests in NYC supporting the women’s strike: One outside of Trump International Hotel on Central Park West, and one in Washington Square Park. It was a beautiful experience, one that I’ll absolutely never forget in my life — it was so inspiring to march with such powerful, brilliant women alongside me, and a great reminder that we will ALWAYS be louder than they are."

"My colleague Lia and I spent the morning volunteering at the Food Bank in West Harlem, stocking shelves and helping families in need fill out their grocery lists."

"During the Women's Strike, I volunteered at the New York City Food Bank in West Harlem. I spent the day with a lot of really powerful women who are complete bosses at their jobs, along with other women (dressed in red, of course) volunteering for the day. I learned a lot during my day there (like, I'm now a pro at dismembering turkeys whether I want to be or not) and I was very humbled while serving supper to those that came to the Food Bank for their meal. I can't wait to return (and put my newly-developed turkey skills to the test)."

For more ways to participate and help elevate the voices of women everywhere, check out Bustle's list of actionables for Women's History Month and beyond here.

More like this
Charlene White & MPs Lead Tributes For Bristol Bus Boycott Organiser Roy Hackett
By Sam Ramsden
25 Things I've Reduced My Life To, In Addition To WFH In My PJs
By Ginny Hogan
The Spiritual Meaning Of The August 2022 New Moon
By Nina Kahn
How To Change Your Twitter Handle
By Emma Carey
Get Even More From Bustle — Sign Up For The Newsletter