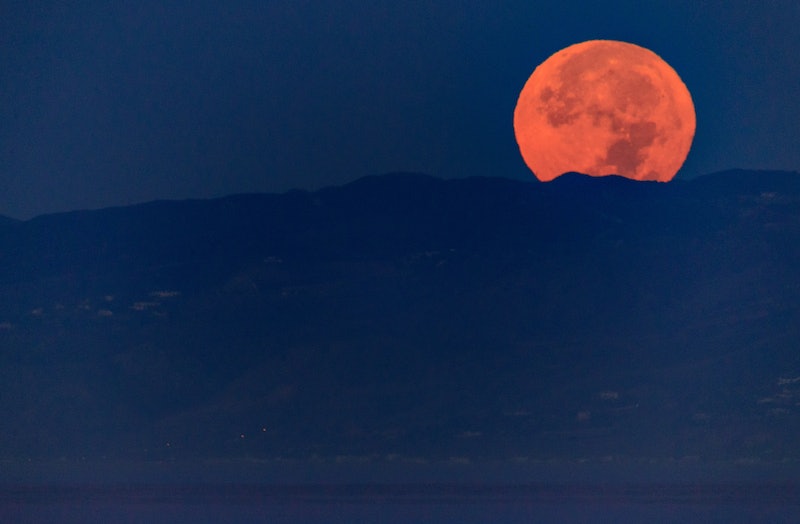 Get your binoculars ready, because it's time to look up in awe at the moon one more time this month. That's right, there's another supermoon headed our way in Jan. 2018 — and it's not just a supermoon, it's a super blue blood moon. (I dare you to say that 10 times fast.) With a title like that, including the terms "blue" and "blood," you might be wondering what color the super blue blood moon is going to be — after all, Jan. 31 will be the first time one has occurred in over 150 years, so it's not like any of us have witnessed one more. Will it be super blue? Will it have that slightly reddish, "blood" tint? Lucky for us, science has the answers.

According to Space.com, a "super blue blood moon" is basically what happens when a "supermoon," a total lunar eclipse (also known as a "blood moon"), and a "blue moon" all occur at the same time in one night. Three for the price of one! What a bargain.

So we're all on the same page: A supermoon happens when a full moon occurs while the moon is closest to Earth in its orbit, according to Space.com. "Supermoons make the moon appear a little brighter and closer than normal, although the difference is hard to spot with the naked eye." Then, a blue moon occurs when the moon is full for a second time in a calendar month (in the case of Jan. 31's moon, it's the second full moon in January following the full moon on Jan. 1, 2018). And, lastly, a blood moon is the word thats used to describe the full moon during a total lunar eclipse; it's called this because, due to the sun's reflection on the moon, the full moon appears to take on a slightly reddish tint, according to Timeanddate.com.

So, now that we know what it is, you're probably left wondering if what color the super blue blood moon will be? Will it be blue? Will it be red? Is it possible that the moon might appear purple?

While this moon may be dubbed a "super blue blood moon," you'll be surprised to know that the color of the moon is anything but blue. According to Space.com, "the moon will take on its characteristic blood-red color as it enters totality," due to the total lunar eclipse that makes it a blood moon.

"The moon will lose its brightness and take on an eerie, fainter-than-normal glow from the scant sunlight that makes its way through Earth’s atmosphere," NASA said of the super blue blood moon. "Often cast in a reddish hue because of the way the atmosphere bends the light, totally eclipsed moons are sometimes called ‘blood moons," NASA continued.

Additionally, “the supermoons are a great opportunity for people to start looking at the moon, not just that once but every chance they have!” Noah Petro, a research scientist from NASA’s Goddard Space Flight Center said in a statement. “The lunar eclipse on Jan. 31 will be visible during moonset. Folks in the Eastern United States, where the eclipse will be partial, will have to get up in the morning to see it,” Petro said. “But it’s another great chance to watch the moon.”

The best time to see the supermoon is as the moon rises or sets, which happens to be when the perspective of the horizon shows you how much bigger it is according to Space.com. So, make sure to set your alarm to get up early, and head outside to check out the moon — considering it'll feature a trifecta of lunar events, it's not one to miss.