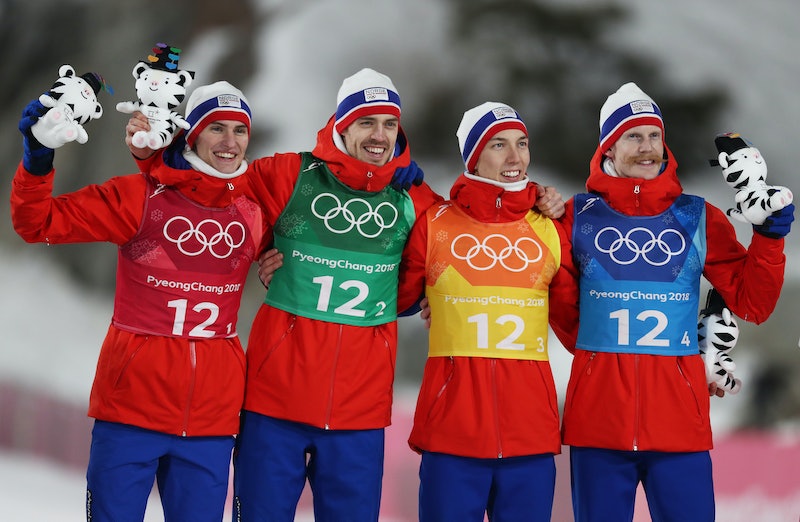 There's no denying that winning an Olympic medal is a really big deal. Competing at the Olympics is pretty much the moment that every athlete spends years training for — and winning a medal is proof that their hard work paid off, because they actually won a competition against the best of the best. It must be an incomparable feeling. But, what about when the Olympic games end and an Olympian brings their medal home? What do Olympians do with their medals after the games? I mean, it seems kind of strange to think they'd just hang it up on their wall like many of us did with sports trophies and medals we earned in high school, but hey, to each their own.

Turns out, the choices vary by athlete. For instance, if you're Michael Phelps, you keep your medals in a makeup bag wrapped in a t-shirt. At least, that's what he was doing back in 2012, according to an interview he did with Anderson Cooper. Now, with 23 gold medals, he's probably had to invest in a bigger bag, and t-shirt for that matter.

Olympian Christie Rampone takes a slightly different approach: In 2008, the American Olympic soccer player told the Tampa Bay Times that she kept her assortment of gold and silver medals among her pots and pans, because she believed it was the last place anyone would look.

2018 Winter Olympic champions have already come up with their fair share of spots for their medals. NBC reported some of the 2018 Winter Olympians' plans for their medals: For instance, American skier Mikaela Shiffrin apparently keeps her medals in the most classic of hiding places, her sock drawer. Veronika Vitkova, a runner from the Czech Republic, has opted to keep her medal even closer, sleeping with it under her pillow.

Before they're awarded to an athlete, Olympic medals actually aren't worth a large amount — a gold medal is valued at approximately $564, a silver medal is worth about $305, and a bronze medal is composed primarily of copper which makes it's value too insignificant — but afterwards, their value skyrockets. Case-in-point: Ukranian boxer Wladimir Klitschko was able to sell his 1996 gold medal for a total of one million dollars, which he then donated to a children's charity that he and his brother had previously founded. Similarly, American swimmer Anthony Ervin sold his medal from the 2000 games to raise money for victims of the 2004 Indian Ocean tsunami. After putting the medal up on eBay, he donated the $17,101 made to the cause.

While Klitschko and Ervin chose to sell their medals, some Olympians may have no other choice but to. Time reports that two members of the 1980 "Miracle on Ice" hockey team have sold their gold medals: Mark Wells sold his medal in 2002 when he had to pay for back surgery, and his teammate Mark Pavelich did the same in order to support his family.

While the Olympics might give the illusion of a glamorous life for the athletes competing in it, many are just getting by. For some, selling their medals can make a big difference for their funds — especially after their career as an Olympian is over. After all, most Olympians make the big bucks after the games through endorsement deals.

Winning an Olympic medal is a major achievement, and deciding what to do with the prize is a personal decision with no right or wrong answer. We'll have to wait and see what the winners of the 2018 Winter Olympics do with their gold medals. Until then I'll be keeping my fake medal with my pots and pans.