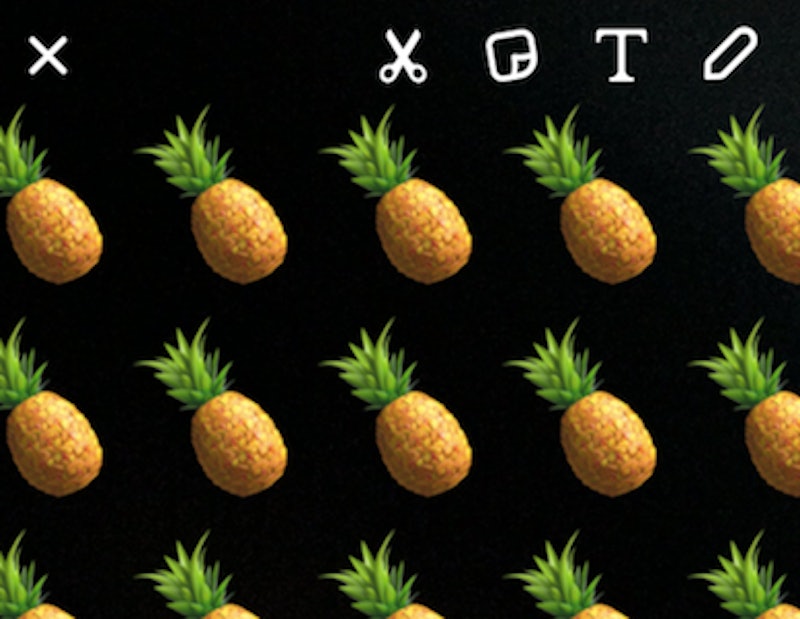 When it comes to love, relationships, and fruit emojis, a few probably immediately come to mind (*ahem* peach emoji). But if you've been wondering why people are posting pineapples to Snapchat stories, you're not alone — anyone who hasn't been clued in by more knowledgeable teenage girls is probably asking the same thing. It's weird, but it will all make sense in a minute, I promise.

The posting-random-fruits-on-Snapchat trend seems to have started right after Christmas, when a bunch of ~youths~ decided it would be fun to create a secret girls-only code that mysteriously alludes to their relationship statuses while confusing boys... and pretty much anyone else who isn't up to date on Gen Z antics. Once you know what the rules are, though, the Snapchat fruit game becomes pretty easy to figure out. People post a certain fruit that corresponds with a different relationship status. Blueberry means you're single. Cherries mean you're in a relationship. But, if your love life isn't quite so straightforward, you have another option: pineapple means it's complicated.

Once upon a time, you could simply update your Facebook relationship status to "it's complicated" when you wanted to let people know you were neither single nor dating anyone seriously, but that's just way too much to the point, especially when you can post a bunch of pineapple emojis to your Snapchat story to get people scratching their heads instead.

There are other fruit options too, by the way, if you feel like neither a blueberry, cherry, or pineapple. As Wojdylo Social Media first pointed out, there's a great deal to choose from inside the fruit bowl if you're looking for a way to describe your love life. A lemon means you want to be single, and raspberry means you don't want to commit. It doesn't stop there, either. In what looks to be a Snapchat screenshot that's going viral, you get a full look at what all the different possible fruit mean:

My personal favorite is avocado, which apparently stands for "I'm the better half," but for the sake of full transparency, I gotta admit I'm definitely a pineapple. Not that I have any desire to post that myself to Snapchat — I'm pretty sure the majority of my Snapchat contacts either would have no idea what I was talking about, or if they did they wouldn't super care that I was announcing it to the world this way. As it turns out, though, even people who ARE up to speed on the fruit lingo are kind of over the whole thing.

Only time will tell how long this Snapchat trend sticks around, and what will replace it once it's gone. According to Reddit, people have already started moving past fruit to post emojis of animals that correspond to their relationship statuses (FWIW, panda means you're single). Weird, but do you.

More like this
Here’s What TikTok's "Mascara” Trend Is *Really* About
By El Hunt
Ashamed Of Your Screen Time Stats? Here's How To Change That
By Alexis Morillo
Learning To Love, Not Judge, The Lunchbox Wives Of TikTok
By Esther Zuckerman
How To Turn Off TikTok Profile Views So You Can Stalk Other Accounts In Secret
By Alexis Morillo
Get Even More From Bustle — Sign Up For The Newsletter
From hair trends to relationship advice, our daily newsletter has everything you need to sound like a person who’s on TikTok, even if you aren’t.