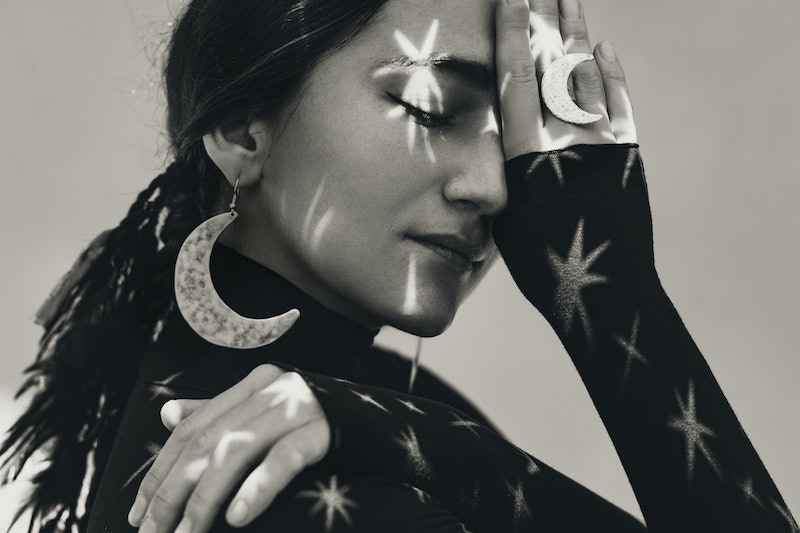 Yes, we're coming up on the July 2019 new moon, but no, you're not having déjà vu: This is indeed the second new moon that's taken place during July 2019 — making it a month that has both kicked off and will end under the shadow of a new moon. We had a new moon in Cancer at the very beginning of the month on Jul. 2, which asked all zodiac signs submit to some sensitive eclipse energy and allow it to show us our path. And now, we're wrapping things up with yet another new moon this month on Jul. 31 (which also happens to be the same day that Mercury goes direct after its headache-inducing July retrograde, so yay). But what does it mean to have two new moons in a month?

Unlike July's earlier new moon in Cancer, the Jul. 31 new moon rises in the dramatic and ever-passionate sign of Leo. It's offering us some fresh-start energy, an auspicious chance to integrate some of the recent astrological lessons learned, and a fertile patch of soil in which you can plant some energetic seeds when it comes to creative passion projects — and its energy is even stronger due to the fact that it's both a super moon and a black moon.

You've probably heard the term "once in a blue moon" to refer to something that doesn't happen very often, and that isn't just a random idiom: It's actually based on astrology. A "blue moon" is what we call the phenomenon of two full moons taking place within a single month. Conversely, when we have two new moons taking place in a single month, we call it a "black moon." And just like blue moons only take place once in a while, black moons are pretty uncommon too: According to Farmer's Almanac, black moons only take place every two to three years.

The energy of a new moon is typically ideal for starting new projects, committing to new paths, and otherwise adding new things to your life — and July's black moon is no exception. Bustle spoke with astrologer Lisa Stardust about what to expect upon July 2019's black moon rising. "This luminary occurs when there are two New Moons in a month," explains Stardust. "We are able to press refresh and restart. We will only see the dark side of the Moon, hence the name Black Moon, lending potent energy to beginnings and growth." Now's the time to dream and allow your intuition to lead.

And the energy is potent indeed. New moons denote the beginning of a new 29.5 day lunar cycle. But having two of these new beginnings take place within a single calendar month signifies the start of an even larger, more influential lunar cycle — and the energy you put forth now can have an influence over your life during many months to come. "Considerably more potent than your 'average' new moon, this cycle is a defining one in terms of our future direction and the change it augurs in our lives," wrote astrologer Sarah Varcas on her site. "Each black moon signals the beginning of a new cycle which lasts until the next black moon, two and a half to three years later, so these are powerful moments in time which can markedly influence the coming years. It is therefore wise to use their energy well!" Use it, don't lose it, y'all.

The July 2019 black moon is also going to be a great time to embrace your inner (or outer) witch and get out your spiritual toolkit. "Black Moons create a very potent energy for spell work," Stardust advises. Do whatever it takes to clear the clutter from your mind and allow your intuition to hop into the driver's seat — perhaps for you, making that space involves meditation, journaling, or physical movement. Then plan a ritual to honor the energy of the black moon and commit to a new path and the integration of the lessons learned through this summer's astrological rollercoaster.

It's believed that our actions under the energy of a black moon are even more fated and powerful, so we'll want to be very intentional about what we are working to manifest. "If we are thirsty for change in our life, eager to discard old and tired ways to make room for new life, a black moon is our unfailing ally, providing the impetus and focus to embrace and bring about effective and long-lasting change," continued Varcas on Astro Awakenings. It's a rare and special cosmic opportunity to start anew and really embrace our dreams, so we'll all want to take advantage of it.