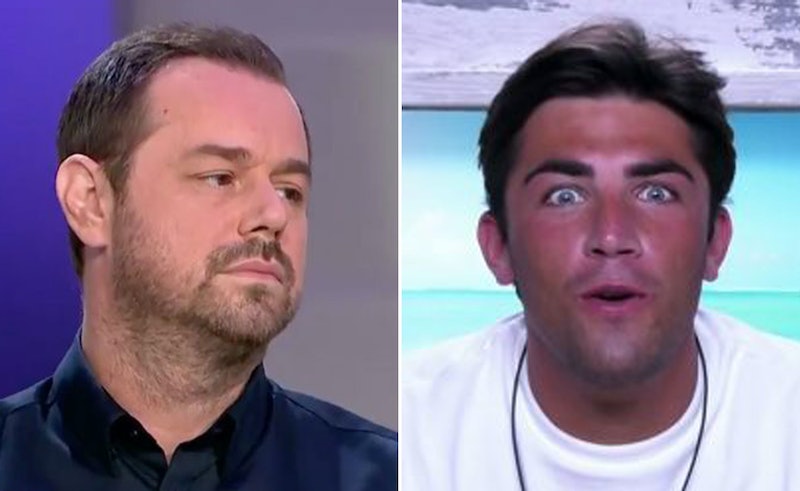 It's probably fair to say Jack Fincham has behaved like the perfect gentleman while courting his now official girlfriend Dani Dyer over the course of this year's Love Island. Nonetheless, it looks like he may have fallen at the final hurdle when it comes to winning over his possible future father-in-law Danny Dyer. "What is she taking about?" I heat you ask. Well, it was a blink and you'll miss it moment. But put it this way, I dread to question what does Danny Dyer think of Jack now.

Not sure what I'm talking about? Well, just cast your mind back to Sunday night's episode of Love Island. Remember when the female islanders got to leave the villa for the afternoon after winning a luxurious spa day? Yeah, that episode. Now, you may recall the lads embarking on a strange form of bantering in what appeared to be a bizarre attempt to make the time go faster. This involved the use of some extremely dodgy Northern accents and an improvised script that would get any self-respecting soap writer sacked faster than you can say "I've got a text".

I mean seriously, it was beyond cringe. Check out the clip here:

But what does any of this have to do with Danny Dyer, and whether or not he likes his daughter's new boyfriend, Jack?

Well, following the decimation of the aforementioned "banter", Jack happened to inform his fellow male islanders that it had left him "just [wanting] to watch Coronation Street." Of course, Dani's dad and and meme legend Danny Dyer currently plays the role of Queen Vic landlord Mick Carter on Coronation Street's rival soap, Eastenders — and Love Island fans don't think Danny will be too impressed with Jack seemingly confirming his preference for the Manchester-set soap.

Below are just a few of their reactions:

So, has Jack scuppered his chances of winning Danny over?

Well, things seemed a lot more promising for the pair last week when Danny decided to make a joke out of the fact that Jack has a picture of him on his bedroom wall. Well, technically, it's of a canvas of a movie poster he was on, but still. Luckily, Danny saw the funny side and poked fun at his "future son-in-law". He tweeted: "Right...I’m off to the villa...to sign my future son in laws canvas....lovely."

Whether or not the Coronation Street incident will have an affect on Danny's opinion of Jack from here on out is yet to be determined, but did the actor really like Jack before his major verbal slip-up anyway? According to his wife — and Dani's mother — Joanna Mas, Danny very much did so.

Speaking on This Morning last month, Mas told presenters Philip Schofield and Holly Willoughby that both she and her husband Danny approved of Jack. Mas said: "I think [Dani] made the right connection. The first time I saw [Jack] on the television, I thought, 'he really is Dani's type because he is so funny and so warm'. She does like him. I know she does."

Mas then went on to insist that despite the memes doing the rounds on Twitter, her hubby very much is a fan of Jack as well. She added: "Danny really likes Jack. I think Danny when he does meet Jack — big Danny — he'll probably cry, like ‘You’ve took my child away from me’. He's really possessive. Or, he could be making out he's this big hard man, just sitting there."

So, does Danny still like Jack after the Corrie slip-up? Something tells me it won't be long until Love Island viewers find out...