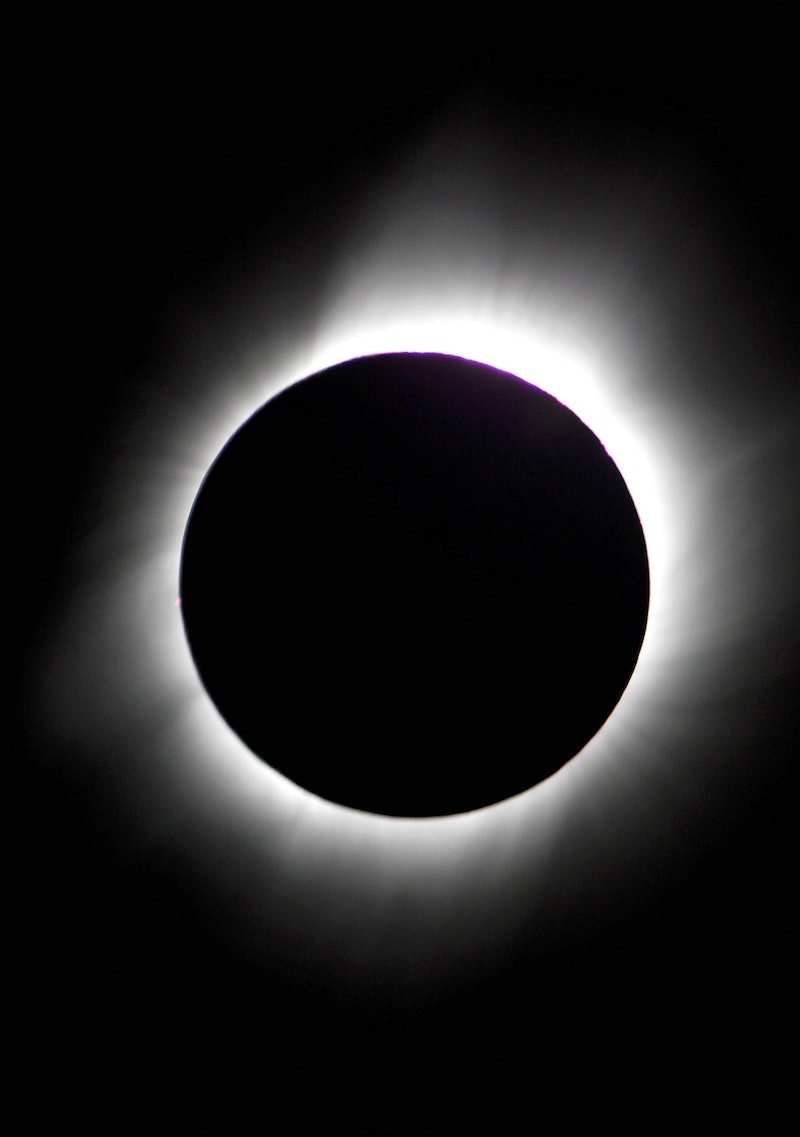 Let’s start by breaking down what each event means individually. According to astrologer Susan Miller, eclipses often function as “wild cards”; writing at Astrology Zone, she describes them as follows:

They are some of the most dramatic tools that the universe uses to get us to pay attention to areas in our life that need to change. They uproot us, surprise us, and get us moving. They shake us out of our feelings of compliancy [sic] so that we can move from one level of maturity to another, to a higher plane, and they work very rapidly. Eclipses want us to change, and change we do!

She notes that eclipses also often mean you’ll be hearing news about major life events, that they often mark beginnings and endings, and that you might encounter a random event you hadn’t anticipated. According to Miller, “The job of an eclipse is to shine a glaring ray of truth to the part of your life that is being touched, and truth will likely arrive in a startling way.”

Mercury retrograde, meanwhile, is well-known for being a disruptor. From a science standpoint, the planet isn’t actually moving backward; it’s basically an optical illusion. When a planet turns retrograde, it refers to a “perceived reversal in the standard west-to-east movement” of that planet through the stars, according to Taylor Kubota at Live Science. Kubota explains:

Put more plainly, pretend you're Earth, watching Mercury runaround a track. As it runs its loop, it will start out moving from the left side of your field of vision to your right. Then, it rounds the corner and, although not moving backward, is now running from right to left. This analogy is oversimplified because it doesn't take into account the fact that Earth is also moving, but it gives a good idea of how this optical illusion plays out.

All planets turn retrograde at various points, although how it happens — and how often it happens — varies from planet to planet.

Astrologically speaking, during retrograde periods, the things normally ruled by each planet tend to get turned on their heads. As Bustle’s Brandi Neal put it, “Because Mercury is the ruler of communication, coding, shipping, and travel, many of things related to these areas can go awry when the planet is retrograde, causing frustration for humans in most aspects of their daily lives.” Or, put another way, Café Astrology describes Mercury as “the planet of day-to-day expression and communication” — so, when it's retrograde, you might find a lot of misunderstandings and mis-communications occurring in your everyday life. It is, however, an excellent time for stepping back and taking stock of just about everything in your life: According to Astrology Answers, “Mercury retrogrades are suitable for all the ‘re′ words: rethinking, reflecting, revising, and redoing. Don′t start anything new, but revisit existing plans and make sure they hold water.”

The good news is that the overlap between eclipse season and Mercury retrograde is brief. Mercury turned retrograde on Aug. 12 and will station direct on Sept. 5; meanwhile, the total solar eclipse is scheduled to happen on Aug. 21, after which there will be no more eclipses in 2017. According to Time and Date, the next eclipse — a total lunar one — won’t occur until Jan. 31, 2018. You’ll still want to brace yourself for another Mercury retrograde, though; the fourth and final one of 2017 is set to occur between Dec. 3 and Dec. 23.

We’re not out of the woods yet!