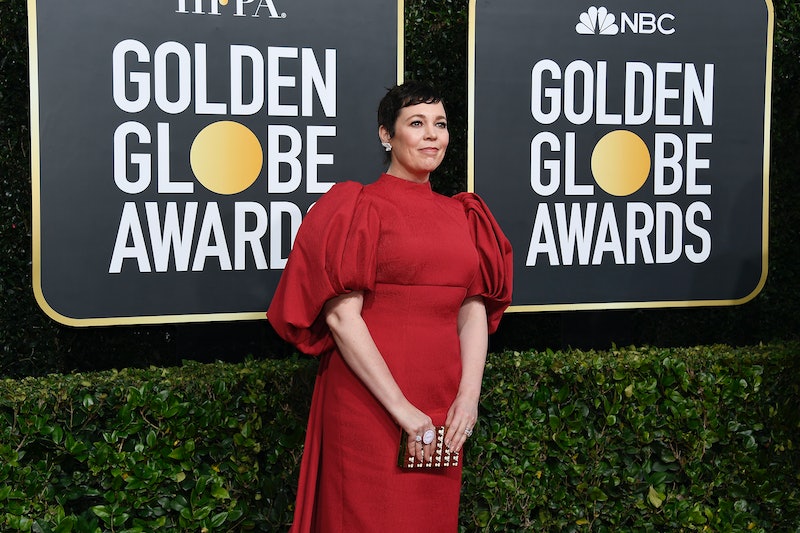 Olivia Colman is the Queen. As in, she plays the Queen on The Crown, and the Hollywood Foriegn Press seems perfectly impressed with her performance as she went home with a statue at Sunday night's awards. The actor didn't just take the opportunity to snag a statue though — Olivia Colman's 2020 Golden Globes ring also sent a message as she accepted her award.

On the red carpet, Colman was part of the major puffy sleeve trend. Her high-neck red gown with a column silhouette featured large, voluminous sleeves and a simple train, and those sartorial details may have made it easy to miss a markedly smaller part of her look: a round ring on her middle finger.

In photos from the Golden Globes red carpet, Olivia Colman's ring can be seen more clearly. It's a circular piece, the size of a cocktail ring, with two 50s in the center and Equal Representation For Actresses written along the outer rim of the jewelry.

According to The Hollywood Reporter, Colman's ring is an emblem for ERA5050, a UK-based campaign working to promote gender parity in British television and film by this year. According to the campaign website, the organization connects high-profile actors and leading industry members to the cause, and they, in turn, promote the campaign via badges (like Colman's ring), while those behind the organization lobby government for meaningful policy change.

Colman, however, wasn't alone in wearing the badge. On the red carpet at the 2020 Golden Globes, The Crown co-star Tobias Menzies joined her in wearing the piece, and it's also been seen on previous red carpets.

According to ERA5050's website, both Emma Watson and Colman's fellow The Crown star Claire Foy wore the badges to the 2018 Golden Globe Awards. In 2017, Fleabag star and writer and Killing Eve showrunner Phoebe Waller-Bridge wore the badge in a ring just like Colman's to the 2017 BAFTAs.

Although there were fewer shows of support for organizations like ERA5050 at the 2020 Golden Globes, there were multiple calls for donations to help firefighters and citizens in Australia battling the brush fires engulfing the country. Winner Russell Crowe even sent a message with his acceptance speech, in which he called for help for the country.

While the 2020 award season has seen less visible shows of activism via fashion than in the past, the celebrity attendees are still strong voices for the things they care about — Colman included.

More like this
Olivia Rodrigo’s Grammys After-Party Dress Was Sequined Perfection
By Alyssa Lapid
Lauren London’s Best Outfits From Netflix’s You People
By Alyssa Lapid
Kendall Jenner’s Colored Tights Prove That Cheugy Can Be Chic
By Alyssa Lapid
Megan Fox & Machine Gun Kelly Are A Masterclass In Emo Couple Dressing
By Avery Matera and Allie Fasanella
Get Even More From Bustle — Sign Up For The Newsletter
From hair trends to relationship advice, our daily newsletter has everything you need to sound like a person who’s on TikTok, even if you aren’t.