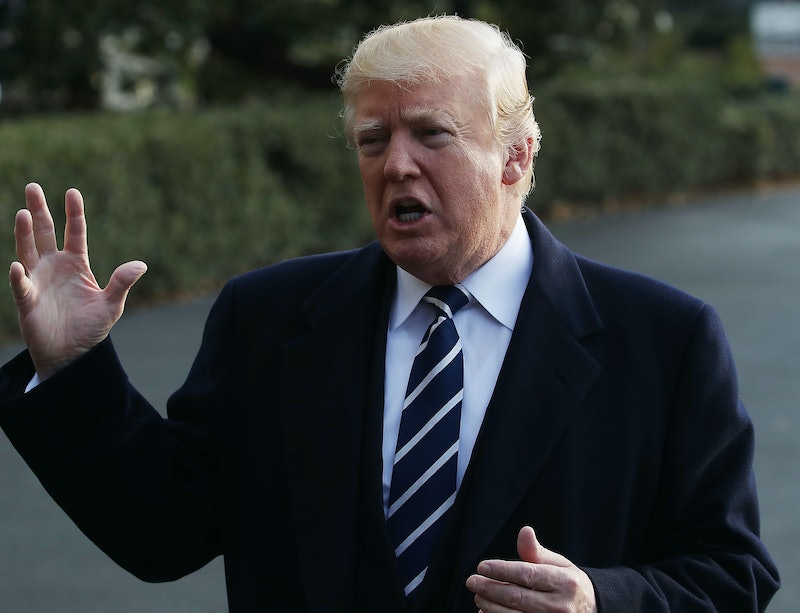 The full moon is rising on Dec. 3 for the last time this year, and its position in the stars means a whole lot more than just a pretty view out your window. December's full moon is the first and only official supermoon of 2017 — and on top of that, this lunar event is coinciding with Mercury going into retrograde. I know, that's a lot to deal with. The combination of the two could lead to a lot of added stress that will last for a while. Since the full moon is in Gemini, people with this zodiac sign might feel things a little more intensely. Quick reminder: President Donald Trump is a Gemini, and considering how deeply his administration was affected by the Solar Eclipse earlier in 2017, it's worth paying attention to how other astrological happenings could affect his administration. What does this full moon mean for Trump? You might not personally care about his horoscope (trust me, I don't either), but this full moon could actually signal another huge downfall in his presidency. And considering this full moon also coincides with Mercury retrograde, and is also a supermoon... yikes!

A full moon is said to have some seriously strange side effects. One major effect is that the full moon can make you more sleepy, something that I'm pretty sure we're gonna see in him in the coming weeks. Another effect that is often talked about is that the full moon can make people act a little crazier than normal, participating in behaviors they normally wouldn't. If Trump says or does something out of character (which, let's be honest, is a little hard to point out since his behavior is often erratic), the supermoon could be a contributing factor.

Don't forget about Mercury retrograde! Mercury rules communication, so this time is often full of mishaps and miscommunication. Mercury also rules Gemini, which means that communication issues could intensify for this zodiac sign. This could mean that Trump might have difficulty communicating his thoughts, he might find it harder to understand others, and there could an increased chance of disputes around him. Again, this isn't exactly abnormal for Trump, so really, this is a major negative for the rest of us. If you already struggle to understand what Trump is trying to say, expect that to be even worse during the time of the full moon. He himself might have trouble understanding what others tell him, and considering his position of power, that's definitely not ideal.

Gemini is a sign of duality, and this Gemini full moon can make Trump, and other Geminis, feel extra curious. Tarot says, "Repeating past stories or forgetting significant details is pretty much guaranteed now, but the distraction ratio is off the charts so it's easy to overlook mistakes." Trump might find himself feeling oddly nostalgic, but he'll also find himself prone to forgetting important things and feeling more distracted than usual. None of that seems great! Let's hope we can get through the full moon without needing Trump to make a big decision.

Speaking of which, this isn't the best time for Trump to jump into anything new. Not only will he be feeling extra distracted due to the full moon and Mercury retrograde, but he also won't be in the right state of mind to really consider consequences (again, this doesn't feel particularly new for our president). He also might be a little extra chatty than usual. Broadly says, "Full moons are a time of release and are highly emotional occasions. You will find that you are really spilling your feelings during this time. You won’t be able to hold them in anymore." If you're hoping Trump will accidentally spill some important details from the Flynn investigation — who knows? It's a possibility during this full moon. My recommendation: Watch him closely. This full moon could be the catalyst to revealing a lot about him and his administration.

There is certainly a lot going on, which will make you feel relieved that the full moon effects only last for about a day. Basically, Trump is probably going to experience intense emotions, some periods of reflection, and a whole lot of distraction. As for whether or not the full moon will cause any sort of downfall in his presidency... well, that remains to be seen. Additionally, this probably won't all end once the supermoon is gone — Mercury retrograde will extend some of these weird side effects until Dec. 22.