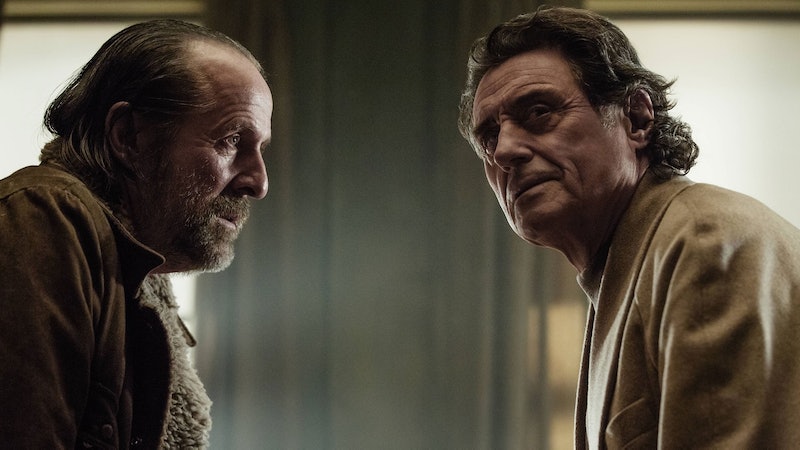 Netflix
By Caitlin Gallagher
May 7, 2017

If you're a fan of Game of Thrones, then you know that some characters in Westeros pray to the old gods and the new. While that's just one theme of the HBO show, this idea of old and new gods is the entire premise of Starz's American Gods. And for the second episode of the bonkers series, the new old god that will be introduced on American Gods is Czernobog. Ian McShane's Mr. Wednesday (oh, hey! he was on Game of Thrones once) and Ricky Whittle's Shadow Moon head to Chicago in "The Secret of Spoons" to try to recruit Czernobog and he's a worthy adversary for Mr. Wednesday. So which god is Czernobog inspired by? This dark god has ancient roots.

Although there aren't a lot of official websites about the history of Czernobog, he is based on mythology. Known also as Chernobog, Chernabog, and Tchernobog — with the most common version of his name being Chernobog — Czernobog is a Slavic deity whose name means "Black God." (Slavic can pertain to the cultures of Belarus, Bulgaria, Czech Republic, Poland, Serbia, Croatia, Slovenia, Russia, and Ukraine.) So, as his name indicates, he's not really known for being a good guy. As he represents darkness and evil, he is the opposite of his brother Belobog — the "White God." And this "God of Evil" certainly looks frightening enough as he wields a bloody sledgehammer.

In its article, "The Gods of Slavic Mythology," the website Ancient Code explained that Chernobog and Belobog fought over control of the seasons and that:

"Chernobog was associated with bleak attributes such as cold, famine, poverty, and illness. Despite this, he is still respected among all the other gods. During the creation of the world, some say these two brothers came into conflict, and their polarising actions created the cycles of the universe (night and day, summer and winter, and the motion of the stars). Chernobog rules over the dark half of the year, opposed by Belobog who presides over the brighter half."

American Gods won't actually be the first time this evil and satan-like god, who pretty much embodies all the bad things in the wold, has appeared on screen — actually, it's far from it. Besides the Neil Gaiman book that the Starz series is based on, his most memorable appearance is Disney's interpretation of him — Chernabog — in Fantasia. He's the evil, winged demon who has the ability to raise spirits from the dead in the "Night on Bald Mountain" sequence.

In 2015, The Hollywood Reporter wrote that this Fantasia feature would be getting its own live-action film, which means that Chernabog would be prominently featured in it. The film is still in development, but Chernabog appeared in other Disney media as the villain in the video game Kingdom Hearts and a bad guy in Season 4 of Once Upon a Time.

American Gods will give Czernobog a more human body than Disney did since he is portrayed by Swedish actor Peter Stormare. Considering that Stormare portrayed Gaear Grimsrud, alongside Steve Buscemi's Carl Showalter, in the movie Fargo, he has proven that even though he's not a winged demon, he's still fully capable of giving people nightmares. So he'll nail the whole dark god thing on American Gods.

As American Gods described him, Czernobog is a "Slavic god of darkness and evil," who is "reluctant to join the coming war, wary of Mr. Wednesday's motivations." But that won't stop Mr. Wednesday from trying to get this extremely malevolent god on his side during the May 7 episode.

More like this
Stephen Graham’s Wife Plays A Vital Role In His Career
By Emma Madden and Sophie McEvoy
Everything To Know About The Musical 'Joker' Sequel – & Lady Gaga’s Role
By El Hunt and Sam Ramsden
Sky’s New Princess Diana Doc Tells Her Story Like It’s Never Been Told Before
By Frances Stewart
Does 'Locke & Key’s Ending Mean There Could Be A Season 4?
By Sophia Moore
Get Even More From Bustle — Sign Up For The Newsletter