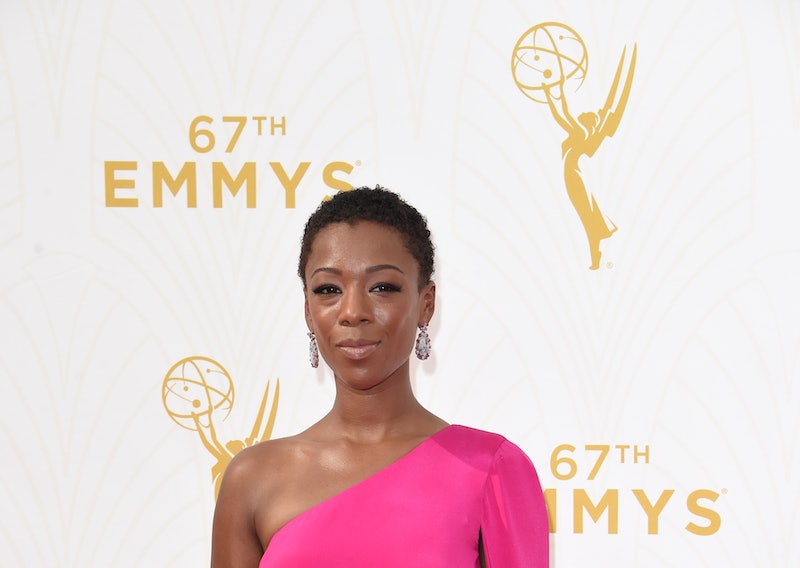 (Warning: spoilers for Orange Is The New Black Season 4 ahead.) Samira Wiley may have recently ended her run on Netflix's prison dramedy Orange Is The New Black as her character Poussey Washington was accidentally suffocated by a guard in a tragic scene that reflected the issues of police brutality and the Black Lives Matter movement. If you're still reeling from the unexpected loss of the fan-favorite character, it's understandable; but hopefully the news that the popular OITNB actress will soon be back on your TV screen will help ease the pain. As announced by The Hollywood Reporter, Samira Wiley has been cast in The Handmaid's Tale , an upcoming Hulu original series.

Adapted from the acclaimed novel by author Margaret Atwood (which was also made into a 1990 feature film starring Natasha Richardson, Faye Dunaway, and Robert Duvall), The Handmaid's Tale tells the story of a dystopian future where the United States has become the Republic of Gilead, and the few fertile women that remain — like our protagonist, Offred (Mad Men's Elisabeth Moss) — are trained and sold as "handmaids" to wealthy men to bear their children. According to THR, Wiley will play Moira, a friend of Offred's from the time before Gilead, and a fellow Handmaid-in-training. Like Wiley herself, Moira is also an out and proud lesbian, and she resists the patriarchy of the new Republic.

All in all, it's sort of a step down for Poussey, who despite being incarcerated inside Litchfield Penitentiary, had a loving family, a girlfriend, and a surprising amount of joy in her life for a convicted felon. By comparison, life in Gilead will be measurably worse for Moira and Offred— even outside the bars of a literal prison.

But it's encouraging to see that Hulu's vision of the dystopian future is going to be fairly diverse; apart from Offred's best friend being a queer woman of color, her love interest Nick will be played by British actor Max Minghella (The Social Network), who is half-Chinese. ( The Leftovers ' Ann Dowd will also play a role as Aunt Lydia, the head of the "Red Center," where Handmaids are trained before being assigned to their respective Commanders.

Hulu has yet to announce a specific premiere date for The Handmaid's Tale, but it is expected to debut sometime in 2017 as a 10-episode limited series. If that sounds like too long to wait to see Wiley back on your screen, you're in luck; this isn't the only gig the OITNB actress has lined up. First you'll be able to catch her in the techno-thriller Nerve starring Emma Roberts and Dave Franco, in theaters later this month. Then you can see Wiley in action on the third season of FX's You're The Worst , which she is joining in a recurring role as the therapist of Aya Cash's character Gretchen.

Although her time on OITNB may be over too soon, it's good to see that Wiley's career is likely just getting started.

More like this
How Much Are The 'Schitt’s Creek' Stars Worth?
By Hugh McIntyre
‘SNL’ Finally Spoofed Nicole Kidman’s Weirdly Beloved AMC Ad & Nailed It
By Stephanie Topacio Long
Jonathan Bailey’s BTS ‘Bridgerton’ Photos Celebrate 6 Months Of “Kanthony”
By Stephanie Topacio Long
Nicola Coughlan Addresses 'Bridgerton' Season 3 Backlash
By Sam Ramsden
Get Even More From Bustle — Sign Up For The Newsletter