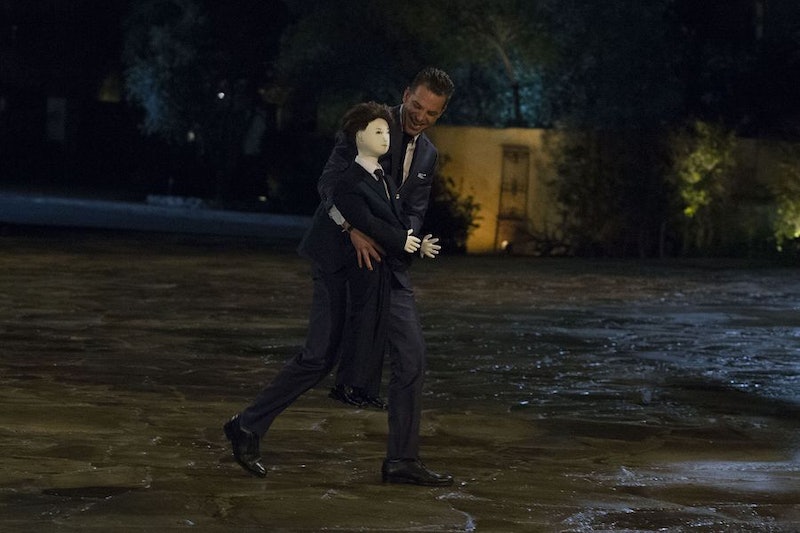 Weird limo arrivals are par for the course when it comes to The Bachelorette, but there are some fans just never forget, and that definitely applies to a certain doll we all know. When Adam introduced himself to Rachel Lindsay on her season premiere, he wasn't alone — he'd brought Adam Jr., a strange and creepy doll that looked similar to him... and spoke French. But now that we've already made it to hometown dates and Rachel sent Adam home, you might be wondering what happened to Adam Jr. after The Bachelorette. Now that Adam's not on the show anymore, do they no longer have any use for him?

Don't worry — it doesn't seem like he ended up in the trash or anything. It seems that Adam's inanimate mini-me is still kicking around somewhere, living in his newfound spotlight. In fact, he even surfaced in one of Adam's recent Instagram posts, where he was posed between Adam and Bryan. Of course, the photo was taken while the show was still filming, right before the spelling bee date, but obviously, Adam Jr. hasn't left his father's mind for a minute.

And as weird as this entire gag has been, the photo is actually kind of cute. You know, if you're into French speaking dolls who are wearing baseball caps and shoes as if they were a real person.

And in case you missed it, Adam Jr. even got to make the trip to Norway with everyone and posed with Rachel after the viking games. Basically, he's living every Bachelorette fan's best life.

In fact, someone even made Adam Jr. his own Instagram account, which looks just about exactly like you'd think it would, with creepy screenshots from the show:

It's hard to say exactly where Adam Jr. will end up now that Adam's time on the show has officially come to a close, but one thing's for sure: Bachelorette fans will undoubtedly be haunted by the memories of him for years to come. Good luck, men of next season – you've got big shoes to fill.

Well, actually, they're tiny shoes, but still. Who can top that?

Here's hoping Adam keeps us updated on his companion on Twitter and Instagram. As strange as the whole stunt was, it's hard not to stay interested.