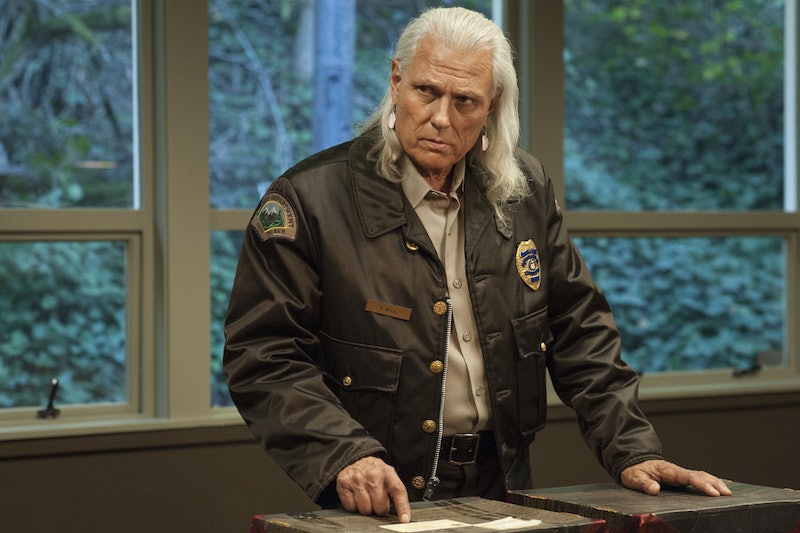 One of the more consistent narrative thread on Twin Peaks: The Return delivers some real nuggets of goodness in Part 7. Seriously, this breakthrough in the case just made Twin Peaks so much better. In the June 18 episode, Sheriff Truman and Hawk examine Laura's diary entries about Annie Blackburn, analyzing the pages for clues and piecing them together with their own information about Cooper's final days in Twin Peaks. While Annie's whereabouts are still unknown and Laura's been dead for 25 years, both she and Laura are still giving the Twin Peaks Police Department major clues in their investigation into Dale Cooper's disappearance.

The return of Laura Palmer's diary connects back to the Twin Peaks prequel film Twin Peaks: Fire Walk With Me. In the film, Annie (Norma's sister and former love interest of Dale Cooper) speaks to Laura as a disembodied voice, telling her that the good Dale Cooper is in The Black Lodge and that she should write the information down she she won't forget. It's this exact reminder, which Laura mentions came to her in a dream, that Truman and Hawk read aloud in the Twin Peaks Police Department conference room.

Hawk confirms that Laura is speaking about Dale Cooper, even though the two had never met in real life. Truman knows something's up. Hawk goes on to say that he believes these diary pages are what The Log Lady wanted him to find in order to help gain momentum on finding out what happened to Dale. He further connects that the Annie Laura is talking about is the same Annie who went into The Black Lodge.

Hawk continues to connect the events of Fire Walk With Me to this ongoing investigation, as he tells Truman that these pages match with the diary recovered from Laura's friend's home. If you've seen Fire Walk With Me, then you might recall this exact scene, where Laura discovers her diary is missing pages and goes to her friend Harold's place to tell him about it. See? It's all coming together, folks.

Truman, still clearly stumped, asks Hawk as to how these pages ended up wedged inside of a metal door in a bathroom stall. There's a tricky question. Hawk believes it might have been Leland Palmer, Laura's father, who made a few trips to the police station before disappearing. He theorizes that Leland found out Laura knew the truth about the Black Lodge spirit BOB and how he was inhabiting Leland's body, which forced Leland to hide the evidence. Hawk also connects the dots that Annie and Cooper were seen leaving The Black Lodge and returned to The Great Northern that same night but this forces Hawk to wonder: if the good Cooper was still in The Black Lodge, what version of Cooper came out of The Black Lodge?

Finally! A breakthrough in the investigation. It's good to see that there's finally some momentum from Hawk and Truman on this case, even if it's a bit annoying that viewers have known the answers to these questions for 25 years. Here's to hoping these big breaks keep coming so Hawk can finally locate the good Cooper.