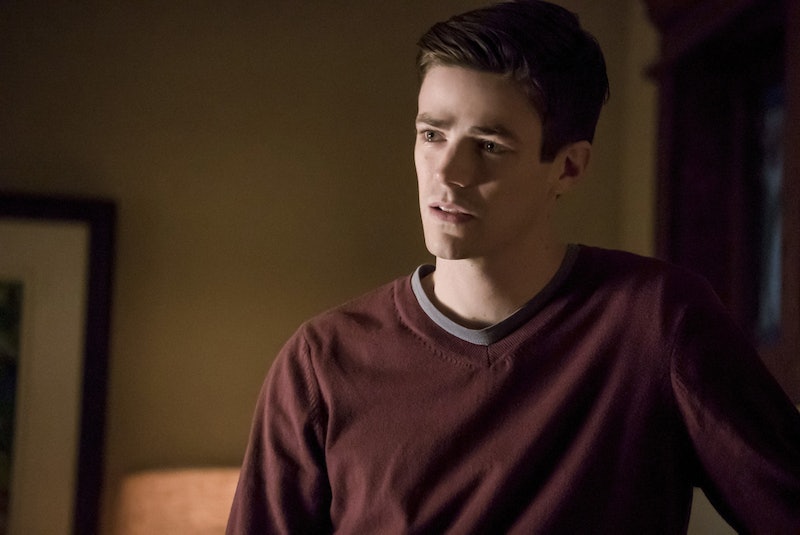 Barry Allen officially becomes a superhero in The Flash's Season 3 finale, when he sacrifices himself to save Central City (and maybe the entire planet). After defeating Savitar, saving Iris, and getting Cisco and Caitlin back from Savitar's evil grip, Barry is forced to walk into the Speed Force prison in "Finish Line." The final scene of Barry walking into the Speed Force to accept eternal imprisonment seemed pretty bleak, but is Barry dead? Will he come back in Season 4? And what does this mean for the rest of Team Flash?

The answers to most of The Flash Season 3 finale questions are unknown, but there are a few we can answer right now. First, sleep easy knowing that Barry Allen is far from dead. Both Jay Garrick and Wally have spent time in the Speed Force prison (it needs a speedster occupant at all times), and they are very much alive. Second, Barry will not be in hell, as Jay and Wally were. He walks in pretty peacefully, with the Speed Force welcoming him as his dead mother and assuring his family and friends that he will be at peace, and that it is time for him to "rest." Barry looks at it a bit differently, telling Iris, "This is my penance. This is my redemption."

So, Barry is stuck in the Speed Force, but what happens next? Well, lucky for Barry, he somehow defeats Savitar in a way that allows Wally and Caitlin to keep their powers, so Central City still has Kid Flash looking over it. And Harry comes back to STAR Labs from Earth-2, and promises Barry he'll stick around. And then there's Tracy Brand. The physicist brought on board to create Savitar's prison in the first place is, as far as we know, still open to the possibility of helping Team Flash. I'm guessing Tracy will be working overtime in Season 4 to bring Barry back.

Finally, as some eagle-eyed viewers noted on Twitter, the circumstances regarding Barry's departure from Central City — the earthquakes and red lightning caused by the Speed Force — mimic the conditions laid out in the newspaper from the future that predicted The Flash's disappearance.

Has the timeline been altered once more? And what does this mean for the future of WestAllen? Unfortunately, it looks like we'll just have to wait and see.