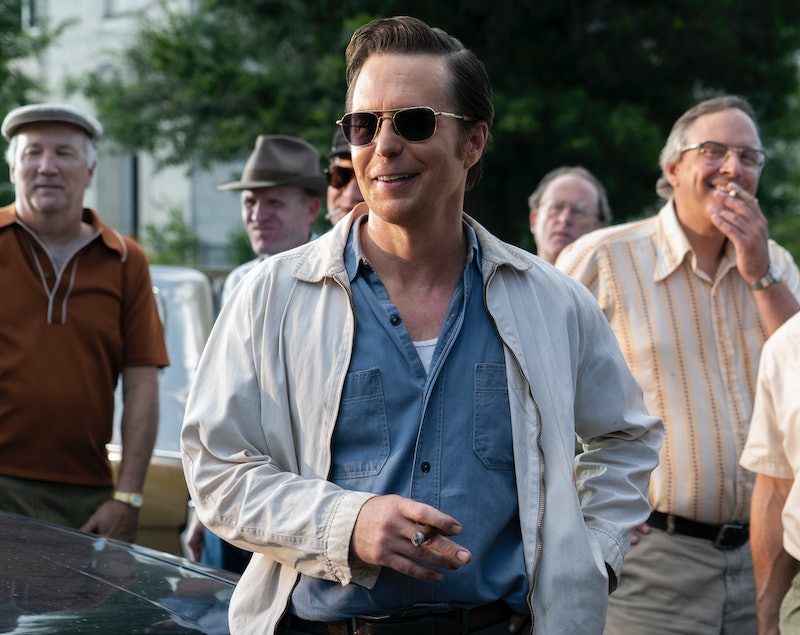 In the new movie The Best of Enemies, Taraji P. Henson and Sam Rockwell play Ann Atwater and C.P. Ellis, a real-life civil rights activist and a KKK leader, respectively. The transformative events shown in the film take place during the 1960s and '70s, but what happened to C.P. Ellis after that? As you might expect, considering an entire movie is being made about Ellis and Atwater's relationship, things really took a turn for him after their work together.

Obviously, a KKK leader and a civil rights activist would not get along, and the movie shows how after years of being at odds, the two co-chaired a 10-day community meeting, called Save Our Schools, about school desegregation in Durham, North Carolina. Integration was happening, and at the 1971 meeting Ellis and Atwater led talks about the violence that was occurring because of it. Atwater told NPR of the meeting in 2005, "[S]ome of the people in City Hall was Klansmen as well, and they had him put out there so he could disrupt everything that everybody was trying to do. He was to tear it apart." Instead, after the meeting, Ellis denounced the Klan and his position as Exalted Grand Cyclops, publicly ripped up his membership card, and set off on a new path, per his Los Angeles Times obituary.

Both Atwater and Ellis were poor, and according to The Guardian, Ellis once said, "It finally came to me that I had more in common with poor black people than I did with rich white ones." The New York Times reported that he told the Durham Herald-Sun, "I would hear black workers talking about the same problems as white workers, and I could see the common interests we shared. It helped me overcome a lot of prejudice in my life."

Ellis has explained that he blamed black people for his problems, including poverty, which was something he'd been taught by his dad. This was the reason joining the KKK appealed to him. The Guardian reported that Ellis told writer Studs Terkel in an interview, "I'll never forget the night when they put the white robe on me and the hood, and I was led down the hall and knelt before the illuminated cross. It was thrilling. Me, this poor little ol' boy, a nobody, felt like somebody."

But, through talking with Atwater, he realized that he had a lot of misplaced anger — to put it lightly. After leaving the KKK, Ellis went back to school to earn his high school diploma, according to the Los Angeles Times. He then became a union organizer, including for the International Union of Operating Engineers, which had a majority of black members. He stayed there until his retirement.

After leaving the KKK, Ellis was shunned by a lot of the white people he knew, and the LA Times reported in his obituary that he considered suicide. The Guardian notes that he suffered from alcoholism during his life.

Ellis died at the age of 78 in 2005. He remained friends with Atwater throughout his life and she spoke at his funeral. (Atwater passed away in 2016.) She told NPR about Ellis, "He stayed in touch with me; I'd call him. If I told him I needed some money, he told me he needed something, we looked after each other. We saw that each other, you know, was making it."