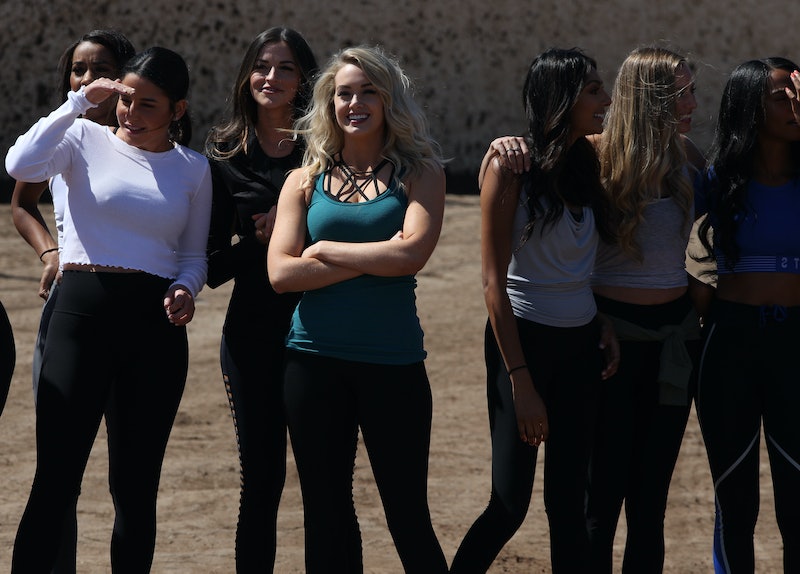 It's not unusual for Bachelor in Paradise to cast some unfamiliar faces. Usually that comes in the form of contestants who were sent home in the first couple of weeks, or even hours, of their seasons. But Jenna from Arie's Bachelor season made it all the way to Week 6. So, why can't anyone remember who she is? Sadly, what happened to Jenna on Arie's season is that she fell victim to being overshadowed by bigger personalities.

After all, Arie's season had not one but two "villains" in Chelsea and Krystal and it also had Annaliese's bumper car breakdown, Bibiana's mic drops, a Kendall and Krystal two-on-one, and all the age drama with Bekah M. Between all that, it was harder for some women to rise to the top of people's attention spans. Jenna was eliminated the same week that single mom and early villain-who-got-redeemed Chelsea and villain-all-along Krystal got sent home — so you'd be forgiven for forgetting that Jenna was also sent home that week.

But, ahead of her appearance on Bachelor in Paradise, you should get refreshed on who she is, because it sounds like she's gonna be causing trouble in Paradise. A trailer for the series shows her splashing around with Jordan and proclaiming that "it's about to get coco-nuts." Someone also says in a voiceover that "Jenna could be the thing that ignites the feud between Jordan and David," so... that doesn't bode well.

She may soon be wishing for her more forgettable days on The Bachelor when she was just doing this:

Having A Wordy Entrance

Jenna stood out most for being quite the fast talker, with People magazine's recap labeling her, " Jenna, who rambles nonsensically."

That's one way to make a first impression.

Hanging Out With Another Jen

In addition to Arie's season having four Laurens, it also had a Jenna and a Jenny. They chilled together until Jenny got sent packing Week 2.

Getting A Premiere Episode Rose

The first rose is the most important (next to the last, which Jenna definitely did not get).

Going On The Demolition Derby Date

She was overshadowed on this date by Annaliese's pure fear of cars thanks to a traumatic bumper car incident in her childhood.

Playing With Some Puppies

She joined the Week 3 group date, but again got overshadowed by Annaliese who had a fear of pups as well.

During the wilderness survival group date, Arie jokes that they'd have to drink their own pee to stay hydrated. Jenna seemed down for that.

Her team won the Week 5 bowling date. This is when Arie infamously let even the losing team hang out with him afterward, and Krystal freaked the eff out.

Jenna faded into the background on the Moulin Rouge date. And her time on the show was almost up.

Arie didn't even walk her out after eliminating her, which shows how little of a connection they made in six weeks.

Joining The Women Tell All

Jenna may not have won Arie's heart, but she stayed relevant enough on the show to score an invite to the Women Tell All and, later, Bachelor in Paradise. And from the looks of that trailer she's done blending into the background. Time for her to, in her own words, get coco-nuts.