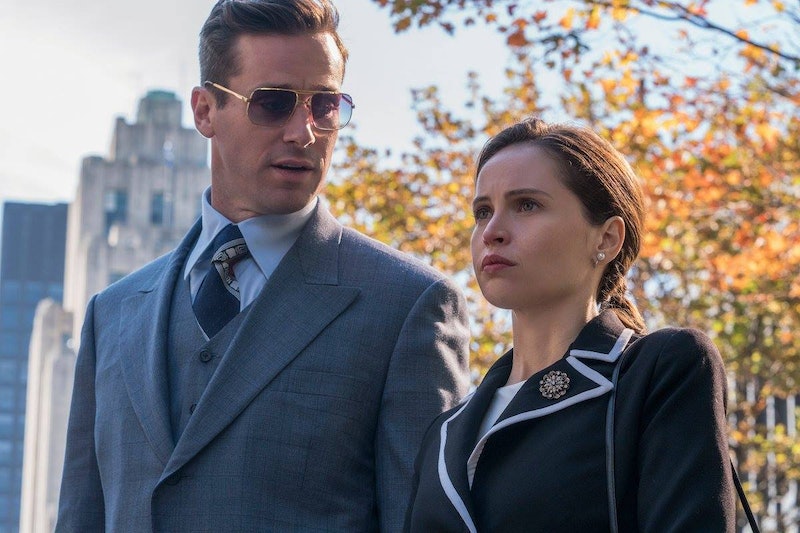 Though On the Basis of Sex tells the tale of the amazing Ruth Bader Ginsburg and her fight for women's equality, it's also a touching love story. Alongside Felicity Jones' powerhouse Ruth, Armie Hammer co-stars as Marty Ginsburg, Ruth's husband, who was a key supporter of Ruth's career aspirations. The movie shows that Marty was also a true believer in equality, and his progressive thinking on gender roles certainly helped Ruth in her battle for justice. But while Ruth Bader Ginsburg has been on the Supreme Court for 25 years, has become a pop culture sensation as the "Notorious RBG," and has had now two movies made of her life, her husband was not quite such a public figure. And since the movie focuses on just a few years of their life together, it doesn't show what happened to Marty later.

When On the Basis of Sex opens, Ruth and Marty are already married and have had their first young daughter, Jane. They had met on a blind date, and, according to The Washington Post, Ruth later said that Marty was, "the only young man I dated who cared that I had a brain." Well-matched, they attended Harvard Law School together. As is shown in the film, while both were attending law school, Marty was diagnosed with testicular cancer. While Marty underwent treatment, including radiation, Ruth attended his classes for him, taking notes, and helped him with all of his course work, in addition to caring for Jane, completing her own school requirements, and making the competitive Harvard Law Review.

The scenes in which Ruth and Marty face his diagnosis are some of the most touching of the film. Marty looking to Ruth for comfort and assurance is a lovely example of a man experiencing vulnerability and need while the woman steps up in strength. It's a dynamic that continues throughout the movie, and indeed continued throughout their lives. Ruth and Marty shared domestic duties, childcare, and their careers equally. Marty even preferred to do the cooking, as the movie shows with Hammer chopping away in the kitchen. "As a general rule," he told the New York Times in 1997, "my wife does not give me any advice about cooking, and I do not give her advice about the law. This seems to work quite well on both sides."

When Marty graduated, he was offered a position at a law firm in New York and Ruth transferred to Columbia University to finish her law degree. Throughout their lives, they continued their balanced partnership, supporting each other in their career pursuits and sharing their drive together in equality. "I have been supportive of my wife since the beginning of time, and she has been supportive of me," Marty told the New York Times in 1993. "It's not sacrifice; it's family." While Ruth taught at Rutgers, Marty became a prominent tax lawyer, taught at New York University, and Columbia's law school, Ruth's alma mater. When Ruth was appointed to the United States Court of Appeals for the District of Columbia Circuit, Marty joined the faculty at Georgetown, per his New York Times obituary. He also practiced tax law at Fried, Frank, Harris, Shriver & Jacobson, and authored a number of writings and books on tax laws,

According to Jane Sherron De Hart’s biography, Ruth Bader Ginsburg: A Life, Marty was a key player in securing Ruth's nomination to the Supreme Court, using his influence with clients to talk up her skills and qualifications. "Marty’s effort to smooth the way for his wife’s advancement was characteristic of the couple and their relationship," De Hart wrote. "No other campaign for a seat on the Court had been spearheaded by a male spouse." If Marty had not fought so hard for his wife, who knows if we'd have one of the most influential feminists on the Supreme Court today.

In 2010, just after his 56th wedding anniversary to Ruth, Marty passed at the age of 78 from complications stemming from metastatic cancer. Despite the great loss, Marty had an extensive, influential career, and he and Ruth shared a love that lasted their entire lives. "Meeting Marty was by far the most fortunate thing that ever happened to me," Ruth says of her husband in the documentary RBG. They say behind every great man there's a great woman, in Ruth and Marty's case, that, and also the opposite, were the case.