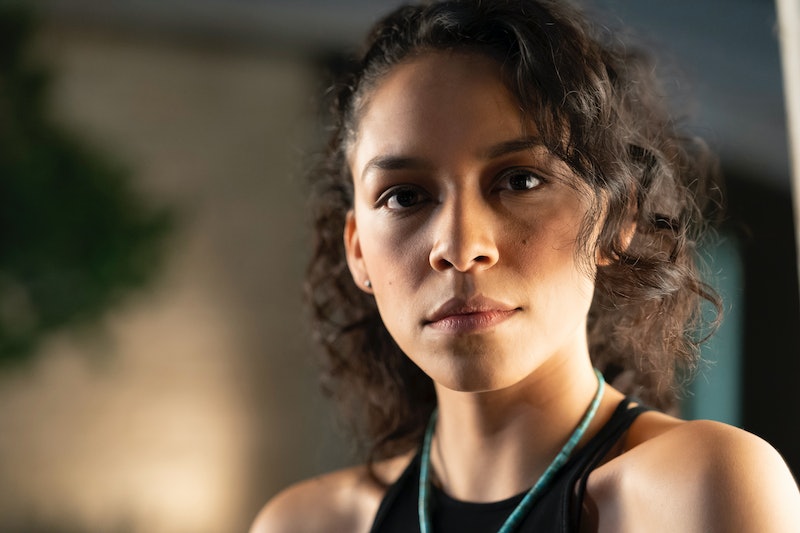 Spoilers ahead for Chambers Season 1 ahead. Netflix's new horror show, Chambers, follows one dark turn after another. It starts out with Sasha being rushed to the hospital for an emergency heart transplant, and ends in a befuddlement of cults, spirits, and death. So if you're confused about the Chambers ending, you're not alone. Let's break it down, shall we?

First of all, Sasha almost died. That's how she got in this predicament in the first place. While trying to have sex with her boyfriend for the first time, she had a heart attack, and with near miraculous timing, a girl name Becky died and was able to provide her with a heart. The lucky transplant, however, was basically cursed. Sasha is unwittingly thrust into a haunting mystery, and she becomes obsessed with uncovering Becky's secrets.

Sasha, at first, starts noticing similarities between herself and Becky that seem like fated coincidences. They may have come from different backgrounds, but they're still both teenage girls who like chips and lip gloss. However, as the story goes on — and especially as Sasha starts to see Becky's own, personal memories — the dead girl starts creeping back to the surface. She's trying to get out, deliver a message to Sasha, and stop what happened to her from happening again. Between memories of Becky's life and a series of panic attacks that make it seem like her body is rejecting the heart, Sasha becomes determined to find answers.

Becky's death was reported as an accident, but Sasha eventually finds out that she committed suicide after a "spiritual group" (read: cult) called the Annex Foundation forced some kind of evil spirit into her body. Unable to get that darkness out, Becky ended her own life. However, she and the darkness live on in Sasha.

By the end of the season, Becky has completely taken over Sasha's body, and while passed out the two girls bond in a fantasy realm that serves as a metaphor for their shared heart. Becky really, really wants Sasha to kill herself so that the darkness that the Annex put inside of her does not spread. Sasha, however, is not having it. She ultimately smothers Becky, killing her memory and allowing her to move on. After doing that, Sasha wakes up and seems to be herself again.

However, in the final scene of Season 1, Sasha learns that the Annex was trying to put Lilith — a mythological figure thought of as an evil demon — inside of her. It's unclear why, exactly, the Annex was trying to do this, aside from that they believe Becky and Sasha are special. They failed the first time with Becky, but with Sasha, their plan seems to have worked: in the final moment of the last episode, she uses what seems like supernatural powers to cause half of the group to faint. She refuses to go with them, so if Chambers returns for Season 2, clearly a fight is brewing. Whether Sasha is good or evil, we don't yet know.