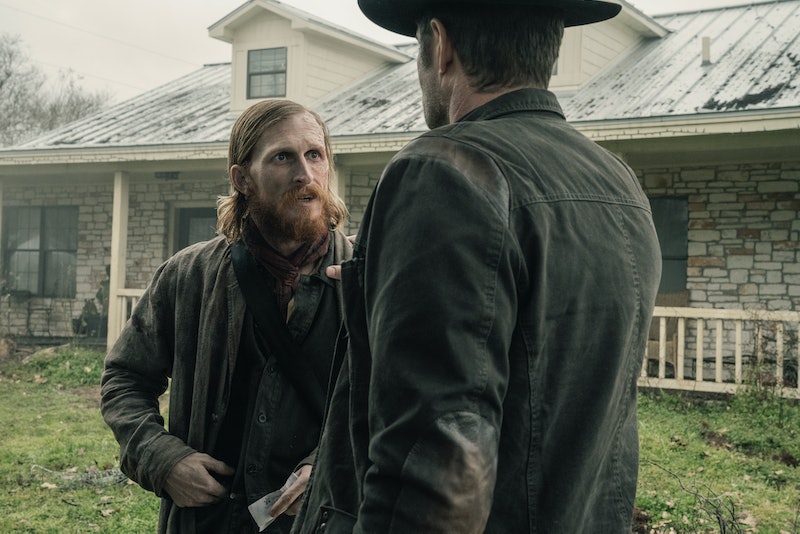 On the July 7 episode, after following a new lead, John and Dwight found a house where Sherri was presumably staying. As a romantic, John Dorie is committed to helping track her down. They figure she was at the house recently, too, by the state of the food and supplies inside. This is the closest to finding Sherri that Dwight has been since Daryl banished him from Virginia on The Walking Dead.

However, John found a letter in the car outside. It was marked with Sherri's signature infinity symbol, and inside the letter instructs Dwight to stop following her. Here's what the heartbreaking note says:

"D, I had to kill someone. A man back at that diner. He almost killed me. I know we've both seen so much. Too much. But I still don't like the thought of you looking for me in all that death. I don't want that for you, D. I don't want you to kill yourself trying to find me. I wouldn't be able to live with that. So I want you to stop looking for me if you're still looking. I know I gave you hope but now I wanna give you a chance. I'm getting out of this place and so should you. This will be my last letter. Even though this is the end of us, please don't let this be the end for you too. Find something to live for, and live. I love you forever, Honey."

What Sherri isn't considering is that she is who Dwight is living for now. Finding her is what's driving him to survive, and move on past the horrible things he's done in this apocalypse under Negan. So how is that fair that Sherri just gives up? Why is she so afraid to be found? Between this and the ill-fated romance between Althea and Isabelle, couples have not been faring well on Fear The Walking Dead. Only John and June have made it work, and even that relationship took a lot of time, work, and building trust.

It doesn't seem like Sherri found some other partner or anything like that. It's not that kind of breakup letter. However, speaking of Isabelle... what do you think the odds are that Sherri left Texas by hopping aboard a three-ringed helicopter? She says she's "getting out of this place," and there aren't really any other ways "out," so to speak. Isabelle's people are secretive to a fault, and letter like this might have been the only way to protect Dwight. If she gets him off her trail, he won't get killed if and when he learns too much.

When Dwight returns from the house, John doesn't tell him about the letter from Sherri that he found in the car. Hopefully that won't backfire, and Dwight's continued search will lead to more answers. Sherri may think she's giving Dwight a chance by leaving him behind, but everyone deserves happiness on Fear The Walking Dead — not just to merely survive.