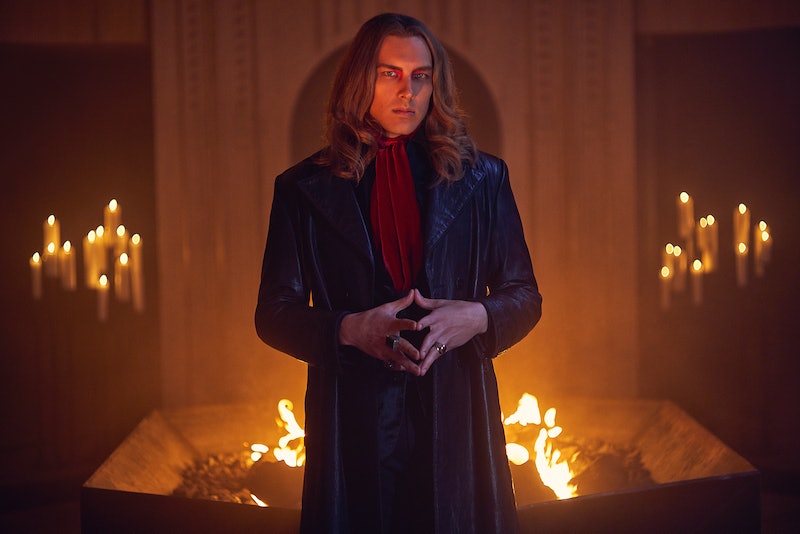 In Episode 3 of American Horror Story's ongoing eighth season, viewers learned that not only is Outpost 3 located in a former school, but that it used to be an academy for young warlocks. However, the flashbacks were the first fans had seen of these fancy magic men; neither the students or their teachers are anywhere to be found in present day —or anywhere else in the AHS universe, for that matter. So, what happened to the warlocks on AHS: Apocalypse?

Like an all-boys, very gay Hogwarts, the Hawthorne School was the male counterpart to Miss Robichaux's Academy for Exceptional Young Ladies in New Orleans, the backdrop for much of the action in Season 3's Coven. While in operation, Hawthorne was home to dozens of magical twinks who all looked as though the Warblers had dressed up for a school production of The Crucible. In their studies, they made fireplaces leap to life, books levitate, and crystal shards form into smooth, glassy orbs.

It also turns out that there was a good reason their school was located deep beneath the earth: Coven ended with Cordelia Goode "outing" the existence of witches to the world's general population. And while that may have suited her and her pupils just fine, it turns out that making that decision for magical people everywhere was a bit rash. In fact, the warlocks of Hawthorne were literally driven underground by hatred and prejudice after their original aboveground building was burned down.

But at some point in the three years between Michael Langdon's arrival at Hawthorne and the outbreak of World War III, all the students and teachers mysteriously vanished and the facility was taken over by the Cooperative for its own nefarious purposes. So where did they go?

The easiest answer is that Michael probably killed them all after he learned his true identity as the Antichrist. If he was to take over the world, he would likely want any magical threats out of his way. But considering that Cheyenne Jackson's name has been in the opening credits since the first episode of Season 8, the answer may not be that simple.

Jackson made his Apocalypse debut in Episode 4 as John Henry Moore, one of Hawthorne's teachers and a member of the warlock council. While his fellow instructors Baldwin Pennypacker and Behold Chablis (played by gay icons B.D. Wong and Billy Porter) were listed as mere guest actors, Jackson is credited as a main cast member, which — barring the possibility that he continues to appear only in flashbacks — must mean his character is still alive and scheduled to crash Michael's party at any moment.

If Moore did survive, could there be other warlocks out there as well? They were driven underground by adversity once before; what if they simply escaped even further underground this time? What if there's a bunker inside the bunker, keeping Moore and the surviving warlocks safe until it's time to align themselves with the witches and fight against the Antichrist?

Given how many times viewers have seen the witches resurrect each other throughout Coven — and now Apocalypse — it's probably difficult to keep a warlock down for long. Even if Michael did wipe out the entire school, it's only a matter of time before the boys of Hawthorne rise again and teach the son of Satan a lesson or two.