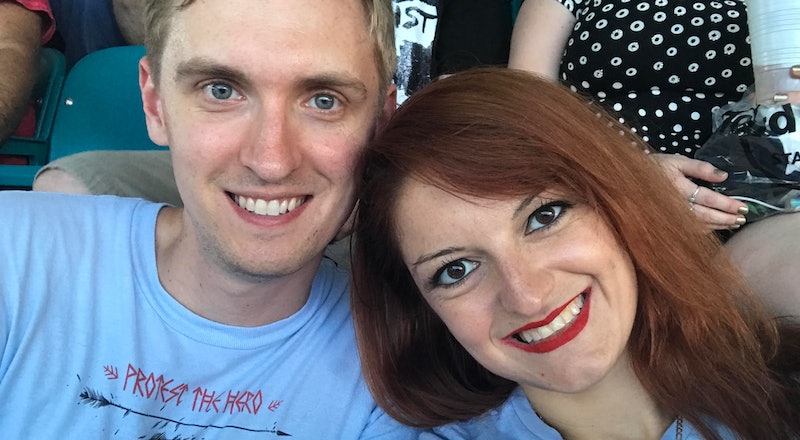 It has been almost three years since I entered into recovery for my alcohol addiction, and two years since my last relapse. Sobriety hasn't been easy. I went to rehab, lived in a halfway house, went back to my old life (without drinking) and eventually relapsed, then moved back in with my parents in order to figure out my next step. The most surprising thing about my journey, however, has been meeting my partner — and the support I received from him when he decided to quit alcohol in order to support my recovery.

In my early 20s, I lived in New York City and did what everyone else did there: I focused on my career. I started at the bottom, slowly rose up, took classes or found mentors when I needed to learn new skills, and, most of all, I felt successful. But in my late 20s, the pressure I put on myself to succeed became unsustainable. My drinking went from "sometimes a bit too much" to frequent blackout weekends. And, as with many alcoholics, the drinking escalated into my personal and work life until I had no other choice than to seek recovery.

All the while, I felt that something was missing. As a proud feminist, I rejected the idea that what I was missing was "a man." Yet I still had the nagging feeling that maybe if my dating life wasn't such a mess, things would have been different. I wondered if a partner would have noticed the stress and anxiety I desperately tried to hide from friends and from myself. But I was too ashamed to admit that maybe, despite having a fabulous apartment and a great job, it wasn't enough.

In my first therapy appointment after rehab, I revealed that my lack of a partner was one of the reasons that I had been drinking so much. A major difference between life in my early 20s and life in my late 20s was that all of my friends were now in serious relationships. I was constantly seeing the love and support that my friends received. Ultimately, it made me question why I hadn't found someone to love and support me too. And, although this wasn't the main cause of my drinking, it was always there in the back of my mind. Was I just not good enough?

When I went on my first date after giving up alcohol, I didn't expect much. I had just moved in with my parents and didn't know how to make friends without the social lubricant of alcohol. Adam and I matched right away on a dating app, and I revealed my recovery early on. He was understanding and, just a week after my move, we went on our first (coffee) date.

Our relationship grew quickly from there. A lunch date, a dinner date, and then an invite to his apartment to meet his dog (which was how I had originally started our conversation on Bumble) and watch Buffy the Vampire Slayer. His innate curiosity and constant kindness thrilled me. When he asked me to go away for the weekend two and a half weeks into dating, I agreed.

He had abstained on dates, slowly learning more about my struggles with substance use. I hadn't seen him drink until, during the trip, we were at a concert when he decided to have a couple of beers after I assured him it would be fine if he drank in front of me. Shortly after the trip, he met my parents and had a sake shot when my dad offered. Afterwards, he told me he didn't enjoy it and was considering giving up alcohol.

"For me?" I questioned. "Don't give up alcohol just for me."

"Don't be silly," he replied. "Who else would I give it up for? Besides, I want to support your recovery."

Over the next several weeks, we continued to talk about the role that alcohol may play in our lives. I was hesitant for him give it up completely, feeling that I wasn't "enough" of a reason to change something major about his life. I didn't want him to feel deprived because of me and possibly resent me in the long run. He reasoned that alcohol had never meant much to him, since he wasn't a happy hour or beer-after-work type of person anyway, and that supporting me was much more important to him than any enjoyment he may have from occasionally having a beer at a concert or at dinner.

When we moved in together shortly afterward, that was that.

We settled into life as a non-drinking couple but I continued to be surprised by his resolve to not drink in honor of my recovery. When his gym buddy wanted to go out bar hopping, he turned him down. When we flew to my friend's wedding and he met 20 of my friends all in one weekend, he dealt with his nerves without the consumption of alcohol. When he went on a bachelor party weekend, just as we celebrated dating for six months, he didn't let that keep him from his promise. Despite peer pressure and someone telling him that I'd "never know," he did not drink.

That resolve has continued through plenty of family vacations, celebrations, and times of stress.

It will soon be two years since Adam's initial decision to quit alcohol in order to support my recovery, and our relationship has never been stronger. We recently got married and, despite plenty of offers, never even considered celebrating our nuptials with the traditional champagne toast.

Since building a life together, I now have what I had previously told my therapist I was missing in my life: A loving, supportive partner who has stood by me when at times my stress or anxiety has gotten the best of me. The way he has unendingly been understanding and caring throughout my recovery has allowed me to grow stronger and I haven't had another relapse since before I met him.

Although we are occasionally still faced with situations where drinking is de rigeur (like friend's weddings and summer parties), having a partner who checks in on me, who holds my hand and squeezes tight if someone offers me a drink, and who easily says, "We don't drink," has been invaluable.

Being part of a couple who doesn't drink has made life easier for me. While other friends in recovery struggle with navigating the world of dating sober or learn to live with a supportive-but-still-drinking partner, I know that I am incredibly lucky for all of the ways that being with my partner has changed my life. I cannot truly know where I would be right now if it wasn't for the love and support that I receive from Adam as I continue down this path of sobriety.

When my partner quit alcohol in order to support my recovery, I knew that I was no longer left alone to deal with those negative thoughts and emotions that had previously led to my addition. Instead, his determination to make our relationship stronger gave me the strength to finally allow myself to grow into theperson I had always wanted to be.