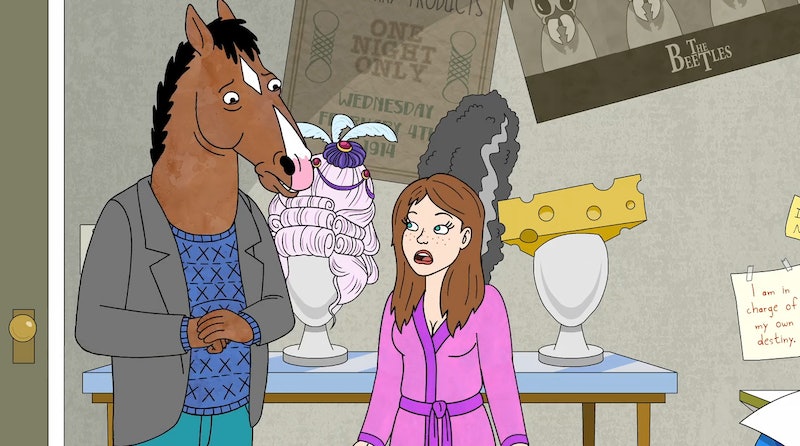 Memories of Sarah Lynn surrounded BoJack like the stars in the sky in the first half of the final season of BoJack Horseman. Thanks to rehab, he has reached some level of self awareness about his role in what happened to Sarah Lynn. But the hard truth about his involvement in her death is bound to come out in the final eight episodes when they drop on Jan. 31 — and not everyone else in Hollywoo is going to be so willing to accept BoJack's actions.

Despite Sarah Lynn being a major presence in BoJack's life from his days on Horsin' Around to the present, Kristen Schaal's character hasn't been alive on BoJack Horseman since Season 3's penultimate episode, "That's Too Much, Man!" An expert deflector, BoJack did a decent job of repressing how he was complicit in Sarah Lynn's death after their drug-fueled bender. But he finally addressed his feelings through therapy in rehab. Yet, while he has learned to live with himself, that newfound clarity is going to get murky once the public inevitably learns the real details of Sarah Lynn's death and he's (finally? possibly?) held responsible.

As BoJack creator Raphael Bob-Waksberg told Vox in 2016, Sarah Lynn's death was "pretty clearly telegraphed." And Hollyhock's friend's boyfriend helpfully reminded viewers in the midseason finale that Sarah Lynn's "Prickly Muffin" music video took place in the planetarium where she died. But whether her death felt inevitable or like a horrible accident, these are the BoJack episodes to rewatch in honor of Sarah Lynn.

You gotta start at the beginning to fully understand the relationship between Sarah Lynn and BoJack. The first episode has BoJack rewatching an episode of Horsin' Around where Sabrina calls the Horse "Daddy" for the first time and BoJack got teary-eyed about Sabrina growing up before our eyes.

When Andrew Garfield breaks up with her, Sarah Lynn moves in with BoJack. But it quickly turns into them sleeping together. After realizing that they both have "substance abuse issues and daddy problems," BoJack attempts to help her into rehab again. But instead, she goes off into the world trading in her old wholesome catchphrase for, "Suck a d*ck, dumb sh*ts!" Look out for all the tie-ins between this episode and her death in Season 3.

While on drugs provided by Dr. Hu, Sarah Lynn proposes killing BoJack to make a good ending to his book. How's that for some bitter irony. Another sad note is that his daughter with Charlotte in BoJack's drug-induced dream is also voiced by Schaal.

The heroin that eventually kills Sarah Lynn is introduced in the sadly appropriately-titled "BoJack Kills."

Sarah Lynn is nine months sober when BoJack calls her to party after he wasn't really nominated for an Oscar. They embark on an "epic bender" in which BoJack keeps blacking out, for a month. After visits to Sarah Lynn's Alcoholics Anonymous meeting, Diane and Mr. Peanutbutter's House, and Oberlin College to make amends with Penny, they end up back in Los Angeles where they do the "BoJack Kills" heroin that was in BoJack's glovebox.

In a grimy hotel room, BoJack tells Sarah Lynn he loves her. She doesn't respond and turns on the Oscars, realizing that she actually won one that night. Full of self-loathing for being with BoJack instead of at the ceremony, she asks BoJack, "Am I doomed?" At this, BoJack finally honors her wish of going to the planetarium, where she ultimately dies.

A flashback of BoJack visiting Sarah Lynn when she was the biggest pop star in the world provides a rare look at an older Sarah Lynn before her addiction takes over her life. She's willing to be vulnerable with her old friend, but once she learns BoJack is only there to ask her to guest star on his failing The BoJack Horseman Show, she doesn't hide her disappointment. In the present, MSNBSea announces Sarah Lynn is dead at the age of 31. After Sarah Lynn's funeral, BoJack is inspired to help Ethan actor Bradley launch his Horsin' Around spinoff. But when the young actor in the Sabrina role reminds him too much of Sarah Lynn, BoJack flees the set and Hollywoo.

After driving off in the Season 3 finale, BoJack ends up in Michigan. But he still can't escape Sarah Lynn. A miniseries about Sarah Lynn is made and BoJack watches Paul Giamatti portray him in his abandoned family home while memories of his mother's childhood surround him.

After BoJack says he's "the one who has suffered the most" because of his actions at the Philbert premiere, Diane calls him out over Sarah Lynn. "You feel a lot of guilt because you were the only father figure she ever had, and when she came to you for help ... you had sex with her!?," Diane demands. "And then when she was sober, you took her on a month-long bender? And then she died. And she is dead now." Diane's words only send BoJack into a deeper spiral as he continues to abuse his pain medication. It takes him strangling Gina on the Philbert set for him to enter rehab and confront his feelings of guilt over Sarah Lynn.

The final season opens with what BoJack did immediately after Sarah Lynn died, including lying to Sarah Lynn's mother and the police about how he wasn't with her when she died and he didn't know where she got the heroin from.

Turns out, BoJack used to drink vodka out of a water bottle on set and was the first person to inadvertently introduce Sarah Lynn to alcohol. When she became intoxicated and had to leave the set early, BoJack blames stylist Sharona for exposing Sarah Lynn to the vodka. The show must go on, right?

The dogged Philadelphia Story-inspired reporters Paige Sinclair and Maximillian Banks investigate Sarah Lynn's death at the insistence of her mother. And as they follow in the footsteps of BoJack and Sarah Lynn's final bender, they're getting close to figuring out that BoJack was with her when she died.

For a bonus episode, watch the Horsin' Around holiday special where the Horse gives Sabrina the best Christmas ever even though he can't bring back her parents. Released in between the first two seasons, "Sabrina's Christmas Wish" is inevitably tinged with sadness now due to Sarah Lynn's fate. But the wholesomeness of a young Sarah Lynn in Horsin' Around may fill you with the tiniest bit of cheer before the melancholy officially sets back in for good.

More like this
The ‘Emily In Paris’ Season 3 Trailer Teases Major Career & Love Crossroads For Emily
By Bustle Staff
The First Trailer For 'That '90s Show' Includes So Many Nods To The Original Series
By Jack Irvin, Alyssa Lapid and Grace Wehniainen
Elizabeth Debicki On Her Approach To The Most Debated Scene From 'The Crown'
By Grace Wehniainen
Evan Peters Decompressed After 'Dahmer' By Watching This Will Ferrell Movie
By Grace Wehniainen
Get Even More From Bustle — Sign Up For The Newsletter