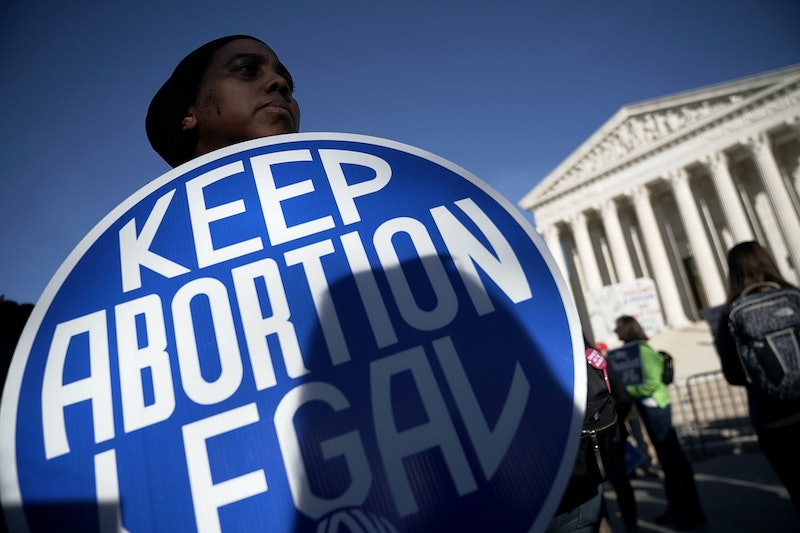 Supreme Court Justice Anthony Kennedy announced his retirement on Wednesday, setting the stage for President Trump to make his second appointment to the high court of his presidency. This will almost certainly shift the court to the right, and creates the very real possibility that the Supreme Court will overturn Roe v. Wade at some point in the future. But what would it mean if this happened?

Court observers are bullish on the odds of the Supreme Court banning abortion once Trump's appointment, whomever it is, gets confirmed by the Senate. The New Yorker's Jeffrey Toobin predicted Wednesday that "abortion will be illegal in twenty states in 18 months," while Vox's Dylan Matthews pegged the odds of such an outcome at 70-80 percent.

Roe v. Wade, of course, was the landmark 1973 SCOTUS decision that granted American women the constitutional right to abortion. Although many states have passed laws limiting access to abortion, Roe makes it illegal for states or localities to outright ban the procedure. During his presidential campaign, Trump said that he would appoint anti-abortion judges who would overturn Roe. With Kennedy retiring, the court may soon have the votes to do this.

"Anti-abortion groups are explicitly saying this seat is the moment to overturn Roe," Planned Parenthood tweeted after Kennedy announced his retirement. "THIS is what's at stake."

There are infinite ways the court could go about repealing Roe, as it would depend largely on the judicial challenge that leads the court to reconsider the ruling. Such a ruling could take many forms, and it's impossible to say exactly what it would look like. The overturning of Roe wouldn't result in abortion immediately becoming illegal nationwide; however, it would allow states to pass laws that completely ban abortion.

Some states won't have to: Louisiana, Mississippi, North Dakota, and South Dakota have already passed laws that automatically ban abortion if Roe is overturned.

Likewise, there are ten states that still have pre-Roe laws on the books banning abortion. Those laws are currently unenforced because of Roe, but they'll become the law of the land if the court strikes Roe down. Those states are Alabama, Arkansas, Arizona, Massachusetts, Michigan, Mississippi, New Mexico, Oklahoma, West Virginia and Wisconsin.

On the flip side, eight states have laws on the books that protect a woman's right to abortion even if Roe does get struck down. Women in California, Connecticut, Delaware, Hawaii, Maine, Maryland, Nevada, and Washington will have the right to abortion regardless what happens to Roe, thanks to state laws.

As First Amendment lawyer Greg Lipper points out, it's also possible that a Kennedy-less Supreme Court could allow states to effectively ban abortion without actually overturning Roe. Some states have passed laws that, while not literally banning abortion, make the procedure extraordinarily difficult, and in some cases impossible, to access. Iowa, for instance, recently passed a bill that bans abortion after six weeks — before most women even know that they're pregnant.

Anti-abortion lawmakers often pass laws like this not only to limit women's access to abortions within their states, but also in hopes that they'll end up before the Supreme Court and hopefully chip away at Roe's protections. It's possible that a court with Trump's next appointee could uphold a law like Iowa's by ruling that it doesn't violate Roe, which would allow states to effectively outlaw abortion despite Roe technically still being the law of the land. In other words, the court could keep Roe but render it toothless.

There is a chance, albeit a slim one, that Trump won't be able to get an anti-Roe judge confirmed. Republican Sen. Susan Collins — whose vote may be be necessary to confirm the next justice, assuming every Democrat votes against them — said Wednesday that she believes Roe is "settled law," raising the possibility that she could vote against an anti-Roe appointee.