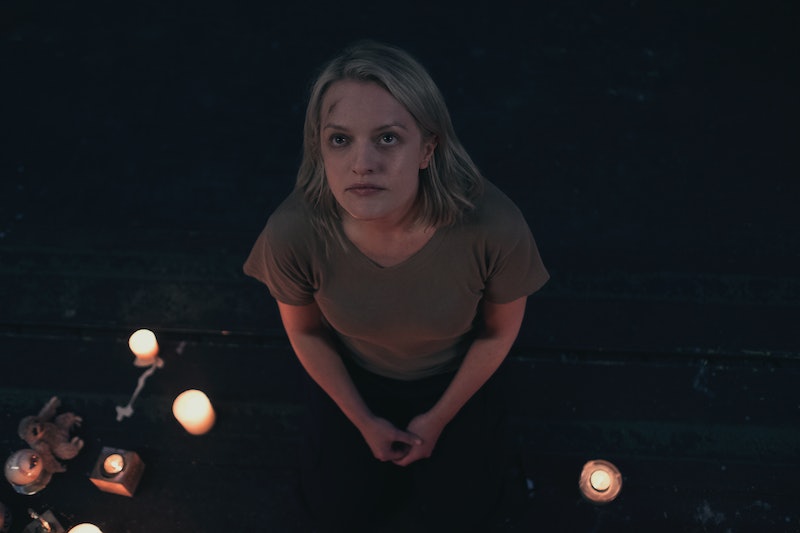 Spoilers ahead for Season 2 Episode 4 of The Handmaid's Tale. This week in dystopian Gilead, June was quickly stripped of any hopes she had of escape. After a close call with a plane bound for Canada, the episode opens to June, chained to a bed in the middle of a cold, concrete room, and it is clear that her transgressions will not be forgotten. She can't be harmed too much now, though, given that she's carrying a child. But after June gives birth on The Handmaid's Tale, what happens next will likely be far from pleasant.

Aunt Lydia seems to try and convince June that from here on out, if she wins back the affections of the Waterfords and maintains good behavior, she can continue living as Offred and perhaps make a life for herself as a dutiful handmaid. But if she continues to resist, insisting upon calling herself "June," Aunt Lydia says she'll be chained to that bed until she gives birth, and then she'll be executed. It's unclear if there's any real path for June to redeem herself to Gilead's leaders, or if that's just a pipe dream being sold to her by Aunt Lydia in order to make her more manageable, but it's unlikely that she'll be able to escape totally unscathed, even if she does continue to cooperate.

The one thing that June might have going for her is the fact that the Waterfords are attempting to pass her disappearance off as a kidnapping, not an escape attempt. If she was charged with running away, she could face the same penalty that Jeanine was subject to earlier in the season — she might not have endangered an actual baby, but in the eyes of Gilead, endangering her pregnant self might be just as bad.

Jeanine faced being stoned to death by her fellow handmaids as penance for that crime, and when that didn't go exactly as planned (in large part thanks to June), she was sent to wither away at the Colonies. But, if the Waterfords are staunch in their determination to make this a kidnapping case, probably to further demonize the rebels and also to convince everyone that the handmaids are perfectly obedient, June might sneak by without a similar fate.

Things are getting more and more tense between June and Serena as time goes on, though, as this episode demonstrated. Serena doesn't even want her in her house at this point, and will likely be pushing for harsher punishment for her when the time comes. But given June's strange, almost friendly relationship with Fred, he might be willing to protect her in some way. And, if June proves able to deliver a healthy child, she could be kept around for the sake of having more of them, though she would probably be reallocated to another home.

Still, the more the show goes on, the more Gilead seems to treasure its power over women more than the actual mission to reproduce. Janine, Emily and Moira were all fertile women, but because of their unruliness were still relegated to positions at the Colonies or as Jezebels. Now that the Waterfords know that June has connections to the people working to help handmaids escape to Canada, she could definitely face the same fate.

Any potential punishment for June all comes down to how much Fred is willing to stick his neck out for her, if June is even still around to sustain any repercussions, and possibly, her behavior from here on out. It certainly adds fuel to the fire to escape — now she's not just looking to leave an incredibly abusive household where she's essentially a slave, but now she needs to worry about escaping imminent death as soon as she gives birth. It's a dire situation, and June will need all the help she can get.