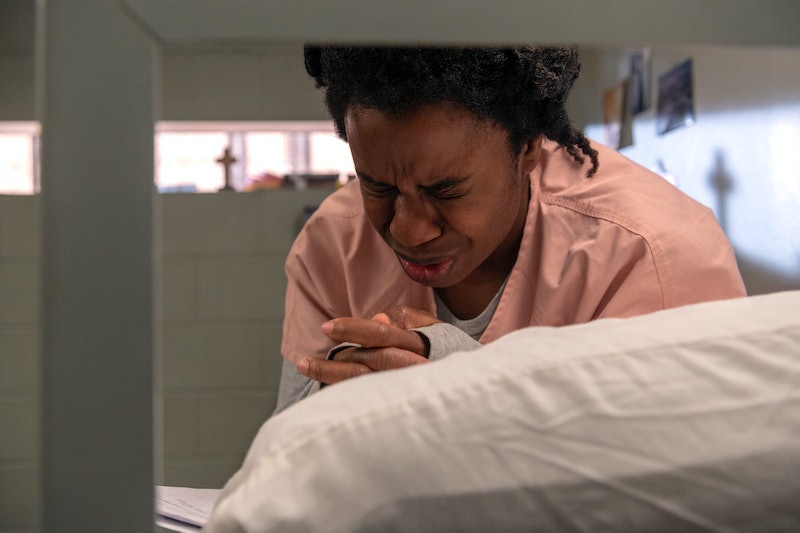 Spoilers ahead for Orange Is the New Black Season 7. When Suzanne "Crazy Eyes" Warren was introduced in the first season of Orange Is the New Black, her mental illness was often dismissed as a punchline, or else viewed as a threat by the guards and other inmates. But throughout the course of the series, we've been able to see Suzanne in her totality: as a devoted, caring, and vibrantly creative woman serving prison time for a crime that she didn't fully comprehend. She's always believed that she did something bad, and thus belongs in prison, but in OITNB Season 7, Suzanne finally begins to understand the unfairness of the world and, in particular, her incarceration. Of course, this revelation doesn't mean that Suzanne gets transferred to a facility where she'd be able to get the care she needs, but she does begin to learn how to manage her own mental health and make the best of her circumstances; after all, she's always looked on the bright side.

In the Season 7 premiere, Suzanne doesn't realize that just because the the judge and jury found Taystee guilty, that doesn't mean she killed Piscatella. Black Cindy, racked by guilt, lashes out at her. "Suzanne, everything is broken and life is unfair," she snaps. "When are you gonna learn that?" In Episode 2, Pennsatucky helps hit that message home by incredulously asking Suzanne, "Do you really think you deserve to be here?" This prompts Suzanne to talk to her mom about the crime that landed her in prison, which was shown in Season 4's "People Persons." She tells her that she had just wanted to be friends with Dylan and didn't realize that she was kidnapping him, and that when he later fell to his death, she had genuinely been trying to help the young boy.

Suzanne was sentenced to 15 years in prison, even though she has a mental illness and meant Dylan no harm. But this is the first time that she has truly been able to see the inequity of her situation. Because, as her mom says, "You deserve to be in a facility that can help you with your cognitive difference" — and that place certainly isn't Litchfield, especially once Linda closes down the prison's psych ward.

Suzanne recognizes that Litchfield Max doesn't help her with her mental illness and asks her mom if it's fair that the judge sentenced her to prison. Pat Warren replies honestly, "No, you don't deserve to be here. It's not fair." Having what Taystee and Pennsatucky said confirmed by her own mother changes Suzanne's entire mindset for the rest of the season — and perhaps the rest of her life.

She decides to attempt to right the wrong of Taystee serving life in prison by testifying she saw the CERT officers carrying in Piscatella's dead body and planning to frame the inmates. This doesn't end up helping Taystee's case, but it does give her some hope after struggling with suicidal ideation. And Taystee is grateful to Suzanne for at least sharing the truth.

In a happier turn of events, Suzanne also comes into her own while taking care of chickens as part of the farm therapy that the newly-appointed warden, Tamika Ward, has established. C.O. Alvarez names Suzanne the Mayor of New Cluck City and remarks that the therapy is working, since she has become empowered by "taking responsibility of others" besides herself.

Suzanne's new sense of self also leads her to help her roommate Pennsatucky prepare for her GED exam. Now that Pennsatucky has been diagnosed with dyslexia, Suzanne relates her own "special brain" to Pennsatucky's and gives her roomie a major confidence boost. Like with trying to prove Taystee's innocence, there isn't a happy ending here since a distraught Pennsatucky overdoses and dies after assuming she failed the exam (she didn't). But how Suzanne handles Pennsatucky's death shows how much she has grown since Season 1.

In the series finale, Suzanne isn't overwhelmed by her feelings of sadness or grief. Instead, she accepts the reality that Pennsatucky died and tells Taystee, "I understand I can't control things." When Taystee asks her if she has been reading self-help books, Suzanne replies, "No, I'm growing up. It's hard, but it's happening." Taystee says she's proud of Suzanne and encourages her to "keep goin'" with this version of herself. And viewers will be proud of all the progress Suzanne has made too — especially as she has done it with little to no support from the facility that should be looking out for her health and safety.

Suzanne's story ends with her singing a duet of the old Mountain Dew jingle in honor of Pennsatucky. She also says goodbye to her chickens since she doesn't want them to be kept in a cage, as she is. And finally, she begins working alongside Taystee to help her with the newly established Poussey Washington Fund, which provides micro-loans to ex-convicts in order to help them get on their feet after release.

The justice system may have failed Suzanne, but she's used her time in prison to become as healthy and self-aware as she can without the proper support. So unlike many of the other characters, Suzanne's arc is rather happy. And even though that may not be the case for many incarcerated women with mental illnesses, it's the ending that Suzanne deserves.