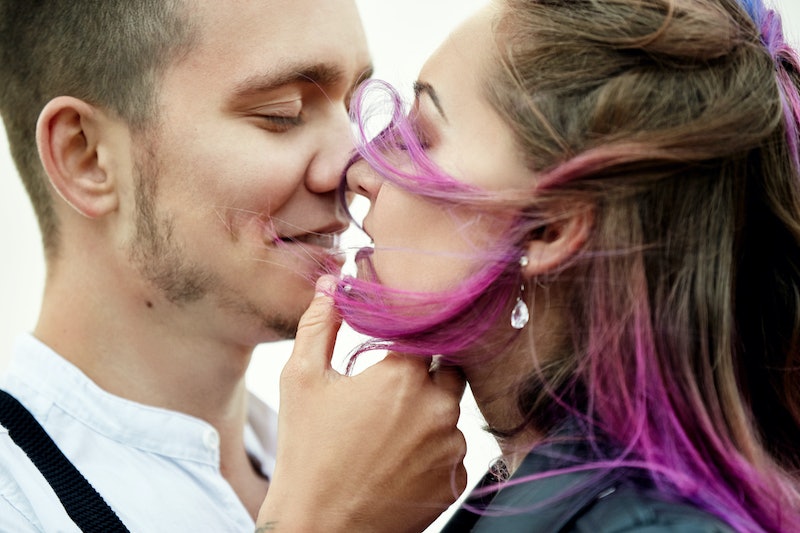 Getting turned on refers to a physiological reaction we have to stimuli that gets us mentally and physically prepared for sex. Quite literally, it's like turning on a light switch — where there was darkness is light now. Where there was nothing, there is sensation now. While there are some obvious indicators, what actually happens to your brain when you get turned on is not likely something many of us put much thought into. But honestly, you should, because it's fascinating, and sexy.

Physically, our bodies portray arousal in subtle ways, blushing, dilation of the pupils, increase of blood flow and lubrication to the genitals, erecting nipples, but chemically, our bodies are doing even more exciting things, on a totally invisible scale. According to Dr. Jess O’Reilly, resident sexologist for ASTROGLIDE, sex is a brain activity more than it is a body activity.

"Though we often associate the heart with love and sex, its involvement in sexual processes is actually very minimal in comparison to that of the brain." O’Reilly tells Bustle that while sex is a multi-sensory experience (that intersects with physical, psychological, relational, and emotional processes), all of the senses are connected to the brain.

"Your brain on sex looks something like this: The pituitary gland is lit up; the nucleus accumbens and ventral tegmental are activated; the hypothalamus is kicked into high gear," O’Reilly says. It's a firestorm of words and reactions that are hard to pronounce but that even in their complexity look sexy. "Essentially," O’Reilly breaks it down, "as you’re slipping into euphoria, the center of reasoning and behavior in your brain completely shuts off." Aka, the more turned on you get, the less room you have for other thoughts. You brain becomes a pleasure center and all you can focus on is "yes, yes, yes."

While sex is surely a physical and chemical activity, O’Reilly tells Bustle that it's officially proven to be an emotional one, too. "Confirmed by positron emission tomography (PET) scans of the brain taken during sexual activity and orgasm, the scans showed that during sex, the brain’s reward circuit lights up. Both the amygdala, which controls emotion, as well as the area which manages muscle function are activated." Meaning, you are both physically and emotionally feeling the rewards of positive sensations — your body feels good, your thoughts are positive, if you're enjoying it. "From a chemical perspective, the zones related to dopamine release turn into hotbeds of activity during sex, resulting in heightened levels of the feel-good neurotransmitter," O’Reilly explains. Meaning, your brain is being triggered to send chemicals into your blood stream that create a general positive feeling, proving that for most healthy adults, it feels good to get turned on, in more ways than one.

Additionally, "when the pituitary gland becomes activated, endorphins, oxytocin, and vasopressin are released, promoting intimacy, bonding and even pain reduction," O'Reilly says. Yes, arousal can even fight off a headache or at least distract you from certain dull or chronic pains. "These evident brain responses can serve to help you to understand and manage your emotions before, during, and after sex," O’Reilly tells Bustle, reminding us the real meaning of getting "carried away".

If you're imagining your aroused brain like a Lite Brite, that's just about right. O’Reilly says that the human brain during orgasm looks almost identical to a brain on drugs, also shedding light on why it's possible to get hooked on sex, too. "Since the lateral orbitofrontal cortex, the section responsible for rational decision-making, turns off completely during orgasm, we often toss logic aside when we’re faced with the prospect of sex," O’Reilly warns, stressing the importance of being aware of the power of arousal.

Whether you're watching a steamy scene on the screen or getting close with a potential partner, your brain is shifting into a powerfully ambitious mode that's going to have room for only one thought: sex. So if you are in a position to transition into sex, it's important to know that your brain is not going to be on call to help you decide whether or not having sex is a good idea or not. Don't ever belittle your sex drive, if you've decided in your pre-aroused mind that engaging in sex isn't a good idea, make that clear to the person you're with and create distance if you need to.

More like this
These 4 Signs Are The Seductive Sirens Of The Zodiac
By Brittany Beringer
The 19 Best Tweets & Memes About Bisexual Awareness Week
By Lexi Inks
Are Quality Time & Gift-Receiving Love Languages Compatible?
By Lexi Inks
Why A Libra & Libra Couple Might Become Codependent
By Kristine Fellizar
Get Even More From Bustle — Sign Up For The Newsletter