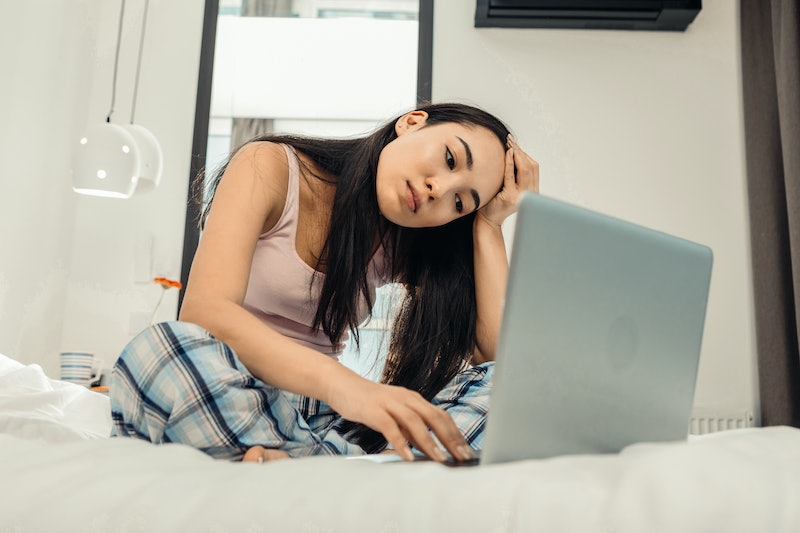 We've all been there: on the couch, surrounded by snacks, heading into hour five of a TV-watching marathon. It can happen when you're totally absorbed in a show, or when glazing over after a long week at work. But whatever the reason, it can also leave you wondering how all that screen-time will impact your brain.

To start with the good news, experts say it's beneficial, in many ways, to hunker down and watch something fun. "[Marathon-watching] can create a sense of well-being in a highly stressful world," Dr. Carla Marie Manly, a clinical psychologist, tells Bustle. "In fact, when the shows feel soothing, there is a rise in feel-good neurochemicals such as serotonin. And, when the shows are upbeat and humorous, the rise in serotonin can be marked."

This might explain why you feel like a new person after watching a string of comedies, or as if all your problems have melted away when marathoning Friends for the millionth time. Sometimes you just need to kick back and be surrounded by positivity for a while, and not think about the parts of life that are stressful.

While it's nice to relax alone, this boost can be even more powerful if you watch with other people. "When we partake in television marathons with others, the added benefit of feeling connected to another person also creates an increase in the body’s positive, bonding neurochemicals," Manly says. "All of these effects tend to combat and decrease the unhealthy effects of chronic rushes of stress hormones, such as adrenaline and cortisol."

There's a positive side to marathon-watching your favorite series, but there's also good reason to eventually get up and do something else. "One of the biggest issues with watching a lot of TV is that people aren't moving for long periods of time," Kellie Zeigler, a certified applied positive psychology practitioner, tells Bustle. Aside from making you feel stiff or tired, sitting stagnate for too long can impact your brain.

You've likely heard about serotonin and the impact it can have on your overall sense of well-being. "It regulates appetite, mood, and sleep so it is very important to our physical and mental health," Zeigler says. "Sitting for more than 20 minutes at a time decreases the production of BDNF," and that can result in less serotonin.

All of that said, you should feel free to marathon-watch TV, movies, or whatever else strikes your fancy. But it's better for your brain if you get up every half hour or so, or on commercial breaks. "You may have heard time and time again to get up and move more and this is why," Zeigler says. "There is a scientific basis for why adding in more movement increases happiness and helps protect our mental health."

And since marathon-watching can leave your brain craving immediate gratification, Mia Rosenberg, LCSW, a psychotherapist in NYC and owner of Upsider Therapy, tells Bustle, it may be even more reason to watch one show a a time. "This is not something that we can fulfill in other areas of our lives," she says, so you might start to feel overwhelmed by the thought of not continuing on to the next episode.

If you start to get stressed, practice some patience, Rosenberg says, and step away for a while. As with anything, it's all about finding a balance. If day turns to night and you're still basking in the glow of the TV, take it as a sign to get up and stretch. Or to try another way to de-stress.

"In general, it’s ideal to have a good balance that includes only occasional TV marathons," Manly says. "As soothing and calming as such [marathon-watching] can be, it’s always a good idea to find comfort in other activities— particularly those that include physical exercise. For example, after a Saturday marathon of your favorite reruns or feel-good movies, it can be super healthy to balance that spree with a gentle hike, a yoga class, or a walk in the park." Whatever you choose, it can all be good for your brain.