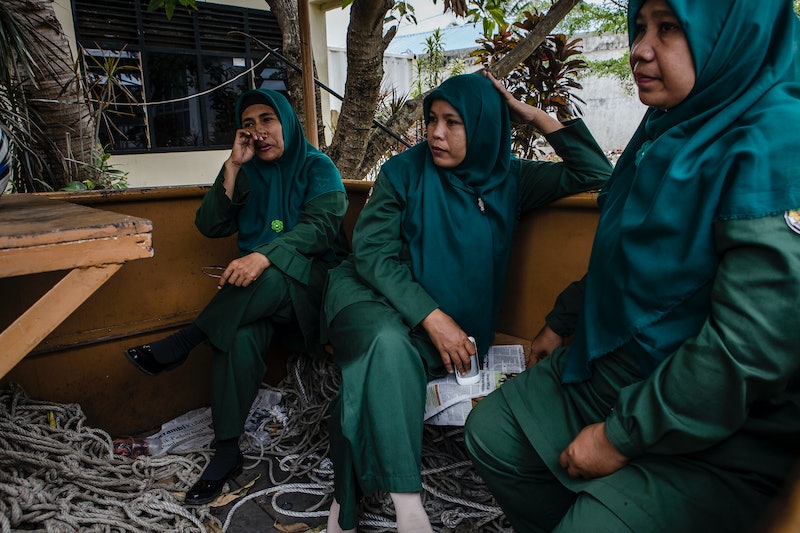 I remember the first time I tried to wrap my hair. The fabric I used was rough and thick, so it was difficult to tie down. The woman who I credit with welcoming me into Islam gave me my first proper hijab; she also shared lessons with me and invited me to my first Eid. When I think of how I strive to live, I think of her. Becoming a Muslim has been beautiful. My motivation is getting closer to the creator and being the best version of myself.

But a lot of people don’t think of that when they see me.

My journey of self discovery through Islam has been resolution-based, so I am hopeful that many non-Muslims are open to being more inclusive. A lot of pain and unnecessary discontent could be avoided if non-Muslims understood how important this is to me. All of our children would be substantially less likely to have their lives permeated by hate if non-Muslims empathized with our frustrations.

Here’s what I need non-Muslims to know:

1. I want Christians to understand that it is unacceptable to condemn us because we don't fit the stereotype of Muslims.

I posted a photo on Instagram from an event I attended. I happened to wear my shayla that day. A childhood friend sent a personal message related to safety pins. I ignored it. A few months later, when she saw me out in clothes she considered to be too revealing, sans head-wrap, she said it was proof that I should just admit that I want to be a Christian because I was a “bad Muslim”. This limited perspective is a micro-aggression that attempts to re-center the conservative narrative of Islam.

And what’s with this notion that Muslim women are just slaves to our men? Without my hijab, the people I encounter often feel safe enough to double down on their ignorance. I once heard a Christian woman explain to me that Muslim women had to walk half a block behind their husband in public. She went on to describe (in astonishingly inaccurate detail) how women had to be married by age 12 and were not allowed to look men in the face. My Muslim sisters have also heard men fetishize them, suggesting that Muslim women were easier to control because they have to do 'anything a man says.'

First of all, I don’t have a man and I am well into my thirties. Let’s start there. But more importantly, my spiritual choices are not predicated on what someone with a penis allowed me to do. To suggest otherwise puts an asterisk on our accomplishments. If I have achieved a certain level of success that you have been unable to experience, don't discredit me based solely on your assumption that my husband (or father or brother) was the brains behind the operation. Don't project your insecurities onto us.

My motivation is getting closer to the creator and being the best version of myself. But a lot of people don’t think of that when they see me.

2. I want overt racists to know that we refuse to be silenced by your threats.

I wish I could think of a way to rip off a symbol of whiteness from these type of people the way cowardly white men rip off our hijabs. You cannot get rid of us. You cannot shame us into submission. You cannot stop us from being happy.

You cannot ban us all.

3. I want so-called allies to know that their safety pin activism won't protect us.

Seriously, if I see one more white woman whitesplain Islamophobia to a Muslim woman while wearing a safety pin, I might snap. Who even came up with that passive, watered down excuse for activism? Wearing a safety pin (or whatever white savior souvenir is trending next month) does not mean you get to determine how I respond to oppression and state-sanctioned violence. I volunteer with a youth group for at-risk teens, and it was there that I saw my first safety pin activist IRL. I didn't notice the pin until she tried to shut down a Black student who was discussing police brutality with a "not all cops" argument. It's the same with folks who donate to Free Palestine campaigns, but remain silent when Muslims are verbally assaulted.

It is imperative for genuine allies to listen to the voices of those being marginalized. Take the time to find out what we need. Look to our community for guidance rather than trending hashtags.

Instead, pseudo-activist trinkets just remind us that many so-called allies would rather be rewarded for their words than berated for engaging in real action to support us.

I need to let so-called allies know that your silent protest won't protect us and you shouldn’t be surprised when we dismiss your empty promise.

What can we as Muslim women do to push back against white supremacy and Islamophobia?

Allah has been an anchor for me. The love and strength of my sisters nurtures my soul and I am dedicated to doing more than call out oppressive behaviors. Here are some practical things we can do to fight against this oppression:

Retreat into your faith as needed. Self care is absolutely imperative. It is one of the most under-utilized tools of resistance. Racism and Islamophobia aren’t going anywhere in our lifetime, so we need sustainable survival plans. A great deal of our strength comes from prayer. When we wake before dawn and connect with Allah, we gain protection. Be close to others who love and respect Islam.

Rebelliously magnify the problem. Resist white supremacy despite the way mainstream media posits us as savages. Malcolm X, one of my heroes, said that “we get tricked into being nonviolent”. Those of us who speak out are often labeled as divisive or petty. He went on to say “don't ever think that they're going to do it just on some kind of morality basis...you can't stop it with love.” There are times when so-called peaceful protests are effective, but sometimes other means become necessary. Civil disobedience has long served people who look like me. The lunch counter sit-ins and Freedom Rides are praised today, but back then it was seen as the ultimate betrayal of status quo. Brothers and sisters are being arrested so they can feed the homeless and stand up for the victims of police brutality.

It might be uncouth to correct your co-worker's reference to a comedian's anti-Muslim sentiments in the staff meeting, but water cooler banter be damned, that's exactly what you need to do. Trust yourself. Act from a place that exemplifies our intrinsic pursuit of peace. Sometimes that means upsetting people.

Prepare our children for the political reality of being Muslim. Much like teaching Black children about what to do when stopped by a police officer, it is imperative that we make young Muslims aware of potential danger. We can also listen to our children because youth are often the most in tune with effective forms of resistance. Before we go to the airport, I tell my son about why people might stop us and ask to touch my hijab. I recommend that if your child is participating in daily prayer, they are likely old enough to understand simple conversations about prejudice. We want our your little ones to be aware without being scared.

How can non-Muslims earn our trust as allies?

Publicly and consistently recognize white terrorism in your white networks. The church bombings, genocide-adjacent police brutality cases, and acts of violence against Native people deserve our collective outrage — not Muslim women who are just minding their business.

Drop some anti-Islamophobia in unrelated everyday conversations for no reason. Become the friend that all your white friends stop inviting out because you bring up Islamophobia too often. Rev. Ranwa Hammamy explains that “surah tells us to engage in fierce resistance.” That is the theme with which allies can gain our trust.

I hope that calling out these three groups helps my Muslim sisters navigate white supremacy while also opening the eyes of borderline allies to their problematic behaviors.

Above all, I want non-Muslims to know that it is never too late to be there for us in a more meaningful way.