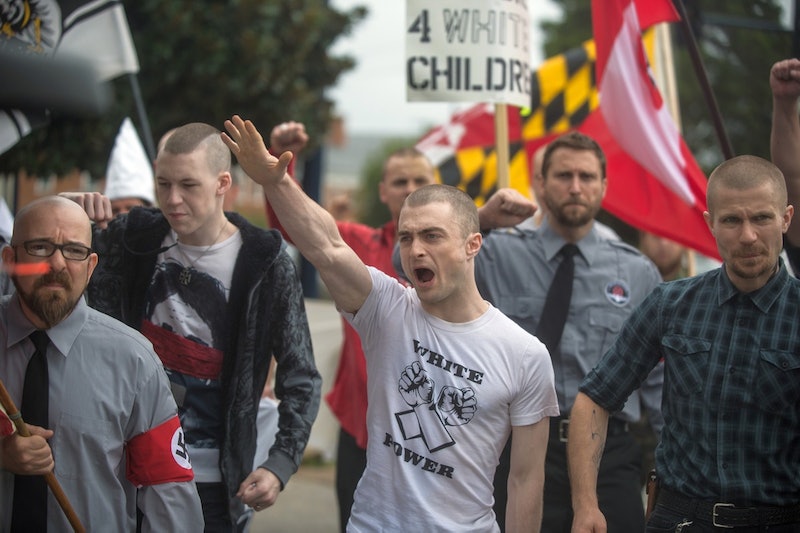 Imagine you're a Hollywood executive, and you want to make a movie about terrorism in modern day America. What story would you tell? Would it be a movie about the Orlando shooting, or maybe 9/11? Or, would it be about a (probably white, male) American hero who stops a (Middle Eastern) terrorist from killing other (white) Americans? That seems much more likely, as, after all, the modern narrative about terrorism in America tends to favor the "us vs. them" dynamic. Yet Imperium, a new terrorism-focused film drama starring Daniel Radcliffe, isn't about foreign terrorists at all. Instead, Imperium is about the very real threat of white supremacists here, in the United States. And sadly, considering the current social and political climate, Imperium is terrifyingly relevant, as it forces audiences to reflect on the very real movement of white supremacist ideology from the fringe to the mainstream.

Today, figures like radio host Rush Limbaugh are embraced as media moguls, a candidate for president proposes banning an entire religion of people from entering the United States, and white supremacists are, sadly, not considered too far outside the mainstream conversation. Just a few weeks ago, the chairman of the American Nazi Party essentially endorsed Donald Trump for president, and while people may not have been too surprised considering Trump's own publicly stated views, that doesn't make the endorsement any less terrifying. Speaking about Trump and his more extreme supporters, Anti-Defamation League National Director Jonathan Greenblatt told The New York Times in July that Trump's campaign has aided in "the mainstreaming of these really offensive ideas," adding that this has "allowed some of the worst ideas into the public conversation in ways we haven't see anything like in recent memory."

Imperium doesn't directly address Donald Trump, and writer-director Daniel Ragussis, story writer (and former FBI agent) Michael German, and star Daniel Radcliffe have stayed mum on the matter as well. Still, it's impossible to watch the film and not see a connection between the hate explored in the movie and the hate becoming mainstream via Trump's candidacy. Imperium follows FBI Agent Nate Foster (Radcliffe) who goes undercover to infiltrate a group of white supremacists believed to be planning a big terrorist attack, and it's based on the experiences of German. When you hear the words "based on a true story" and "terrorist attack" in today's climate, your first thought probably isn't that it involves white supremacists and neo-Nazis. But it is precisely this mistaken belief — that it's rarely white people who commit such crimes — that makes Imperium such a crucial movie for modern audiences, both in terms of Trump's candidacy and the racially-motivated hatred brewing in America.

In the film, Angela Zamparo (Toni Collette), Nate's case handler, seems to be the only high-ranking official at the FBI offices passionate about stopping domestic terrorism. Her domestic terrorism unit is depicted as severely underfunded and understaffed, especially compared to the units investigating foreign terror threats. Unfortunately, this mirrors the real life structure of law enforcement in the U.S., which suspended the Domestic Terrorism Executive Committee in the Department of Justice post 9/11. (It was later revived in 2014 following a string of domestic terror attacks, many of which had connections to white supremacist ideology.)

By exposing this gap in our framing of terrorism, Imperium forces audiences to come face to face with the idea of how, by focusing primarily on the fight against foreign terrorists, America could be inadvertently allowing a growth in extremist white nationalism or neo-Nazis. At the very least, the fear of terrorists from foreign nations breeds a paranoia of "others," which leads to an environment that is less hostile to hateful white nationalism than it should be. And this is where Imperium is so tragically relevant.

The exact timeframe of Imperium isn't emphasized, meaning it could take place pretty much anytime post-9/11, except for one thing: a photo of Charleston shooter Dylann Roof, who appears in a series of photos of white supremacist terrorists briefly shown in the film. Not only does the photo place Imperium squarely in a post-2015 world, but it also identifies Roof, a white man who, in 2015, went into a historically African American church in Charleston, South Carolina, and shot and killed nine black people, as an example of white nationalist extremism — something even mainstream news outlets like Fox News have failed to do. Though some media outlets were initially careful not to declare his crime as racially motivated, Roof's racist manifesto was later discovered, leaving little doubt as to the reasoning for his crimes.

Hateful language or attitudes do not always lead to hateful acts, of course, and it certainly doesn't commonly lead to acts of extreme violence, something Imperium is also very careful to demonstrate. However, the movie does challenge its viewers to examine how much hate we're willing to let brew in our own backyards, and what horrors that hate could lead to if left unchecked.