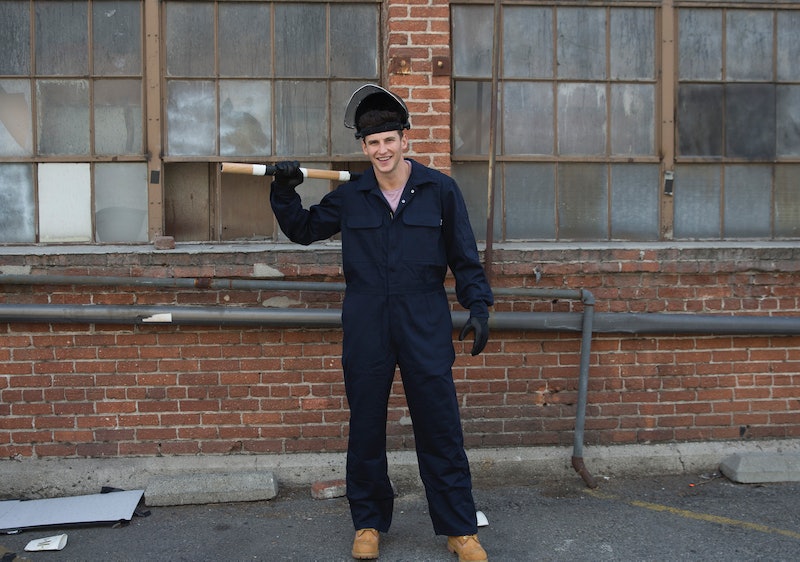 Blake has been leaving a strong impression on Becca, not to mention Bachelor Nation, throughout the entirety of her season of The Bachelorette and it's beginning to look like he may end the season by putting a ring on her finger. While audiences are still catching up with what Becca's suitor did while filming The Bachelorette, fans may be disappointed to see that there's nothing online indicating what Blake is doing after The Bachelorette other than watching and promoting The Bachelorette.

Perhaps Bachelor Nation has been spoiled by some contestants being very open on social media while their appearances on the Bachelor franchise are airing, but Blake seems to have been taking a step back from posts about his own life while this season of The Bachelorette has been on the air. He's seemingly inactive on Twitter and his Instagram has been almost exclusively images from his season of Bachelorette, which the occasional marathon shot peppered in. So fans know that Blake has been on the run – but that's about it. What has kept Blake off social media? Well, considering how well he's been doing on The Bachelor, it's possible that Blake doesn't have a lot to share right now because of his involvement with the show, or other shows in the Bachelorette universe. These are our only guesses.

He Could Be Busy With Becca, His (Possible) Fiancee

Despite some late-game anxiety that his connection with Becca wasn't as strong as some of the other men on the show, Blake has been a stand-out contestant during this season. He may not be posting a lot about anything other than The Bachelorette because to post anything from his own life may end up spoiling the entire season. If Blake and Becca end up together at the end of the season, then Blake may be hiding their engagement period together until his proposal makes its way to television.

Blake Could Be Busy Filming Bachelor In Paradise

The upcoming season of Bachelor In Paradise is chock-full of alumni from Becca's season, including dramatic duo Jordan and David, as well as fan favorites like John, Connor, and Grocery Store Joe. With so many people making the jump from Becca's season of The Bachelorette to Bachelor In Paradise, it's possible that Blake could stop there should he not end up with Becca. While the heartbreak of coming in second or third place may leave him a little vulnerable for the breezy, laid-back atmosphere of Paradise, it's the next logical step while he's in search of love on television. Unless, of course...

Blake Is The Next Bachelor & Is Busy Preparing For His Season

Just as Becca went from runner-up in Arie's season to Bachelorette of her own season of television, Blake could be getting prepared to start his own search for love. If Blake is preparing to be the next Bachelor he may be keeping the social media audience at a distance as to not reveal how his own life could be shifting because of his involvement with the show. While filming of The Bachelor is likely a few months away at least, it's still possible that preparation for the show could involve a kind of media blackout where he doesn't post much about his own non-Bachelorette life.

While the show may be affecting Blake's silence on his social media outlets, there's also a chance that Blake is simply trying to keep his private life and public life separate. Blake's involvement with The Bachelorette has flung him to fame with over 200,000 followers on Instagram in just a few months. If fans don't know what Blake has been up to since filming The Bachelorette, it seems that's because Blake doesn't want people to know.