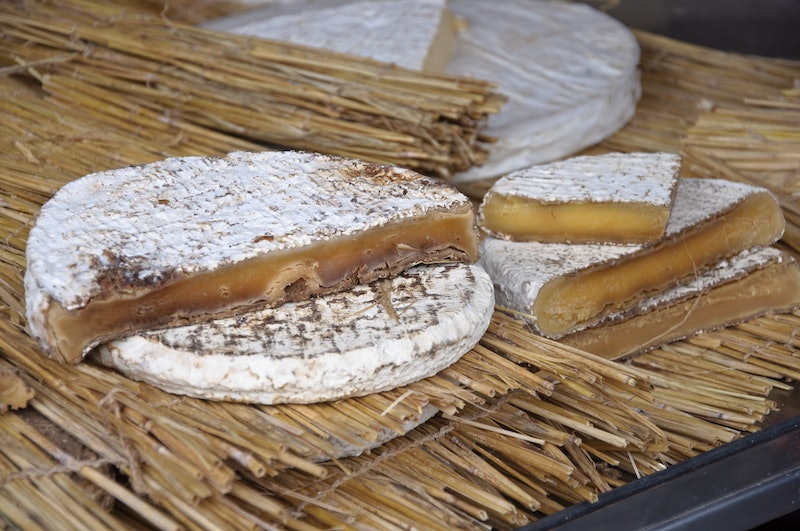 Maybe you can toss together a cheese plate in ten minutes and give a lecture series about the true definition of fresh cheese, but I'm here today to tell you that you don't know all there is to know about cheese. If I were to ask you what Brie Noir is, for example, you would probably be stumped unless you happen to live in the specific region of France where Brie's mysterious older cousin is typically found.

Yes, you read that right. Brie — the soft white cheese used to class up dinner parties across the world — has a not-so-distant older relative. A culinary black sheep, if you will. I'm just saying, if types of cheese were soap opera characters, Brie Noir would be the prodigal son who just returned from a stint as a member of a biker gang.

In the event that florid anthropomorphizations don't give you a proper idea of what to expect from this type of cheese, here's the rundown on Brie Noir.

First, as you can guess from the name, Brie Noir ("Black Brie" in English) is several shades darker than creamy, white traditional Brie. Charles Duque, general manager for the French Cheese Board, explained to Bustle that the actual cheesemaking process is the same, but Brie Noir is simply aged longer. "Brie Noir is an aged Brie de Meaux, most of the time," he wrote over email, adding that it is a "specialty coming from ancient times, when nobody was throwing a piece of cheese away."

While most Brie is typically aged five to 10 weeks, Brie Noir is aged for months before consumption. During that time, the cheese goes from gooey to crumbly — closer to the texture of Parmesan than regular Brie. The taste is, er, unique. Atlas Obscura writes that "even experienced cheesemongers can find the taste of Black Brie disconcerting."

"The texture is breakable and dense, with an intense chewing, reminding of chocolate," Duque explained. "The taste is way more subtle than what you can expect, a rare sensation mixing toffee, caramel like [sic] hints and farm animal ammonia at one point. In a few words, better than what you fear!" He suggested pairing it with apple cheese jam, Irish dark beer, or a French Pineau.

Given that aging cheese usually strengthens its taste, it's no wonder Black Brie is so flavorful. According to Atlas Obscura, some locals even dunk it in coffee, although Duque notes that the practice is falling out of fashion.

For anyone wondering why the heck anyone decided to take a perfectly good round of Brie and chunk it in the corner for months before eating the moldy result, there's an explanation. No, it's not so that the Brie could have time to develop severe emotional issues and pick up smoking underneath the bleachers after school to look cool. While Brie has a history of being served to nobility (even royalty), Brie Noir is associated with peasants. According to So Cheese, the lower classes would place any Brie that wasn't up to scratch — rounds that were misshapen or too dry, for example — in the cellar to age. Although it wasn't fit to be called Brie, allowing it to ripen meant even a cheesemonger's mistakes could still be eaten.

"The unsold cheeses could be kept after a drying that allow them to last longer… no matter the taste," Duque wrote to Bustle. All cheese, after all, is still good cheese.

The result of the extra aging was Brie Noir, which was sold to laborers and other peasants at a lower cost. The harder texture lent itself well to the lifestyle of manual workers, from grape pickers to World War I soldiers, because it could be kept longer. (Pro tip: With its tendency toward oozing everywhere, Brie isn't the kind of cheese you pack for a long journey.)

If you've made it this far into the article, you must be desperate to know how you can get your hands on the black sheep of the Brie family. Tragically for cheese lovers everywhere, though, it's not widely available outside of the Seine et Marne region of France, which is about an hour outside of Paris. The cheese is mainly enjoyed by locals, although So Cheese noted a "renewed level of interest" in Brie Noir a few years ago. Duque agreed, explaining that it is a Seine et Marne specialty. "It’s coming back on the market. ... In Paris quality Cheese shops, you can find some pretty easily," he wrote.

So if you're in need of a reason to check out the French countryside, perhaps Brie Noir is what you've been looking for. Otherwise, you may have to content yourself with its creamy cousin. Either way, it's cheese o' clock somewhere.