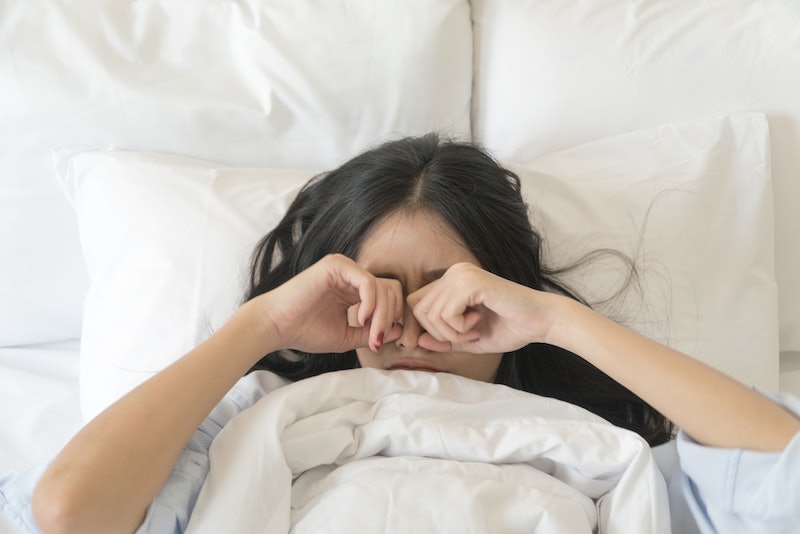 The quest for a good night’s sleep feels, in many ways, eternally relevant. While getting better sleep is one of the top health and wellness trends for 2019, troubled sleepers are not a new phenomenon. An estimated 50 to 70 million U.S. adults have a sleep disorder of some kind, according to the Sleep Association of America, with insomnia being the most common sleep disorder. And approximately 25 percent of Americans develop acute insomnia (which lasts for days or weeks) each year, found a study from the University of Pennsylvania School of Medicine.

Enter cannabinol. Also known as CBN, it’s a cannabis-derived compound that’s been linked to helping with sleep — and is also being hailed as the next big thing in wellness. While CBD is more associated with general calming and relaxation effects, CBN is being incorporated into new products like oils and sublingual strips as way to assist in getting a better night's sleep.

“CBN works by interacting with the body's natural endocannabinoid receptor system, which influences our intrinsic hormones and neurotransmitters,” Dr. Niket Sonpal, a New York-based internist, gastroenterologist, and adjunct professor at Touro College of Osteopathic Medicine, tells Bustle. “This then translates into changes of mood, energy, appetite, modulation of pain, and even sleep.”

More specifically, CBN initiates a response via the cannabinoid receptors CB1 and CB2, says Dr. Jaclyn Tolentino, a Parsley Health Los Angeles physician. “The CB1 receptor is expressed in the brain in areas related to pain, memory, anxiety, depression, appetite, and nausea,” Dr. Tolentino tells Bustle, while the CB2 receptor is “expressed throughout the body, including in the immune system, the peripheral nervous system, and the skeletal system.”

As for how it might help you sleep, Dr. Tolentino explains, “CBN binds primarily to CB2 receptors, where it produces a reported pain-relieving effect among users. This may account for its reported benefit as a sleep aid.”

With the rising popularity of CBD-infused products, you may be wondering why you haven’t heard as much about CBN yet. The slower trickling of products featuring the ingredient is at least in part due to federal regulation and the legal gray area surrounding the status of cannabinoids, Verena Von Pfetten, co-founder of Gossamer, a cannabis lifestyle brand and biannual print publication, tells Bustle.

Another one of the reasons CBN is lesser known is because it naturally forms much more slowly than CBD, and in much smaller quantities, meaning CBD is easier to manufacture. “[CBN] is a lot harder to extract and form than CBD,” says Von Pfetten. “You can grow a high CBD plant, but CBN is basically degraded THC that is aged out.” (This also means that, unlike CBD, CBN can appear in very lightly psychoactive or non-psychoactive forms, according to Steep Hill, a California-based cannabis testing and research lab.)

The potential side effects of using products with CBN, other than sedation, include the potential for intoxication, says Dr. Alex Capano, medical director of Ananda Hemp. Dr. Sonpal says that while CBN is a powerful sedative, and research in mice has shown that it may prolong sleep, there are no viable studies in humans that demonstrate this effect.

Dr. Tolentino also says that further research on CBN’s benefits is needed, as claims of its uses as a sleep aid are largely anecdotal. “Having said that, the very real value of a treatment, as reported by a patient, isn't negated by the lack of available data to support the mechanisms for its efficacy,” she says. “[W]e certainly cannot discount the experiences of the individuals who have reported beneficial effects from the use of CBN just because we lack the available data to explain it.”

Despite the lack of scientific research, Dr. Capano says that she sees anecdotal evidence of the efficacy of cannabinoids including CBN “in patients every day.”

While extensive testing still needs to be conducted on the effects of the compound, some scientific evidence from the early 2000s suggests that CBN may be useful in the development of future pain-relief and anti-inflammatory drugs that don't have traditional medical side effects. A more recent overview of cannabis and its effects on sleep and health noted that “hundreds of other compounds exist in cannabis products...which can also impact sleep and wakefulness,” specifically citing CBD and CBN as examples. Notably, the recent federal legalization of hemp will allow researchers to further study these compounds’ potential uses as medicinal treatments for issues like sleep.

Von Pfetten and Dr. Capano advised that consumers should be wary of any products boasting isolated cannabinoids (like 100 percent pure CBN, for example), as CBN in particular works synergistically with CBD. “They’re more effective when you have little bits of a few of cannabinoids, rather than pure CBN,” says Von Pfetten.

It’s also important to remember that each individual will react differently to CBN and other cannabinoids, meaning that even if CBN works anecdotally for one person, it may not for someone else. If you’re considering trying out products with CBN in them, talk to your doctor or a medical professional first, especially if you’re already using other prescription or over-the-counter pharmaceutical sedatives.

The trend for cannabinoids in general, Von Pfetten says, will be a boom in full-spectrum hemp products that feature many cannabinoids and are effect-specific, focusing on how a consumer wants to feel and finding the product that will help them get there.

More like this
Got Brain Fog? Here Are The Best Supplements For Memory & Cognition
By Carolyn Steber
Here's Why Your Knee Hurts When You Bend It
By Carolyn Steber
It's A Pleasure #53: Help! My Boyfriend Won't Tell Me Why He Stopped Going Down On Me
By Sophia Benoit
Kourtney Kardashian Says She “Loves” The Changes To Her Body Caused By IVF
By Jake Viswanath
Get Even More From Bustle — Sign Up For The Newsletter