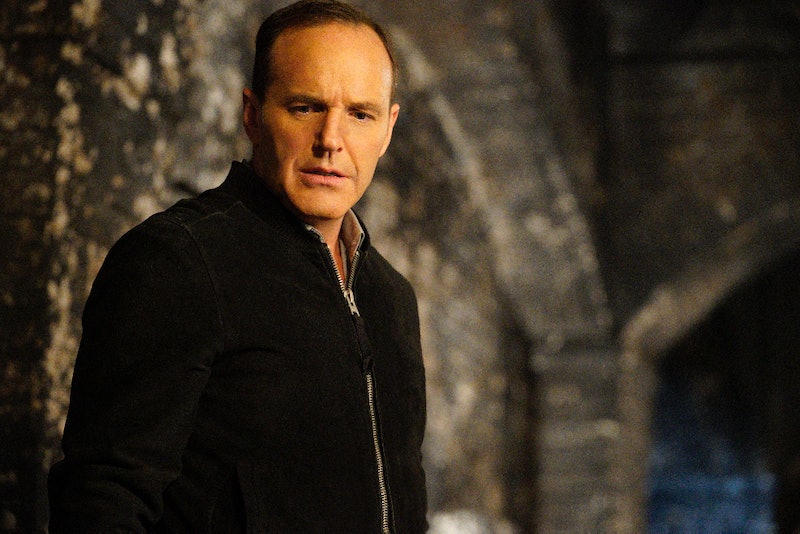 Aida has finally been defeated on Agents of S.H.I.E.L.D. — but at what cost? Coulson becomes the Ghost Rider temporarily to take her down, which was definitely cool to watch. However, it seems that Coulson has a new secret on Agents of S.H.I.E.L.D. connected to Ghost Rider, and one that he's not quite ready to reveal to the team. Does it have something to do with why Coulson ends up in space prison?

It seems that either he struck a deal with Ghost Rider and made some sacrifice, or Ghost Rider knows something about Phil that the others don't. Robbie says that he didn't envy him. Has Coulson willingly replaced himself with an LMD? Is he sick? Did he sell his soul to the demon? Now, not only are my Philinda 'shipping dreams on hold, it seems, but I'm genuinely worried about the team leader once again.

One of my favorite things about Agents of S.H.I.E.L.D. is that in the case of Phil Coulson, they never let him off easy for having survived death in The Avengers. This show isn't a retcon in the slightest... though the way they expand on Hydra's origins is a little shady. On a personal level, there are consequences for what Nick Fury did to get his right hand man back. However, I'm guessing this deal with Ghost Rider goes beyond the fact that Coulson has already died and been resurrected once or twice.

I think the people who came to collect Coulson, and possibly other members of the team, at the end of the episode were not connected to this mysterious demon deal. That's something he's going to have to reveal in his own time. When Agents of S.H.I.E.L.D. returns for Season 5, we'll see how this deal affects the already Framework-shook Coulson and the team.