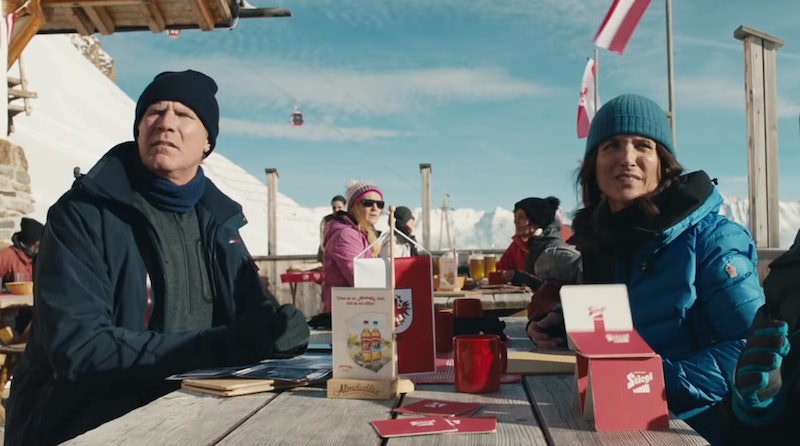 Downhill is a new dramedy from directors Nat Faxon and Jim Rash premiering this Valentine's Day, Feb. 14. It follows Pete (Will Ferrell) and Billie (Julia Louis-Dreyfus) Staunton, a married couple on the rocks after a natural disaster scare during their family ski vacation. But it's less survival adventure and more of an edgy comedy, judging by the movie Downhill is originally based on.

Fans of a certain dark comedy from a few years ago might recognize the storyline, as Downhill is a remake of Force Majeure, originally directed by Swedish filmmaker Ruben Östlund (The Square). It premiered in France, Norway, and Sweden back in 2014. Deadline confirmed in 2018 that Downhill was a remake when they first announced that Ferrell and Louis-Dreyfus were joining the project. Downhill also follows many of the same story beats set out in Force Majeure. There's an avalanche on a ski trip, which impacts a married couple traveling with their children, who have their share of arguments in front of other couples at friendly gatherings.

In 2015, Östlund spoke with Interview Magazine about his unexpected inspiration for Force Majeure. He said, "When I was around 20 and 25, I was skiing in the Alps, and a little bit in North America. I have been looking for a way to get back into that environment; to do something in a ski resort." But, he wanted to twist things up a bit, and bring something extra to the otherwise "kitschy" setting. He continued, "There’s not many existential things taking place there. But then I saw a YouTube clip of a group of tourists sitting at an outdoor restaurant watching an avalanche tumbling down a mountain, and I got interested in the three seconds where the cheering goes from 'Wow!' to total panic."

Those viral videos inspired one of 2014's best films, and now that movie has inspired this new retelling, complete a cast filled with some of America's most prominent comedians.

More like this
Gerard Butler Insisted On Adding This Pivotal Scene To 'Plane'
By Catharina Cheung
Jemima Khan Used Her Own Life As Inspo For 'What’s Love Got To Do With It?'
By Darshita Goyal
Owen Thiele Asked Sundance Attendees About Films That Don’t Exist
By Grace Wehniainen
Jennifer Coolidge Hunted For Jewels & Lashes In J.Lo’s Hotel Room
By Jake Viswanath
Get Even More From Bustle — Sign Up For The Newsletter
From hair trends to relationship advice, our daily newsletter has everything you need to sound like a person who’s on TikTok, even if you aren’t.