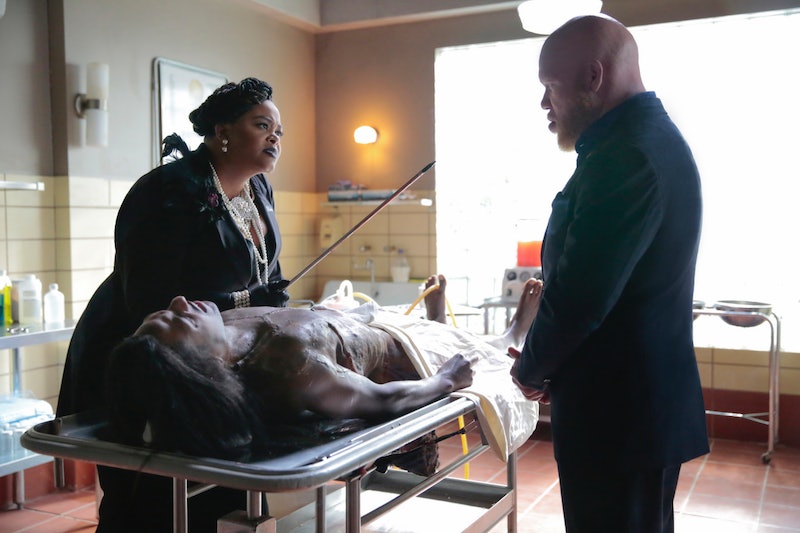 It's only a few episodes in, and Black Lighting has quickly taken a turn to the dark side. With the return of the titular superhero, crime is on the rise in Freeland as the 100 gang try to maintain their power over the community. In addition to prostitution rings at the Seahorse Motel and citizens being gunned down left and right, substance abuse is running rampant. What is “Green Light” on Black Lightning (executive producer: Mara Brock Akil)? In the fourth episode, "Black Jesus," Black Lightning is forced to restrain a student using the oddly-named drug and the consequences of ingesting it are dire.

The episode kicks off with Jefferson bursting into a school bathroom and finding one of his students, Bernard, cowering in pain and rage after taking Green Light. Bernard tries to fight the side effects of using the drug, but instead he becomes violent. While under the influence, Bernard pulls a urinal off of the wall and lobs it at Jefferson's head. Now, normally Jefferson would refrain from using his powers in public, but when Bernard comes charging at him, Jefferson is forced to shock him — twice. Jefferson reaches into his pocket and removes two little green tablets — i.e. Green Light — the source of this whole ordeal.

According to Gambi, Green Light is a mix between crack and PCP. He discovers that the drug is incredibly powerful, and because of the way it infiltrates a person's nervous system, all it takes to get hooked is one taste. Gambi tells Jefferson that nearly 36 people have overdosed on Green Light thus far in Freeland. And Gambi's surprised that the growing epidemic hasn't made local news. It should, but as Jefferson points out to Gambi, Black kids overdosing has never been particularly newsworthy. Even in a fictional world.

But why is the drug called Green Light? Being that the drug is the brainchild of the 100 gang, the name is pretty ironic. According to Urban Dictionary "Green Light" is a term used by gang members when a gang has a hit out on them, or can be used to describe the act of putting a hit out on a particular person or on all members of a rival or seceding gang. On Black Lightning it's clear that the 100 gang is out to get the citizens of Freeland, hence the decision to push a drug named Green Light on them.

Lately, Anissa has been coming to grips with her powers — still unbeknownst to her parents. Driving through town one morning she manages to stop two of her students from purchasing Green Light and scolds the dealers for selling that junk to their "own people." Of course, the two dealers shrug off her comments and hurl slurs at her as she walks away, because they clearly don't know who they were dealing with.

Meanwhile, Black Lightning is sent on a wild goose chase to find the source of Green Light. Unfortunately though, the 100 gang has gotten increasingly savvy about where they do business. Even though he's unable to find where the drug warehouses are located, Black Lightning saves Bernard from a crack house after he relapses and goes searching for more Green Light.

Much like Black Lightning, Anissa has grown tired of just marching, praying, and waiting for the police to keep the community safe. Thus she decides to take matters into her own hands and goes to visit the aforementioned drug dealers where she uppercuts them into oblivion, hopefully ensuring they'll never deal Green Light again. But that might just be wishful thinking.

With Black Lightning no longer being the only person on his tail, Tobias has become increasingly obsessed with killing the vigilante. Maybe this rise in Green Light usage — which brings out people's most primal instincts and super strength — is a way for Tobias to build an army that can wreak havoc on Freeland and almost match the power of Black Lightning. In an interview with Entertainment Weekly, executive producer Salim Akil explained that "[Green Light] will be the crux of the season in terms of how drugs enter a community, how a community is exploited, and Black Lightning sort of working himself up the food chain of discovering where it comes from and who put it there.”

One thing is for certain: despite the best efforts of Anissa and Black Lightning, Green Light is going to be a huge problem for the rest of the season. And with Gambi still not letting Jefferson know that Tobias — aka the boss of the 100 gang and this whole Green Light ordeal — is back in town, a solution is nowhere in the foreseeable future.