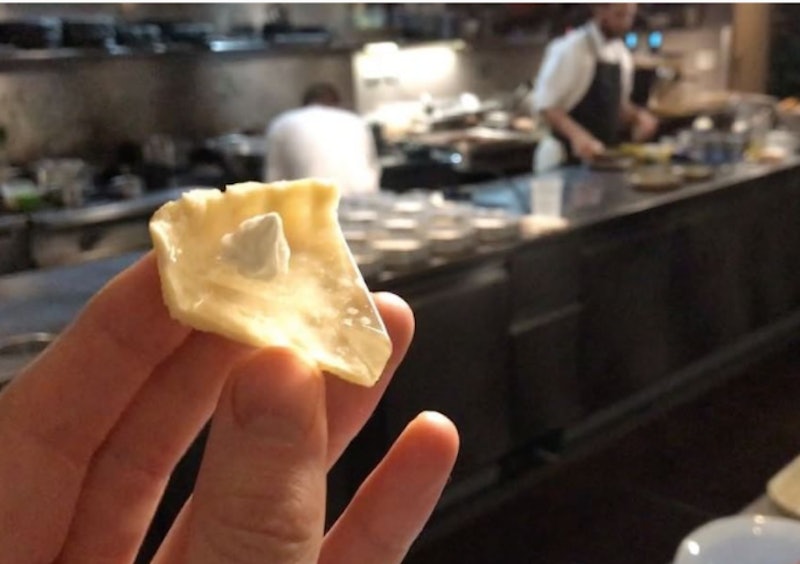 You’re familiar with pumpkin pie, right? Buttery crust, custard filling, tastes like cinnamon and nutmeg and everything delightful about fall? In your mind, what color is the Platonic ideal of pumpkin pie? Isit orange? I bet it’s orange. Well, prepare yourself, because this clear pumpkin pie at Alinea, one of Chicago’s — and, indeed, America’s — most lauded restaurants (it’s got three Michelin stars), will challenge everything you thought you knew about the classic dessert. Naturally, it is taking Instagram by storm, because, well… just look at it. It looks like Jell-O, but tastes like pie. I find it very confusing, but also intriguing — and, understandably, so does everyone else.

Created by Simon Davies, Alinea’s Chef de Cuisine, the first video of the unusual dessert hit Instagram on Sept. 24; Davies captioned it, “Pumpkin pie for the fall menu,” and tagged it with the hashtag #surrealism. It’s only in recent days that it’s started to go viral, however, no doubt helped by additional appearances on the Instagram accounts of Alinea co-founder Grant Achatz and professional chef network Chef’s Roll.

The big question, of course, is what, exactly, clear pumpkin pie is. A lot of folks have been asking in the comments to Davies’ post whether the dessert is a pumpkin pie consommé (basically pumpkin pie broth) with gelatin added; however, it appears that it’s not. Davies replied, “It is a distillation of pumpkin, cinnamon, ginger, and clove. Texture is very important to us. This melts away. If it were over-gelled it would not be worth serving. The main texture that brings on nostalgia is from the pâte brisée” — pâte brisée being a type of shortcrust that both uses much more butter and isn’t as sweet as what we typically think of as pie crust.

It’s also exactly the kind of innovative food stuff one would expect to come out of Alinea. The restaurant originally opened on May 4, 2005; for its 10-year anniversary, however, it was completely reimagined, with what’s sometimes referred to as “Alinea 2.0” reopening in May of 2016. The current incarnation of Alinea offers three different experiences, all of which are very much classified as fine dining: The Kitchen Table, which “offers the most intimate, immersive, and cutting edge experience at Alinea” for parties of six at $385 a head; the Gallery Menu, which is a “multi-sensory 16-to-18 course menu … with experimental moments” for parties of two or four at $285 or $345 a head, depending on the day; and the Salon Menu, a “more approachable,” yet still innovative 10-to -12 course tasting menu for parties of two to six at $175 to $225 a head.

All of which is to say that most of us probably won’t be swinging by anytime soon (unless you happen to have the financial freedom to be able to do so, in which case, a) more power to you, and b) if you go, please report back, especially about the clear pumpkin pie).

Still, though, the internet exists for a reason — for many reasons, in fact — and in this case, those of us who have neither the funds nor the proximity to test out Alinea’s fascinating-looking dessert can use the internet to live vicariously through everyone else. Here’s how folks are reacting to it: