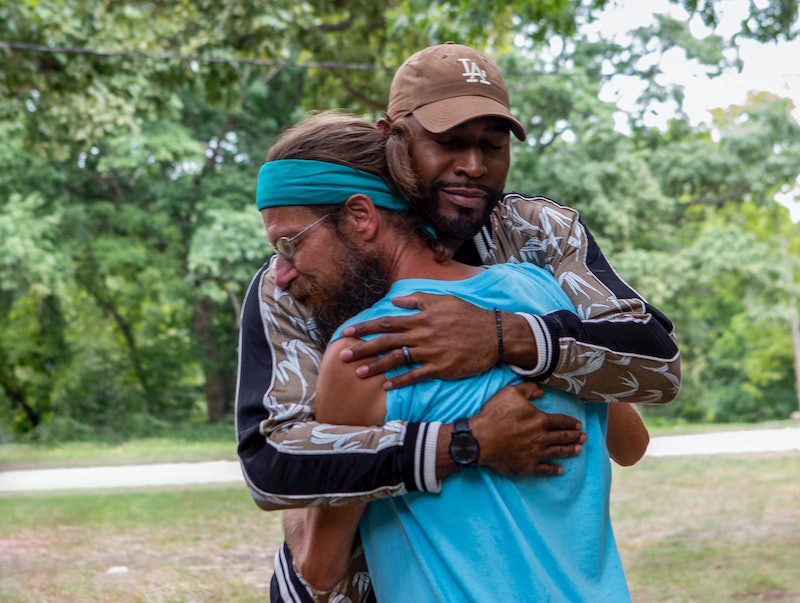 Bobby Berk, Karamo Brown, Tan France, Antoni Porowski, and Jonathan Van Ness get campy — as in, literally go to a camp — in Queer Eye Season 3 when they meet Joey Greene. The program director at Wildwood Outdoor Education Center, Joey from Queer Eye admits he has a bit of Peter Pan syndrome before the Fab Five show up. He was previously living in a cluttered RV, but the guys help to make his new apartment at the camp a more adult home. They also assist him with connecting to his 13-year-old son Isaac, who spends the majority of his time living with Joey's ex-wife. And where Joey is now will make you feel even better about this Queer Eye transformation.

Joey recently got promoted to program director, which gives him a more permanent home for himself and his son since he had spent years living in the RV. (As Bobby noted, the cupboard under the stairs that Harry Potter lived in at the Dursleys was apparently better than the space Isaac had to sleep in in the RV.) He also used to have a dependence on alcohol, which he's since kicked, as he opened up to Antoni about. So the Fab Five was mostly there to give him more confidence in himself and clean up his act a little bit — again, literally, since he wasn't big into showering or deodorant.

As Queer Eye Season 3 just filmed in summer 2018, Joey is still on the staff at Wildwood Outdoor Education Center. He has an active LinkedIn profile, which also reveals his art background that he briefly mentioned to Karamo. Along with his job as program director at Wildwood, he listed himself as an artist and coach for ComedyCity in Kansas City, Missouri. His LinkedIn notes that he started with the group when it was named ComedySportz, when he was just 18 years old. He also spent time in Ohio where he started his own repertory theater company for improv called SmartyPants Theater Co.

As shown on ComedyCity's social media pages, he has taught basic improv classes. And on his ComedyCity bio, he noted that he has performed for seven different improvisational theater groups over the years. He also posted on Facebook just one week before his Queer Eye episode dropped about a stand-up comedy benefit for Camp Encourage, which provides camp experiences for young people with autism spectrum disorder. While he didn't perform at this event, he wrote that he was involved in the community — which is fitting since it mixes his loves of comedy and camp.

Besides improv, Joey also has a band that he performs with. They are listed as a "bubblegum punk" band based in Lawrence, Kansas, and Joey plays bass and provides backing vocals. Their latest album released in October is called Love Songs for the Queers, so it may have been in honor of his time with the men of Queer Eye.

Although it doesn't appear that Joey has his own public Instagram or Twitter, you can follow what Joey is up to through his performance groups' social media. Plus, Wildwood's social media recently posted videos of Joey teaching how to tie knots, and he was the camp's featured staff member on March 1.

While Joey clearly needed a little intervention from Antoni, Bobby, Jonathan, Karamo, and Tan, he appeared to have a full life before the Queer Eye guys entered it. Now he just has the tools, home, and appearance that demonstrates that to the world.