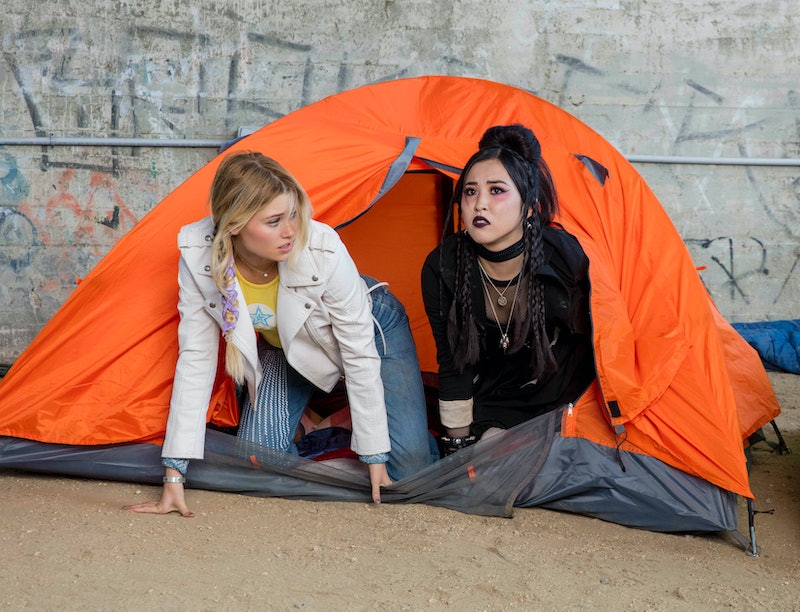 The kids are not all right on Runaways, whose Season 2 premieres Friday, Dec. 21, on Hulu. The fledgling superheroes had a rough time last season for a variety of reasons, but mainly because they discovered that their parents were actually supervillains. As if teenagers didn't have enough to deal with already. But out of the six kids on Runaways, Karolina Dean (Virginia Gardner) is still learning the most about herself. And whether she's even a human.

The Church of Gibborim devotee started Season 1 passionate about her mom's religion and attending services. However, that was before she realized that her mom, Leslie Dean, wasn't the upstanding citizen Karolina believed her to be. Even more troubling, her biological father turned out to be a mysterious being named Jonah, not the man who raised her, Frank Dean. Talk about an identity crisis.

Jonah, for the uninitiated, was a flaky, nondescript alien who became young again after Pride made sacrifices. Viewers learned last season that he was the one who granted Pride their success, and every year, he collects the debts owed him. And while the kids' parents don't exactly love killing innocent people year after year, they comply if only to keep their children safe. After all, they may be criminals, but they're still parents.

And yet even that wasn't all Karolina dealt with last season — she also went through a sexual awakening, realizing that she had the hots for Niko (Lyrica Okano) and consequently kissed her. Offscreen, the reactions were palpable. "[S]o many fans tweeted me saying they wish they had a character like her when they were 13 and confused about their sexuality," Gardner told Elle.com. And since Karolina is Marvel's first onscreen gay character, per Elle, Gardner understands — and welcomes — the responsibility. "I hope that [Marvel and Hollywood] keep going in that direction, because it’s so important to have characters that people can look up to and learn from, especially superheroes," the actor said in the same interview.

For this reason, it was poetic when Karolina realized her body could shimmer like a rainbow. What's more, she was able to...float and also shoot out light beams? Although she's not really sure how to control her powers yet, audiences are sure to see the former cult member grow into her abilities as the series goes on. Now that she's accepted the fact that she's an alien, she's ready to use it.

Viewers will recall that Runaways Season 1 ended with Karolina facing off with Jonah after their parents showed up at Pride's super-secret dig site. The kids — ready for it? — run away, which is no small feat when you've got a sizable raptor in tow! So what does all of this mean for the Marvel series' upcoming installment? According to a series preview on Vulture, Season 2 picks up right where Season 1 left off. The parents are shown being hounded by press, who are under the impression that their kids have been found.

But wait! When the members of Pride see their "children" at the police station, it's clear that the cops caught doppelgängers. The real runaways, meanwhile, chase after a guy on a bike. Audiences soon learn that he took their cash and Chase's robotic gloves while they were sleeping. Now, the kids will need to figure out how to survive without money, without parents, and without being caught. Sounds like an exciting set-up for Season 2.

The trailer also teases what's in store this season. "We're going to figure out how to use our powers together," Niko says. "As a team." And while teamwork is sorely needed, it looks like Jonah and Karolina will bond this season, which may spell trouble for the rest of the gang. What's more, Niko needs to figure out whether to stay with Alex, start dating Karolina, or neither.

The Church of Gibborim girl has a lot of identities to unpack this season, including her newfound paternity, newfound powers, and newfound sexuality. So whatever happens with her and the rest of the group this season, hopefully they'll thwart their parents' devious plan before it's too late. Their failure may cause earth-shattering results.