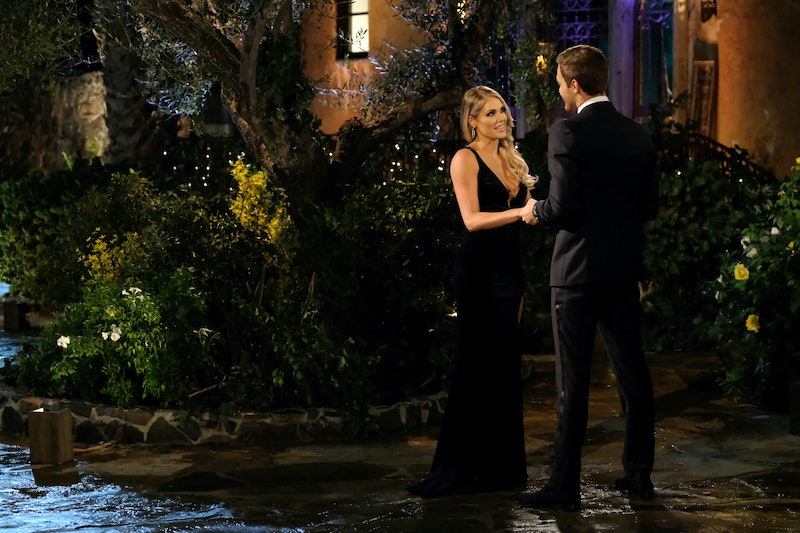 Even the best laid plans can sometimes blow up in your face, and for Bachelor contestant Kelsey Weier, that happened quite literally. After Hannah Ann (unintentionally?) stole the bottle of Dom Perignon Kelsey had set aside for her and Peter to share during a cocktail party, Peter comforted Kelsey by opening a different bottle of champagne with her — except that when she tried to take a swig, it exploded in her face. Since then, she and Hannah Ann have continued to argue, but based on what Kelsey is doing after The Bachelor, the 28-year-old is making the best of the whole "finasco." In fact, she's basically making it part of her personal brand.

The last four posts on Kelsey's Instagram are all about champagne-gate. "Note to future self: Never drink cheap champagne straight from the bottle," she wrote alongside a photo of her holding — what else? — a glass of champagne.

She also shared a slow motion video of the champagne exploding in her face captioned, "When karma hits you straight in the face," as well as re-posted a clip from The Ellen Show in which host Ellen DeGeneres digitally inserted herself into the champagne-gate altercation in place of Hannah Ann. Kelsey's most recent post is a video of her and the rest of the Bachelor contestants trying to catch popcorn in their mouths, which she aptly captioned, "The only thing I'll be popping today is popcorn."

Beyond that, Kelsey's Instagram shows she and Hannah Ann have mended fences since filming for The Bachelor wrapped. When Kelsey posted to announce she would be on the show with the caption "Secrets out! Tune in on January 6th to watch the premiere of #TheBachelor on #abc! Heard it's going to be poppin' #Champagnegate#cryingiscool," Hannah Ann commented, "We be poppin' this season #champagnegate ... #cheers to us."

Kelsey's response was just as friendly: "Cheers to us! Let the #Champagnegate begin," she wrote.

Kelsey hasn't had much else to say outside of champagne-gate, but photos from before The Bachelor premiered show she's been enjoying brunch, doing a lot of photoshoots, and spending time with friends for the holidays. "I'm dreaming of a white Christmas, but if the white runs out, I'll drink the red," she captioned a photo from December.

A woman who has a sense of humor and knows how to capitalize on self-promo? We have no choice but to stan.