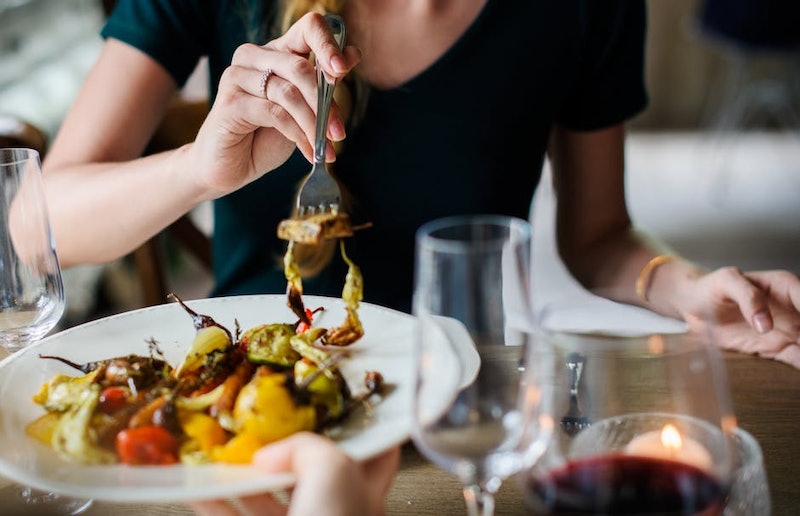 Today’s food for financial thought: What is “lifestyle creep,” and how can you avoid it? For millennials in particular, it’s an interesting conundrum — a lot of which has to do with the fact that many of us entered the workforce during an incredibly difficult economic time. That’s what Redditor u/elliefunt was getting at when they submitted a thread to the AskWomen subreddit today about lifestyle creep; specifically, the thread asked, “Have you experienced ‘lifestyle creep?’ What are your best tips for avoiding it?” Millennials are generally more responsible about money than older generations often give us credit for — but it’s always worth examining your own financial habits in order to track what we might be doing well and what we could be doing better. “Lifestyle creep,” it turns out, isn’t a black-and-white issue, so here’s what you need to know about it.

First, though, a definition. Investopedia defines “lifestyle creep” as follows:

“A situation where people's lifestyle or standard of living improves as their discretionary income rises either through an increase in income or decrease in costs. As lifestyle creep occurs, and more money is spent on lifestyle, former luxuries are now considered necessities.”

This in and of itself doesn’t necessarily have to be a bad thing. As Nicole Dieker noted at The Billfold back in 2015, there’s something to be said for some degree of lifestyle creep. Dieker’s piece centered around the fact that she had finally gotten a new phone after years of having one that increasingly didn’t work — and her life improved immeasurably because of it. However, it didn’t improve because she had a shiny new toy to play with; it improved because it allowed her access to a lot of incredibly valuable things, the most important of which was probably this: With a reliably-working phone, she was finally able to communicate better and more often with people she cared about.

That matters. Basic happiness matters. And items that help you achieve that kind of happiness in real, tangible ways — like simply being able to stay in touch with other people — well, it’s hard to classify that kind of lifestyle creep as negative.

At the time, Dieker lived in a “microapartment” — basically a room (not a studio apartment) without a lot of what many of us probably consider basic requirements for an apartment, like a kitchen. Finally having a functional phone, however, put Dieker on this line of thought:

“So, of course, the first thing I thought after that was ‘If this is what having a functional phone is like, I wonder what having a functional apartment will be like.’ Imagine how my life could change if I had a home that could be a resource to myself and my friends, instead of just a space to put my standing desk and look out through the internet at the rest of the world.”

She did eventually move out of the microapartment and into a “proper” one. Could she have continued to live in the microapartment? Yes. But, like what happened when she got a new phone, her quality of life improved greatly once she was financially secure enough to upgrade, and that, I would argue, is worth it.

A number of Redditors in u/elliefunt's thread also had similar experiences. Wrote u/Dakizo:

“It's not so much that former luxuries are now necessities, it's more that I feel like I'm living like a regular person now. I don't have to choose between toilet paper and food. I don't have to wait until I get paid to buy said food. I can afford to have internet in my home and have a smartphone. I'm driving a car that isn't going to break down 6 times a year. I own a house instead of renting. So far the lifestyle creep is pretty nice and I like it.”

“[Is lifestyle creep always a bad thing?] I don't think so. After college, I was so broke that I ate beans and rice every day for dinner. I rarely went out to eat or bought new clothes or did things like go to movies. Etc., etc.

"Now, I'm in a stable career, and I go out to eat a few times a week. I don't shop too often, but I also don't feel guilty splurging now and then. I bought a gym membership and adopted a cat, both of which I never could have afforded before. I don't think I could go back to where I was 5 years ago,and I assume that in 10 years, when I'm making more money, I'll have even higher standards of living.

"I don't see how it's bad, as long as you're smart about saving money too. You should enjoy your fatter paychecks!”

One commenter noted, “That's not a lifestyle creep, that's achieving a basic quality of life” — which is true. But it’s evidence that what constitutes “lifestyle creep” is relative, and often highly personal.

Where lifestyle creep starts to become an issue is when it takes the form of living beyond your means. It’s interesting that Investopedia’s definition doesn’t actually identify this aspect in particular; in that sense, it actually paints it as mostly a neutral thing, not an inherently “good” or “bad” one. A lot of the financial advice floating around out there, though, approaches lifestyle creep specifically from the angle what to do if you’re living beyond your means— that is, how to avoid, prevent, or reverse lifestyle creep. Thomas C. Corley of Rich Habits, for example, described in a recent piece for Business Inside how several of his clients had fallen prey to lifestyle creep: When their incomes began to rise, they spent it on expensive homes, new sports cars, and other luxuries, only to find themselves in trouble later on when the windfall was spent.

But for millennials, what causes lifestyle creep might vary. Redditor u/cheddarbiscuitcat wrote that, growing up, their family pretty much never went out to eat and would routinely travel extra-long distances in order to acquire the things they needed at cheaper prices. But, wroteu/cheddarbiscuitcat:

“Now that I make 2x the amount of money my family did when I was younger, I go out to eat all the time. Sometimes, 1-2x a week. Maybe not as much as being ‘overboard,’ but definitely way too much. I often find myself buying this stupidly expensive thing at one place even though I can easily buy it for cheaper at another because of ‘convenience’ and because ‘why not, I have the money.’”

Added u/standstagger, “I go on a ridiculous number of holidays a year and it's become normal to me. So I still have no more money for day to day/week to week life and I feel broke every month, but I'll have had five week long holidays this year.”

And, said u/sprengertrinker, “I found that my impulse buying online went up a LOT after I got ‘real’ job out of school, so I was effectively treading water savings-wise (although paying back a considerable amount of my student loans).”

Interestingly, though, a lot of these things fall under the heading of things we’re “supposed” to be spending on if we want our spending to make us happy: They're buying experiences, and they're buying things that save us time. And although most of the Reddit users commenting on that particular thread either explained how they budget to avoid lifestyle creep or talked about what they’re doing to manage their lifestyle creep habits, there’s a point where asking if — as long as you’ve got the available resources to keep living as you’re living — whether your habits are making you happy. If they're not, what can you do about it?

Personally, I think WalletHack’s approach to managing lifestyle creep is the most useful: Some lifestyle creep is “healthy and natural”; the key is to limit or eliminate “lifestyle creep that doesn’t play a meaningful role in your life.” You don’t have to Marie Kondo your entire financial situation in order to avoid lifestyle creep; instead, it’s about making smarter choices: “Do you want to retire a year earlier or go on an extra vacation a year? Do you want to be able to help your kids with college or buy a nicer car?” asks WalletHack. “Since we can’t have everything, it’s about actively making choices so we pick — vacation or retire earlier. There is no correct answer.”

For millennials, it might looks something like, do you want to pay off your student loans earlier, or go on your friend’s bachelorette weekend trip? Do you want to spend a bigger amount now to upgrade your car immediately, or see if you can keep the old one going on less expensive repairs for a little longer before ultimately shelling out for a new vehicle? Do you want to keep living with roommates to save money so you can eventually retire sooner, or would you rather have your own space? Again, there are no right answers — there’s only what’s right for you.

A lot of Redditors point to paying attention to the difference between “needs” and “wants” as a way to keep lifestyle creep in check, and it’s sage advice. The thing to keep in mind is that what might be a “need” for one person might be a “want” for another and vice versa. Not sure where to start? Asking yourself these 15 questions might help you take stock of your financial situation and figure out where you want to go from here.

Good luck out there.

More like this
8 Money Saving Experts To Follow For Accessible Advice
By Maxine Harrison
These Are The 3 Most Mellow Zodiac Signs
By Kristine Fellizar
Here's Your Horoscope For November 23, 2022
By Mecca Woods
How Long Does Leftover Stuffing Last? Here's When To Toss It
By Chelsey Grasso and Alexis Morillo
Get Even More From Bustle — Sign Up For The Newsletter